One intern's idea to curb road rage in Calgary—with humour

The drive into Calgary is worth a chuckle, thanks to Joseph Kruis, an intern in the city of Calgary's transportation department 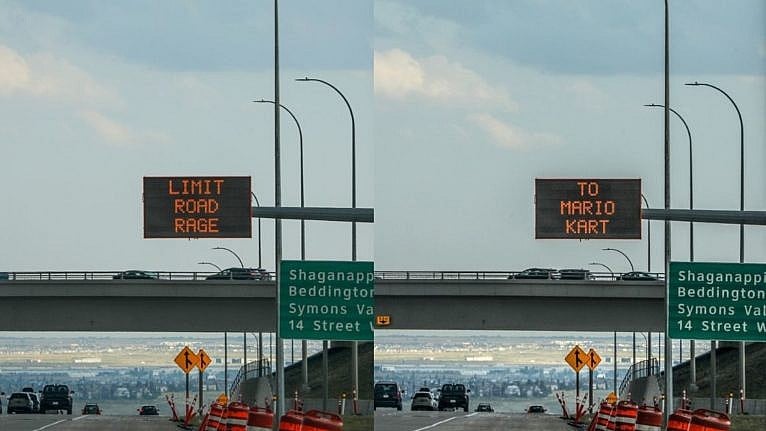 Every Tuesday after the workday has begun in Calgary, Joseph Kruis can count on a handful of friends to drop him texts or Facebook messages with laugh-cry emojis or remarks like: “nice one.” They’ll relay the pun or quip that made them chuckle a few minutes earlier, but Kruis is more likely to smirk than laugh out loud. He’s already heard that jokey message. Odds are he helped write it.

Kruis, 25, is the brains and wisecracking sensibility behind a new program that aims to bring a little joy to the humdrum commutes of Calgary motorists. Each Tuesday, several roadside digital signs along the city’s major routes take respite from their normally grey messaging in favour of something sunnier. Instead of “Airport Trail in 20 min” or “Incident in left lane ahead, expect delays,” a sign might read:

“Texting and driving? Oh cell no!”

During the Calgary Stampede, the signboards riffed on the naughty country song Save a Horse (Ride a Cowboy) with “Save a horse/Ride a cab home.”

READ: A doorway to a hidden past in Calgary

The city of Calgary’s transportation department calls them Traffic Tuesdays: each week, drivers are greeted with a message meant to bring awareness, safety messages and, ideally, a smile to their faces. City staff theorize that happy rush-hour drivers are less likely to succumb to road rage or make mistakes born of impulse.

The idea originated in a long-running safety campaign from Iowa’s freeway system, Message Monday. But it was Kruis who suggested his department adapt the program to Calgary’s roads after watching Iowans extol it during a webinar last November. He had only started work with the city seven months earlier as an engineer-in-training, working on various small transportation network improvements. He’d spend rush hours helping traffic technicians toggle traffic-light timing, reverse lane directions and switch messages on those digital signs.

When he was first learning the sign system, a thought about the messaging crossed his mind: “It’s dry, with no human touch. It would be kind of cool to de-robotize it, make it more of a human approach.” The Iowa program showed him how, and soon his penchant for everyday one-liners that sometimes make his fiancée’s eyes roll became part of his job.

Kruis’s supervisor readily embraced the idea, and civic managers leapt aboard—as long as they could vet the messages. There is an art to being funny on public roadside letter boards, Kruis and his colleagues have learned. First, with a maximum of 27 characters per sign frame, it’s vastly more restrictive than Twitter. Pop culture references such as “Baby Yoda uses The Force/But still needs a car seat” tend to be hits, as do ones that address driver pet peeves: “Camp in the Rockies/Not in the left lane” was a winner. In the rejects pile are messages that sound even remotely like swearing, such as July’s never displayed “Stampede is over/Slow the buck down.”

Iowa released its message archive to Kruis’s team, along with some warnings about their own missteps, including the use of overly grim maxims. That state’s transportation department got blowback for using “Crashes don’t kill teens; bad choices do.”

Calgary launched its weekly pilot program with the Baby Yoda car seat message (on May 4, a.k.a. Star Wars Day), causing bemusement among drivers who thought it might be a “May the Fourth” one-off. But when it was publicized as a regular feature, they embraced it. The city invited residents to submit their own ideas and got 250 within the first two weeks.

READ: A low carbon world is coming to Alberta

As Kruis inches toward full-fledged engineer status, his resumé already featuring a well-received new civic program, he marvels at having found that rare engineering post in which wielding quips is part of the work. “When I told my fiancée’s family about this project,” he says, “my future mother-in-law was like, gosh, he found a job that is totally up his alley.”

This article appears in print in the November 2021 issue of Maclean’s magazine with the headline, “Exit in two smiles.” Subscribe to the monthly print magazine here.