From Calgary to Winnipeg, Ottawa to Montreal, it's playoff time. Meanwhile, the Leafs stink. Obviously. 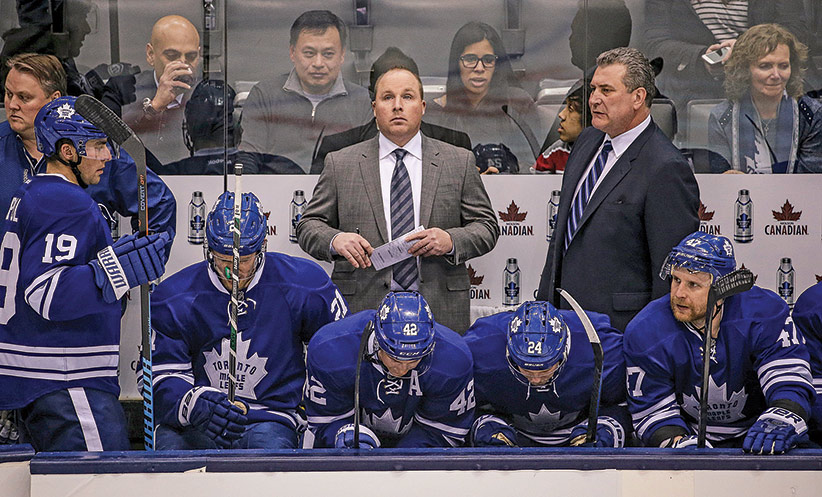 For hockey fans, spring is all about the rituals. In Winnipeg, they stopped traffic at Portage and Main when the Jets clinched a playoff berth. The “Sens Army” filled their rink to watch an away game on the scoreboard, then headed out to the Ottawa airport to greet their conquering heroes. The bars and restaurants along Calgary’s “Red Mile” are bedecked and ready for the throngs that will come together to cheer on the Flames. While in Vancouver and Montreal, there is the usual sense of smugness, soon to give way to impossible expectations or theatrical despair—and, quite possibly, riots, regardless of the outcome.

Handshake lines, playoff beards and seafood splatting on the ice are among the many other fun traditions that surround the annual hunt for the Stanley Cup. Unless you live in Toronto, where early April is remarkable only for the return of baseball season.

Related: Before the season, we went inside the NHL

The Maple Leafs celebrated the start of the NHL playoffs this week, in the same way they have in nine of the past 10 years—by packing up their belongings and slinking out of town. The shame-faced exodus is now familiar enough to have engendered its own rites and customs. A last supper with teammates before the media Judases descend. The perp walk to the parking garage so the photographers can get shots of twentysomething millionaires toting their worldly possessions in black plastic garbage bags, like a tribe of super-fit refugees. And a final dressing room inquisition where pointed questions about half-hearted efforts and a lost season are met with worn clichés and practised non-apologies.

“Obviously, we didn’t get the job done on the ice,” winger James van Riemsdyk intoned to a thicket of cameras and microphones. “We didn’t get the job done. We fell short and we have to answer for that,” Leafs captain, Dion Phaneuf, told an even larger scrum. “Obviously, I think there’s probably going to be some changes, but you never know what’s going to happen, so we’ll just have to wait and see,” said Tyler Bozak, climbing out on a limb.

Related: Dion Phaneuf, before the season: ‘I have to be better, and I will be’

“Obviously, we missed the playoffs two years in a row, so obviously we’re not in the place where we want to be as a group,” goaltender Jonathan Bernier almost opined. But it was left to the team’s leading scorer, Phil Kessel—25 goals and 36 assists—to put it all in perspective. “Obviously, I’m not happy about it. It was just one of those years,” he said while gamely sporting a Blue Jays cap. “Obviously, it’s tough. We didn’t get it done this year. And obviously, we’re not happy about it.”

To be fair, there was very little doubt surrounding the 2014-15 Toronto Maple Leafs. In early January, barely clinging to a playoff spot after losing seven of their previous 10 games, the organization fired head coach Randy Carlyle and promoted his assistant, Peter Horachek. The team responded by compiling the worst record in the NHL over 42 games, winning just nine times. The Leafs finished the year in 26th place overall, ahead of only Buffalo, Arizona and Canada’s other perennial disappointment, the Edmonton Oilers. Had the season been longer, they surely would have dropped further. In short, even by their own subterranean standards, these Leafs sucked.

Brendan Shanahan, a three-time Stanley Cup winner, who was brought in as club president after the Leafs failed to make last year’s playoffs, had also provided a hint or two. In advance of the March trade deadline, the team unloaded as many players as it could for prospects and draft picks. And then, on April 12, the day after the regular season ended with an overtime loss to the Canadiens, Shanahan fired his general manager, Dave Nonis, Horachek and his two assistants, the goalie coach, as well as almost two dozen scouts. At present, Toronto’s front office basically consists of the president and the stick boy. And there are more changes to come.

Meeting with the media, Shanahan promised that the firings were “just the beginning” of a complete organizational razing. The next task is to jettison many of the underachieving veterans earning big dollars. Obviously.

The rebuild won’t be quick. And the stated goal of capturing the franchise’s first Stanley Cup since 1967 lies somewhere in the distant future. Yet Shanahan says he believes Toronto fans are finally ready to embrace planned failures, if it will extract them from the endless cycle of unforeseen ones.

After the press conference, work crews were busy outside the Air Canada Centre wrapping entranceways with pictures of the Toronto Raptors and erecting huge banners with their slogan “We the North,” a celebration of a team that is destined for the NBA playoffs, which begin on April 18. The plaza outside, known as Maple Leaf Square, was empty but for a few fans getting ready for the Blue Jays’ home opener down the road at the Rogers Centre. How do you know it’s spring in Toronto? The Leafs are out.