Princess Charlotte's christening: a mix of old and new

A country baptism for the newest Windsor 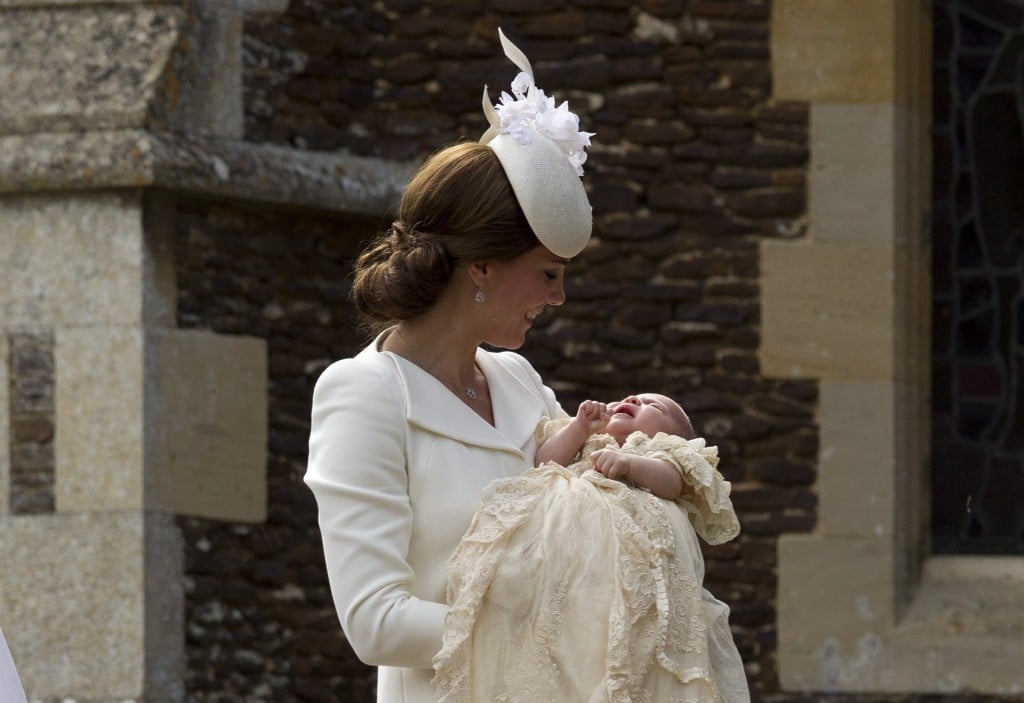 Britain’s duchess of Cambridge carries Princess Charlotte after taking her out of a pram as they arrive for Charlotte’s christening at St. Mary Magdalene Church in Sandringham, England (AP Photo/Matt Dunham, Pool)

The christening of two-month-old Princess Charlotte on Sunday was a mixture of tradition and modernity. It was, above all, a family occasion at the family church, though on a grander scale than most christenings, given the family is the house of Windsor and the parents’ 10-bedroom house is nestled in the Queen’s huge Sandringham estate in Norfolk. Yet only a score of family and friends gathered in the Church of St. Mary Magdalene.

It was the first time such a high-profile member of the family had been christened there since Princess Eugenie in 1990. As well, Prince William’s mother, Diana, was christened there in 1961 (at the time, her family was living in Park House on the estate). And its country setting allowed for a nice break from tradition. Since christenings are always private—usually in royal residences and chapels—there is rarely an opportunity for the public to see the comings and goings. However, at Sandringham’s church, there is the space, and a long tradition of crowds greeting the royal family, most famously, at Christmas.

Luckily, the pelting rain of the morning gave way to bright skies by afternoon, allowing the family to walk to church, William holding George’s hand, while Kate pushed a Millson pram holding Charlotte, which belongs to the Queen, and was used in the 1960s to hold Andrew and Edward. The royals never seem to throw anything out, though it helps to have really, really, big storage facilities.

Kate’s high heels nearly proved her downfall as she struggled to push the pram up a now-muddy hill to the church. (For fashion fans, Kate wore an ivory Alexander McQueen coat with a Jane Taylor hat, the same designers and colour worn for George’s christening two years before.) 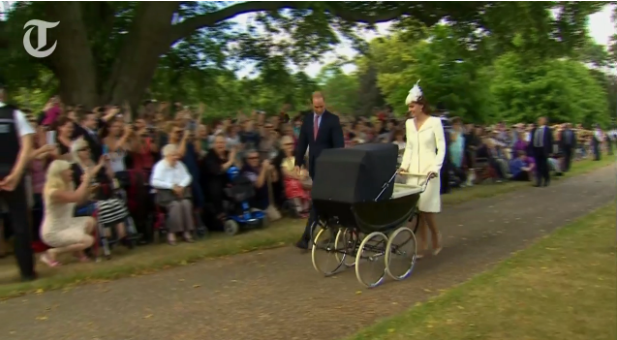 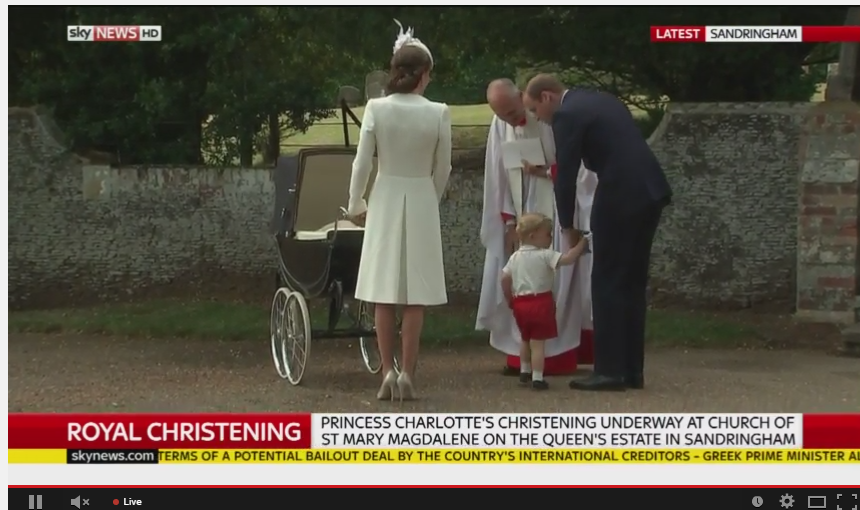 In addition to William and Kate’s immediate family (Prince Harry was absent, as he’s in Africa for a few months), the only other attendees were Charlotte’s five godparents. As expected, her parents picked friends and relatives to be her church sponsors.

William and his cousin Laura Fellowes at Duke and Duchess of York’s wedding in 1986 pic.twitter.com/eQhyiu8MnQ

In many ways, the low-key, very personal list was similar to that of Prince Harry back in 1984: The six godparents included an artist, as well as a flat mate of Diana’s, princess of Wales. Sure, there were royals, but they were Charles’s brother, Andrew, and his niece, Lady Sarah Chatto.  While this time, the godparents weren’t royal, the ceremony included tradition befitting the christening of Queen Elizabeth II’s great-grandchild, and the sister of a future king. Charlotte wore a replica of the elaborate family christening gown used since Victorian times. It was so fragile that a copy was made last decade.

The original Victorian lace and satin gown, worn at Royal christenings since 1841, has now been preserved. pic.twitter.com/kT8WE3PFMY

Two pieces of the priceless Crown jewels were removed from their vaults at the Tower of London, dusted off and packed for the trip to Sandringham. The gilt solid silver baptismal font, called the Lily Font for its iconography of water lilies, has been used for royal christenings since 1840. And the water, from the River Jordan, was poured from an elaborate silver pitcher that dates back to 1735. Also, the officiant was Justin Welby, the archbishop of Canterbury.

Princess Charlotte will be baptised in the Lily Font, commissioned by Queen Victoria and Prince Albert in 1840. pic.twitter.com/BBL9QcMCso — Kensington Palace (@KensingtonRoyal) July 5, 2015

Having the christening in Norfolk instead of London, or even Windsor Castle, where the Queen now spends much of her time, is also a nod to the fact that Prince William and Kate have made that area their primary home. They’ve settled into their newly renovated house, Anmer Hall, on the Queen’s estate, and made no secret that they want their children to spend much of their early years in the countryside. Kate is often seen taking George, nearly 2, to local attractions, such as Snettisham Farm.

As the Daily Mail‘s Richard Kay and Geoffrey Levy explained in a recent article: “William’s strategy in moving his family to live in Norfolk—becoming, as one aide puts it, ‘almost semi-detached royals’—has been to bring up his children as far removed as possible from the pressures and influence of palace life that he remembers only too well, from the formality of ever-present servants to the paparazzi.” While William’s mother, Diana, loved the bright lights of the city, the rest of William and Kate’s families are firmly attached to country life. Charles and Camilla are famously happy outside, tramping through gardens and fields, while Michael and Carole Middleton have always lived in semi-rural locales.

The parish church, where the Queen, her family and staff worship when at Sandringham, is “considered to be one of the finest carrstone buildings in existence, and dates back in its present form to the 16th century.” It may be a country church, but, with its royal connections, it boasts some rather spectacular additions. As the Sandringham website explains, “The sumptuously decorated chancel with its carved angels frames the silver altar and reredos presented to Queen Alexandra by the American Rodman Wanamaker as a tribute to King Edward VII. He also presented her with the silver pulpit and a silver 17th-century Spanish processional cross.”

After the baptism, everyone went to Sandringham House for a tea that included Charlotte’s christening cake, made from a layer of her parents’ wedding cake, and also to sit for the official pictures, taken this time by Mario Testino, whose snaps of Diana are iconic. If past photos are any indication, expect big brother George to steal the show. Here is a picture of Charles from 1950:

As for the flowers from well-wishers, they were donated to one of Kate’s favourite charities, the hospice EACH.

Should any well-wishers take flowers to Princess Charlotte’s christening today, they will be donated to EACH #royal — EACH (@EACH_hospices) July 5, 2015

This may be one royal event where politicians aren’t on the guest list, but, naturally, the prime minister got in a carefully timed tweet.

My best wishes to the Duke and Duchess of Cambridge on Princess Charlotte’s christening today. — David Cameron (@David_Cameron) July 5, 2015