Quebec isn't the only one targeting the unvaxxed. But is it moral?

Taxes and fines cross a red line, taking us down a road that one ethicist warns 'will do tremendous damage to our society' 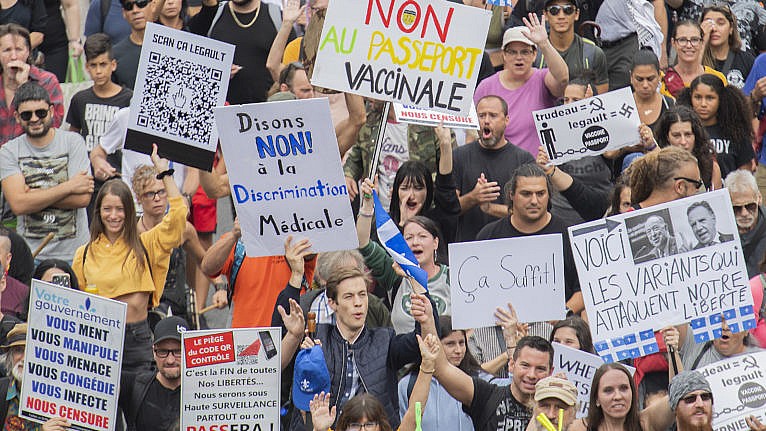 A September protest in Montreal against measures to help curb the spread of COVID-19. The Quebec government announced plans this week to tax the unvaccinated. (Graham Hughes/CP)

“I think it’s reasonable for the majority who are vaccinated to feel some emotion of resentment or to feel moral disapprobation toward the unvaccinated,” says Arthur Schafer, a bioethics professor at the University of Manitoba.

Those are strong words for an ethicist, and a measure, surely, of the point we’ve reached in this pandemic: the hospitalizations of so many unvaccinated mean pain for others, including having medical procedures such as cancer or heart surgeries cancelled or postponed. Around 500,000 surgeries were delayed in just the first 15 months of the pandemic in Canada, according to the Canadian Institute for Health Information.

Now, as hospitals around the world are again being overwhelmed by patients, many of whom aren’t unvaccinated, governments across this country and abroad are tightening the rules for those who remain unvaccinated.

French President Emmanuel Macron recently proposed new measures against the unvaxxed, including restricting their ability to travel by public means and barring them from communal venues such as restaurants, theatres and arenas. “When some make from their freedom…a motto, not only do they put others’ lives at risk, but they are also curtailing others’ freedom,” Macron said. “That I cannot accept.” And in Quebec, the unvaxxed now can’t enter liquor and cannabis stores.

The question is when those restrictions cross ethical lines, and even become counterproductive.

For bioethicists, who have grappled with a steady stream of moral dilemmas during this pandemic, there is a big difference between rules that restrict access to non-essential venues, and the imposition of taxes. “I think vaccine mandates—restrictions on who has access to restaurants, gyms, concerts, sporting events, liquor stores, bingo halls—are all justifiable,” says Schafer.  They protect the health-care system, those who work in those places and other patrons, he says.

Kerry Bowman, a bioethics professor at the University of Toronto, agrees that such restrictions are, in principle, fine during a pandemic, though he’d like to see consistent operational definitions of what is and isn’t governed by such rules (such as buying alcohol, which now requires vaccine proof in Quebec but not in Ontario).

More controversial is a new trend for governments to impose a tax, fee or levy on those who are unvaccinated by choice  (as opposed to those who have very real and rare medical reasons why they can’t be vaccinated and are exempt from such levies). This week, Quebec Premier François Legault said his government was considering such a plan, though the exact mechanism and amount aren’t clear.

As of now, at least three countries have either announced or are implementing plans to essentially tax the voluntarily unvaccinated.

However, to many experts, such governmental decisions cross a bioethical red line. “In Canada, people are allowed to make any kind of medical decision they choose, as long as it’s informed,” says U of T’s Bowman. “The line we are crossing is, ‘We don’t like the decisions you’re making.’” To him, such fees are essentially punitive, putting pressure on people to do something that curtails basic human autonomy: “It’s an ethical horror show that will do tremendous damage to our society.”

“Good ethics should be grounded in good science,” Bowman continues, pointing out that Quebecers who get a first dose today won’t be fully vaccinated for six to nine months, based on the timing intervals for getting three doses. By then, the dangers of Omicron will likely have passed.

Schafer notes that many of those who haven’t got immunized are likely members of marginalized communities, who have historical reasons to distrust the health-care system. “I think that making it an offence punishable by a special tax or fine, or however you dress it up, will be counterproductive,” he says. “Many will see it as unfair.”

Both Schafer and Bowman are alarmed by any consideration that those who are unvaccinated shouldn’t receive the same medical care as those who are. “We distribute health care according to need, and refuse to turn doctors and hospitals into moral judges,” says Schafer. What’s next, the experts ask, when it comes to making such decisions: “Did you have a glass of wine with dinner last night? Do you really need that 10 extra pounds?” asks Bowman. “There is no bottom to this.

“Us-and-them thinking brings out the worst of humankind. It’s not something you want to see.”