A tough environmentalist who spent years roughing it in India, she decided to take a resort holiday to unwind 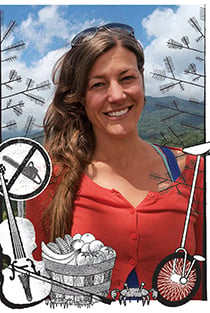 Rebecca Mary Tarbotton was born in Vancouver on July 30, 1973, to Mike, an engineer, and Mary, a homemaker. Becky, the eldest of three, had an adventurous streak and loved to perform. By age 9, she had mastered the fiddle and the unicycle. At 10, she met Emma Mason, who quickly became her best friend. Soon Becky was pestering Emma’s father to buy the house next door so the two girls could play together more often. “It was a rundown old house. I don’t think my father had any interest in it, but when Becky asked him, he thought, ‘Well, how can I resist?’ ” Within months, the Masons had moved in.

Becky and Emma started high school in a highly competitive, enriched program at the Prince of Wales Mini School on Vancouver’s west side. Becky performed in the school’s musical every year, most memorably as Grease’s Betty Rizzo, the leader of the “Pink Ladies,” the girls who “rule the school.”

At 13, Becky went on a hiking trip with the Masons in Tweedsmuir Provincial Park, in B.C.’s Bella Coola Valley. As they flew out, Becky, peering from the window, was horrified to see massive swaths of old-growth forest that had been clear-cut. The stark remains left an indelible mark on her. From then on, the environment was her driving passion. Once, when she was 16 and driving to a beach on B.C.’s southern coast, Becky noticed a group of boys throwing crabs onto the two-lane highway to watch them get run over by passing cars. Incensed, Becky, who by then stood six feet tall and favoured big, imposing hiking boots, pulled over, waved her arms to stop oncoming traffic and stormed across the road to give the boys a piece of her mind. They quickly fled.

After high school, Becky went to McGill University, where she studied geography and, in 1993, took part in her first environmental protests over logging in Clayoquot Sound, B.C. She returned to Vancouver in 1995 to begin a master’s degree in community planning at the University of British Columbia and started working for the International Society for Ecology and Culture (ISEC), a British environmental non-profit.

Becky spent the next eight summers in Ladakh, India, a sparsely populated, mountainous region in the northern state of Jammu and Kashmir, where she helped develop an advocacy group for female farmers. During the winter, she worked at the organization’s office in Devon, in southwest Britain, promoting alternative farming methods and the local food movement. In her spare time she liked drinking tea, reading books in her attic apartment and taking long walks in the countryside with Katy Mamon, a close friend.

In 2002, she moved to Berkeley, Calif., with the ISEC, eventually settling in Oakland. In 2007, she took a senior role with the San Francisco-based Rainforest Action Network and, in 2010, became its first female executive director. Soon Becky was leading a well-publicized campaign against Disney, the world’s largest children’s book publisher. It had been using paper from Indonesian rainforests and the group’s pamphlets showed Mickey and Minnie wielding chainsaws. Disney quickly gave in, promising to use sustainably sourced paper.

Becky, though devoted to environmental causes, always found time for her friends and family. She’d often phone her mom from the ferry on her daily commute home from San Francisco to Oakland. In 2011, on a ski trip to a friend’s cabin in Lake Tahoe, Nev., she met Mateo Williford, a solar-power technologist. Mateo, who noticed she was “very much a goofball” like him, was immediately attracted, and the two were soon dating.

In April 2012, Becky’s father, Mike, passed away from cancer, a devastating loss to Becky and her family. Two months later, Becky and Mateo were married in Katy’s backyard, amid an organic garden and a pond, surrounded by friends and family.

Becky’s work kept her busy, but last December, she and Mateo decided to finally take a proper vacation. For a hardened environmentalist used to spending her spare time hiking the mountains near Ladakh, the tourist mecca of Puerto Vallarta, Mexico, was an odd choice, but she decided to join a group of friends at the resort. On Boxing Day, the group took a long swim in the open ocean, swimming a half hour from shore. They hit rough waves and Becky inhaled some water. She made it back to the beach, but died of asphyxiation on shore. She was 39.