The return of the riot grrrl 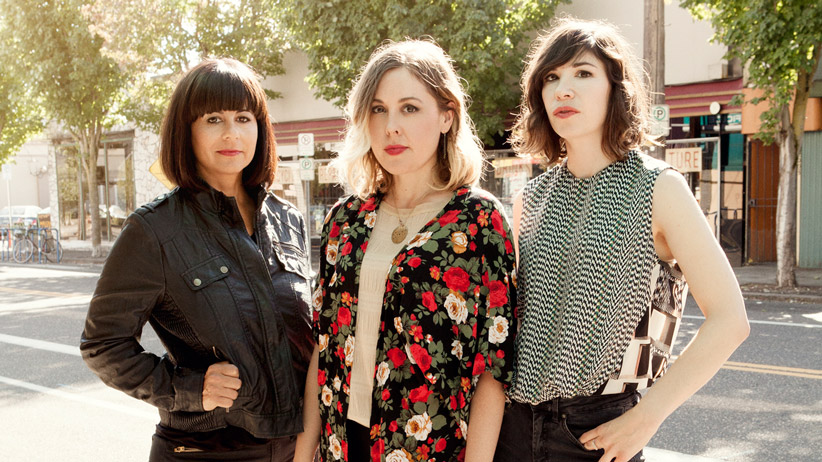 The headlines of 2014 were rough: rape culture, Rehtaeh Parsons, Jian Ghomeshi, Bill Cosby, Boko Haram. What, if anything, could be construed as a musical response? The sometimes terrifying and always powerful Tanya Tagaq, perhaps, who performed in front of a scrolling list of missing and murdered Aboriginal women just before she won the Polaris Music Prize for her 2014 album Animism. Or that the word “feminism” appeared ever-so-briefly in bright flashing lights behind Beyoncé at the 2014 MTV Video Awards: a mere 30 seconds in an 18-minute performance (30 seconds, mind you, that launched 1,000 think pieces).

Now we have No Cities to Love, a new album by the reunited Sleater-Kinney, a band born 20 years ago in the ashes of the DIY riot grrrl culture of youthful, fiery feminism—a movement sprung from equally harrowing headlines about the Montreal massacre, Take Back the Night marches and Susan Faludi’s book documenting the backlash against feminist gains. In Sleater-Kinney’s early years, their mere existence was essential: Female instrumentalists in pop or rock were rare, “girl power” was co-opted by the Spice Girls, and Woodstock ’99 ended in not just riots but rapes observed by hundreds. Kurt Cobain of Nirvana, who became the first rock superstar to explicitly champion feminist issues, committed suicide in 1994. Eminem was marketed as an aggrieved jokester. Sarah McLachlan’s Lilith Fair was as successful as it was derided. (Even today, the second Google hit for “Lilith Fair” is “Top 5 reasons to keep your girlfriend away from Lilith Fair.”)

Related: A Q&A with Kim Gordon

Most riot grrrls refused to talk with media who wouldn’t understand why young women might want to address sexual abuse in song, or reclaim the word “slut.” Sleater-Kinney, on the other hand, wanted as big a platform as possible to spread their word and reclaim rock mythology; one early song was titled I Wanna Be Your Joey Ramone.

After a 10-year recording hiatus (during which guitarist Carrie Brownstein became the star of TV’s Portlandia), the first single and title track from No Cities to Love arrived in January via YouTube—with Sarah Silverman, Ellen Page, Andy Samberg, Nashville’s Connie Britton and others lip-synching to the song. A knockout performance on the Late Show followed.

This comeback isn’t just about nostalgia: No Cities to Love is not a retread of past glories by fortysomethings flirting with redundancy. Nor is it a mellowing. It finds all three women on fire, pushing each other musically and making a ferocious rock record full of raw energy that shames all peers. They’ve never sounded better.

Their return coincides with a memoir by Sonic Youth’s Kim Gordon, the aptly titled Girl in a Band, in which she talks about being one of the only women on stage during the ’80s and early ’90s, her admiration for riot grrrl, realizing that “if you wore sexier clothes, you could sell dissonant music more easily,” and the challenges of breastfeeding while shooting a video. Gordon also produced the debut album by Courtney Love’s band, Hole (1991’s Pretty on the Inside). Love, a pariah among riot grrrls for her careerism and character, has largely been trivialized in the last 20 years, but a fascinating new book-length essay by Australian journalist Anwen Crawford about Hole’s 1994 album Live Through This gives the music its proper due. The book is for the 331/3 series of books about classic albums—only 13 out of the 106 titles in the series are about albums made by women.

Love sang about about sexual assault, body image and the taboo of the bad mother, as well as “credit in the straight world”—something the biggest female stars still lack. Beyoncé and Taylor Swift were 2014’s biggest pop icons, but the (false) assumption is still that they’re avatars with a team of Svengalis behind them. Even Björk argues she never gets enough credit for her production skills; Neko Case and Grimes have similar beefs. With Sleater-Kinney, however, there can be no question about their mastery—nor about how vital they sound in 2015. Or, as Kim Gordon sang on Sonic Youth’s final album, 2009’s The Eternal, “What’s it like to be a girl in a band? / I don’t quite understand/ That’s so quaint to hear.”