Saving the house that Maclean's built

A coalition of activists, politicians and lawyers rescued the historic Toronto home 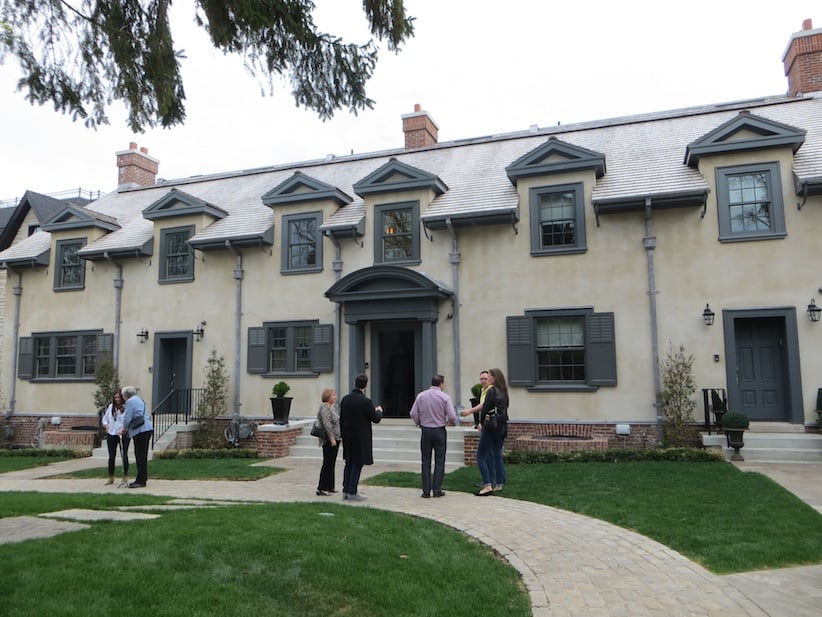 Good news is so hard to come by for many heritage buildings in Canada that everyone throws a party when one is saved from demolition. On Monday, it was a house that is close to the heart of everyone  at Maclean’s magazine. In 1911, the same year Lt.-Col. John Maclean changed the name of his six-year-old magazine originally christened The Business Magazine to Maclean’s, he moved his family into new digs at 7 Austin Terrace, near the fantasy castle, Casa Loma, in Toronto. Designed by architect John Lyle as the gatehouse for a much larger estate that was never built, it was John Maclean’s home until he died in 1950.

Its design, architect and owner made it an important house. As Maclean’s wrote in 2009: “John Bayne Maclean was a successful reporter and editor of the Toronto Daily Mail before he created his first magazine, the Canadian Grocer, in 1887. That kicked off a publishing career that eventually led to the founding of Maclean’s in 1905, as well as the Financial Post, Chatelaine and Mayfair. The house on Austin Terrace was built in 1910 by John Lyle, the Canadian architect behind Union Station and the Royal Alexandra Theatre. Much of Lyle’s work has been torn down, and the Maclean House is one of only a handful of Lyle buildings still standing in Toronto. Maclean died inside the home in 1950, at the age of 87.”

It was also beautiful in its own right. Heritage Toronto notes: “As an example of the Georgian Revival style, the residence features multi-pane sash windows, wall dormers, and a portico with curved pediment. The asymmetrical placement of the main entrance is unusual in this style, but Construction magazine referred to the variation as ‘particularly true of suburban or country residences, though in the former it is most pronounced.’ ”

After his death, however, the house went into decline. It was sold and broken into apartments, yet many of its interiors, including a ballroom, remained relatively intact as its historic importance was slowly forgotten. Unprotected by the Ontario Heritage Act, it was threatened with total demolition in 2009 by a developer who had purchased the site the previous year. As Maclean’s wrote:

The neighbours are furious, but their protests can barely be heard over the sound of contractors shattering glass and pummelling concrete at 7 Austin Terrace, the former home of Lt.-Col. J.B. Maclean, the founder of Maclean’s magazine. By the time they’re done, gone will be some of the century-old Toronto home’s most distinctive architectural features—windows, wood frames, columns, and the portico are already mostly destroyed.

Robert Levy, the president of the local housing association in Casa Loma, the northwest Toronto neighbourhood where Maclean House is located, stopped by the home earlier this week. The workers, he says, “were trying do as much damage as they possibly could. This basically had every characteristic of vandals going to town.” According to Levy and members of the housing association, John Todd, the local developer who purchased Maclean House in 2008, is scrambling to prevent it from being designated as a historical site by the city. Should it be recognized as such, Todd’s plans to demolish the $2.3-million residence and replace it with a new housing development would grind to a halt.

The community, led by Levy, galvanized a grand coalition of activists, local and provincial politicians and even Bay Street lawyers from McCarthy Tetrault (who worked pro bono) to fight for the forgotten house. The pressure worked. In December 2009, the province issued a stop-work order, only the second time in Ontario’s history, leaving enough time for the city to step in.

Then, in 2011 a new developer, Renaissance Fine Homes, bought the property and with heritage architects set about replacing all the lost architectural elements on the main north facade. Now the work is done. Though they couldn’t save the interiors—”destroyed” is the word most often bandied about yesterday—they were able to rescue and restore small elements including bronze andirons and even a scale built into the floor of John Maclean’s bathroom. Divided into new purpose-built houses, the front exterior looks much like it would have during Maclean’s day. One of the architects noted that they had to recreate the home’s original blueprints before figuring out how to recreate all the lost features. No detail was too small, be it the dormers and the portico or even the lead-covered copper eavestroughing. 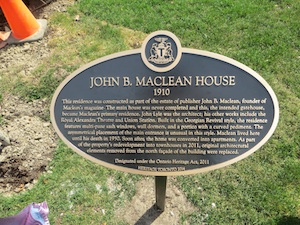 And so on Monday a crowd of around 50 people, many of whom had invested countless hours into saving John Maclean’s house, stood under the mature trees as its heritage plaque was officially unveiled.

Then, this being Toronto, they walked up the steps of the main portico for a peak inside one of the new homes for sale behind the old facade. For many, the victory was bittersweet. One person muttered, “Surely we can save more than a facade next time.” And as Toronto City Councillor Joe Mihevc said in 2009, “We have so little heritage left. Where does it stop? A city without heritage is a city without a soul.”