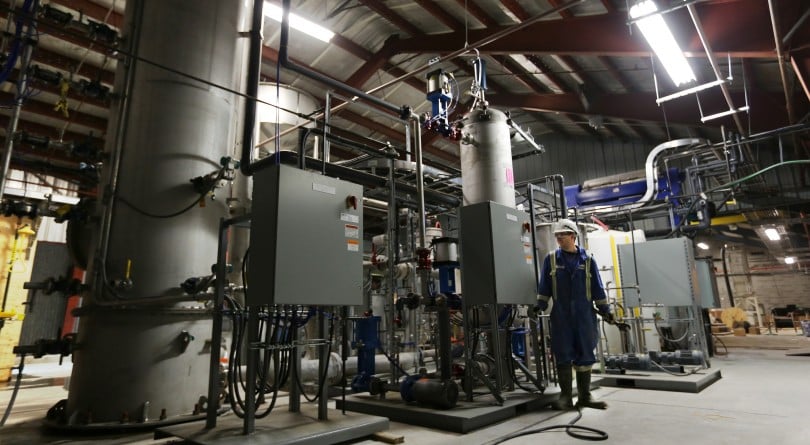 At the end of a dusty gravel road in Squamish, B.C., a facility is making gasoline from destructive carbon dioxide emissions captured from thin air. Carbon Engineering applies equipment and chemistry common in other industries to remove CO₂ from the air and, through a series of chemical processes, combine it with hydrogen to produce synthetic fuels. It claims that those fuels, which are compatible with vehicles or planes, are on the way to being entirely carbon neutral. While scientiﬁc observers quibble over the word “entirely,” they generally agree the process works.

Now, results of a recent study that pegs production costs at a level lower than expected have excited academics who monitor technological solutions to global warming. “It’s a major step forward,” says Philip Jessop, a Queen’s University chemistry professor and technical director of Green Centre Canada, which commercializes green scientiﬁc discoveries. “But like every fantastic step forward, you’ve got to have the ‘what’s-next.’ ”

Questions remain over whether the facility can be replicated on a large scale without losing control of costs. The process requires considerable energy to operate, which raises efﬁciency issues. Steve Oldham, Carbon Engineering’s ebullient CEO, says facilities will be powered by renewable energy sources—the test facility in B.C. runs on hydro. Jessop, however, notes that even clean energy sources like solar and wind are not entirely carbon neutral.

If successful, though, Carbon Engineering offers the utopian-sounding prospect of a climate-change solution that does not involve eliminating our reliance on fuel—a shift, to say the least, from conventional thinking on how to slow global warming. Carbon-neutral fuels would allow everyone to ditch the guilt associated with, say, booking an overseas flight. Battery-powered airplanes don’t exist—at least not yet, Oldham points out: “If you can eliminate your carbon footprint, you don’t have to change your behaviour.” Moreover, if the company’s facilities were built on a massive scale and the carbon captured were buried instead of used to make fuel, the process could do better than break even. That would reduce the amount of CO₂ in the atmosphere, says Oldham, glancing up at smoky skies caused by dozens of forest ﬁres, which on this day are choking B.C. “The challenge is that the planet is not ready to spend the money to do that,” he says.

Not everyone is giddy about Carbon Engineering’s plans. Carbon-reduction purists, who for years have tried to use moral suasion to convince countries and individuals to reduce their carbon footprints, worry an advancement in fuel production could raise false hopes and cause a backslide. “On a small scale, it’s a technology that could help at the margins,” says Richard Heinberg, senior fellow at the Post Carbon Institute in California. “But it’s not a technology that’s scalable—it’s so energy-intensive.” To operate on a large scale, the air-to-fuel process requires vast supplies of clean energy, solar or wind. As society decreases its reliance on fossil fuels, there will be competing demands for every joule. Still, Heinberg says he admires the efforts of company founder David Keith, a former University of Calgary physics professor who is now at Harvard University: “They’re good people and they’re doing good work.”

Keith founded Carbon Engineering in 2009. The company is privately owned, and its major investors are Microsoft founder Bill Gates, Alberta oil ﬁnancier Murray Edwards and Michael Hutchison, a Whistler-area real estate developer. Oldham came to the company from the aerospace industry. He was poached from MacDonald, Dettwiler and Associates (MDA) by his former boss, Dan Friedmann, who was once CEO of MDA and now chairs Carbon Engineering’s board.

Buzz over the company’s progress heightened this summer with the publication of a recent study in Joule, a new journal from the publishers of the respected life-sciences periodical Cell. It states that Carbon Engineering can remove carbon from the air for about US$100 per metric tonne, far less than past estimates of $600 per tonne made by an earlier American Physical Society study. Considering projected price drops in renewable energy, Carbon Engineering believes it can produce fuel for US$1 per litre, about the same price as renewable diesel, the company states.

Jessop says the economics outlined in the paper are exciting: “It’s not going to be free, but it’s not crazy expensive.” He’s now eagerly awaiting the results of the company’s life-cycle assessment, which measures the environmental damage of a project from construction through its entire operation. Oldham is conﬁdent the numbers will tip in Carbon Engineering’s favour; the company is seeking partners to build a commercial facility. He says it’s naive to think that people will end their dependency on fossil fuels overnight. But by creating carbon-neutral fuel, society can forgo pumping more oil and gas out of the ground. “If every car in the world used our fuel, CO₂ emissions would drop by 20 per cent.” Oldham doesn’t claim air-to-fuel technology is a complete global warming ﬁx; he says CO₂ reduction measures, including biofuels and electric vehicles, are key to any solution.

Erle Ellis, a geography and environmental systems professor at the University of Maryland at Baltimore County who studies the environmental impact of humans on Earth, would love Carbon Engineering to produce a carbon-neutral jet fuel. Although he understands the environmental harm associated with flying, he still boards a plane as many as 15 times a year.

However, Ellis sides with those who believe the ultimate climate-change ﬁx will come not from science but from human behaviour. “We do need to be actively developing new technologies like these, but that’s not going to be the end solution.” Societies must ﬁrst grow sufﬁciently aware of the environmental consequences of climate change and then co-operate on mitigation steps, he says. “Physics is easy. Social sciences are much harder.”