The mutilated bodies suggested psychopaths as the perpetrators, but a new branch of forensics pointed elsewhere 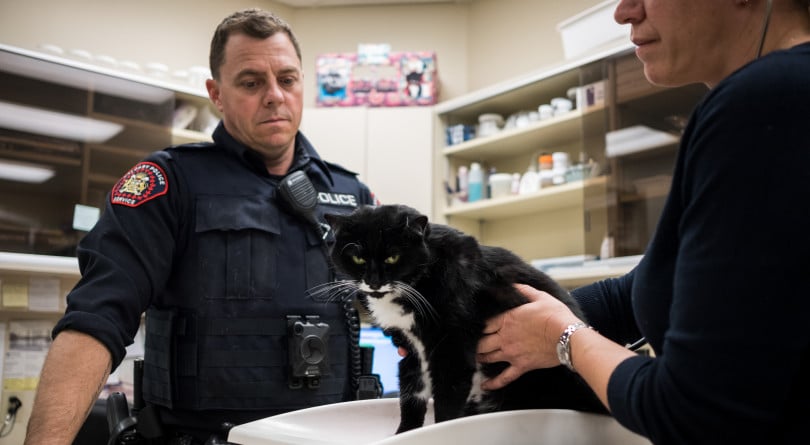 Forensic veterinarian Margaret Doyle (right) works with Cons. Dennis Smithson as part of a unit that investigates the abuse of animals (Photograph by Jeff McIntosh)

The mystery started with dead, mutilated cats left on front porches and lawns or in schoolyards in Edmonton and nearby St. Albert. Some of the bodies trailed intestines, as if they had been posed. Others had been severed in two and were missing one half or the other. The corpses had scalpel-like cuts.

At first, it was a cluster of 34 dead cats in 2007. But in 2016, the total for the two Alberta cities reached 53. Most showed up in the weeks surrounding the start of the school year.

Pet-lovers were appalled. Was a psychopath slowly stalking Alberta’s beloved felines? Was a cat-killing cult on the loose?

The case also raised alarm bells with a unique group of veterinarians and police officers. They are part of an emerging specialty that is a particularly troubling sign of the times: forensic veterinarian science. It’s like pet CSI—crime scene investigation. And Alberta is a trendsetter.

The vets assess injuries to animals the way a forensic pathologist does with humans, right down to blood spatter, genetic matching, angle of blow and degree of force. Exactly how were the injuries to the animals inflicted? How much pain did they cause? If the animal survived, what are the long-term effects?

Apart from concern for criminal acts against animals, the issue is that when someone intentionally injures pets, that person may also be harming humans. “There is a very clear link between animal abuse and child abuse, elder abuse and domestic abuse,” says Nick Nation, a veterinary pathologist in Edmonton. “If [authorities] find one of these, there’s usually another crime being committed.”

In the case of the dismembered cats, police and animal protection staff had set up a task force but failed to find a culprit. So, several months ago, Nation decided to get to the bottom of the enigma. He took a close look at all 53 cadavers.

Right away, his examination revealed that some of the cats had fallen prey to coyotes. Edmonton and St. Albert, which is to the northwest of the provincial capital, are set on an extensive, undeveloped, wooded river valley. Together, the cities are home to perhaps 1,000 coyotes.

Some of the dead cats’ claws were cracked, and some cracks contained tufts of light grey fur, similar to the undercoat of a coyote. Some cats showed signs of puncture wounds in the neck that matched canine teeth. Others seemed to have been killed in motor vehicle accidents and then scavenged by coyotes.

RELATED: Canada can still save these animals—but the odds are long

The finding reminded Nation of the notorious Croydon cat killer in England. Hundreds of cats in the south of London and nearby counties were found without heads or tails, some seeming to have been lopped off with knives. Horrified citizens were dubbing it the work of a Jack the Ripper of cats. Scotland Yard investigated for three years before determining last year that foxes were to blame.

But the coyote explanation didn’t seem to fit all the severed bodies among Nation’s cats. All but one half-cat was missing the matching half. That’s when he presented his evidence to Colleen Cassady St. Clair, an animal behaviourist and conservation scientist at the University of Alberta who is an expert in coyote behaviour. Ten years ago, she set up the Edmonton urban coyote project which, among other things, tracks citizen sightings of the predators.

Could coyotes be responsible for the half-cat corpses, too?

St. Clair believed so. Coyotes could easily fight over a cat—or even play with it as a pair—tearing it neatly in two. Even a good shake could cause some of the dismemberment Nation saw in the cat cadavers. “I think some coyotes absolutely target cats and they learn to do it and they go looking for them,” St. Clair says.

Nation and St. Clair’s conclusion, published in May in the journal Veterinary Pathology, was that coyotes either killed or scavenged most of the 53 cats, if not all of them. “We considered whether cults and psychopaths—or that type of person—were involved in this and we concluded that they’re not,” Nation says. The work serves as a guideline to other vets who are called on to assess mutilated cats.

Forensic vets breathed a sigh of relief that humans weren’t involved. “The reason that case was important to investigate was because the cats looked like they had been mutilated,” says Margaret Doyle, a forensic veterinarian at the VCA Canada Riverbend Animal Hospital in Calgary. “A lot of people will practise, typically on cats, things they later intend to do to people.”

She pointed to Luka Magnotta, who was under investigation for killing kittens and posting the videos online before he killed and dismembered Chinese engineering student Jun Lin in Montreal in 2012. Magnotta was found guilty of Lin’s death in 2014. 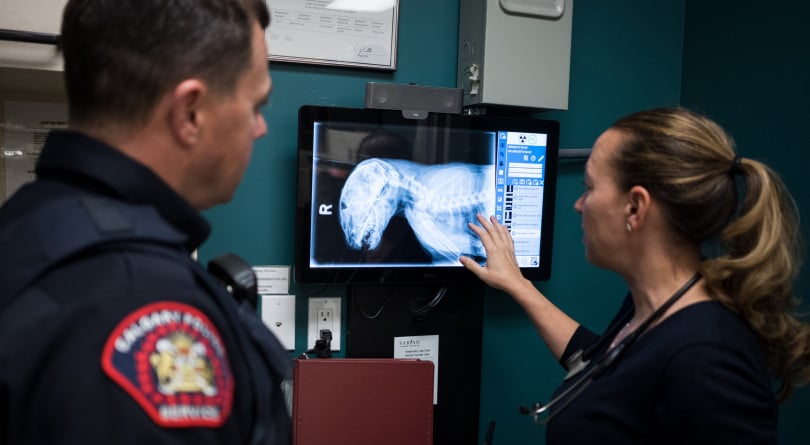 The field of vet forensics is still small in Canada. Doyle graduated with a Master’s in the specialty in 2015 from the University of Florida, the only school in North America to offer it. In all, only a handful of forensic vets are practising in Canada, Nation says.

And in Calgary, Doyle is working with the police service in an informal unit dedicated to animal abuse—also a rarity in Canada. The team includes not just Doyle but also members of the Calgary Humane Society and four Crown prosecutors, notes Const. Dennis Smithson, who is one of the team’s members.

There’s growing evidence of just how powerful such a unit’s work can be. In 2014, the FBI started compiling a database of people who intentionally harm animals, on the grounds that they may be contemplating other highly violent acts, says Smithson. He now trains front line Calgary police officers to look for links between animal abuse and other crimes.

“Historically, some of these things have been dismissed and passed over,” he observes, adding that in his 12 years of policing before the animal abuse work, he had not recognized how prevalent the link is between animal and human abuse. “It’s an emerging trend for us.”

READ MORE: Should I give pot to my pets?

Today, Smithson, Doyle and their team are cataloguing the complex ways power and control within an abusive relationship can extend to pets. They recently got a two-year federal conviction for a man who took a blowtorch to a cat and then killed a kitten by smashing it into a wall in order to intimidate his female partner. The man said all the injuries were accidental. Doyle could prove—in detail—that they weren’t.

Not only did the team members protect the surviving adult cat from further injuries, but they were also able to separate the woman from a partner who terrorized her, Smithson points out. “It’s just another tool we have to protect victims.”

One reason this new discipline of vet forensics is taking hold stems from another modern trend: the appetite for television shows that parse every gory detail of crime scenes. “It’s only just recently that we have the demand from the courts to do this, because everybody’s seen an episode of CSI,” Doyle says. “If you have a jury and a judge, they just have this expectation now. And if you don’t present this evidence, there’s almost this idea that you didn’t investigate it as well as you could have.”

This article appears in print in the October 2019 issue of Maclean’s magazine with the headline, “The dead cat riddle.” Subscribe to the monthly print magazine here.