After months of fruitless attempts at reviving her—and she was 'her' to those who knew her—scientists gave up. But she helped pave the way for human visitors to Mars. 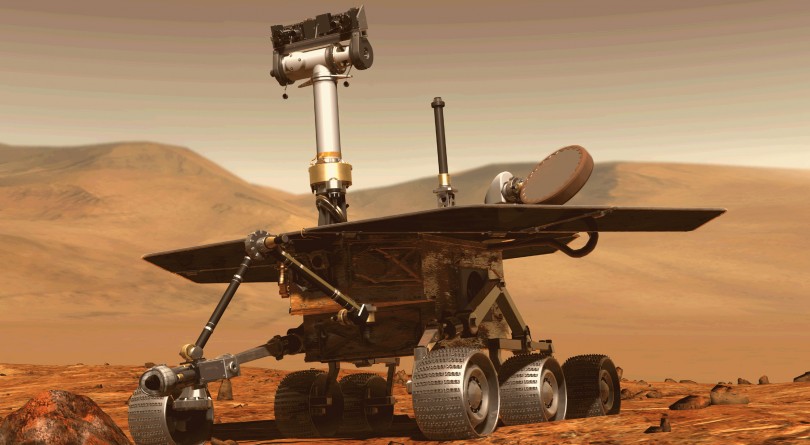 Opportunity landed on Mars in 2004 and outlived her 90-day mission by about 15 years. She was a good rover, and she will be missed. (NASA)

Tanya Harrison was an undergraduate student when the Mars Exploration Rover (MER) named Opportunity landed on the red planet in 2004. She was studying astronomy and physics at the University of Washington at the time, and she hoped that in her future career, she might get to work on a rover like Opportunity.

The rover and her twin, Spirit, were designed for 90-day missions, collecting images and performing geological analysis on the fourth planet from the sun, but instead, Opportunity trundled along for an astonishing 15 years (Spirit’s mission ended in 2010).

That was enough time for Harrison to complete a Ph.D. in geology with a specialization in planetary science and exploration at the University of Western Ontario and eventually work on operations for the rover she had assumed would be long retired by the time she arrived. “It’s completely surreal,” Harrison says. “Even though I’ve been doing this for a while now, it never loses the novelty factor.”

Harrison spent three years working on Opportunity, and she was one of the many tearful scientists who bade her farewell on Feb. 12, when, after months of fruitless attempts to regain contact, the mission was declared dead. By the time she—and Opportunity was “she” to those who worked with her—last communicated with Earth in June, the rover had broken the record for extraterrestrial travel by traversing more than a marathon’s worth of Mars (45.16 km).

Harrison is director of research for Arizona State University’s Space Technology and Science Initiative, and a science team collaborator on the MER project (its headquarters are in NASA’s Jet Propulsion Laboratory, or JPL, in Pasadena, Calif., but the rover’s components are operated from various remote sites). Harrison worked on Opportunity’s “pancam,” or panoramic camera, as the payload downlink lead, which meant retrieving the images from the rover and assessing them from both a geological (are there interesting rocks over there we should look at?) and an engineering standpoint (is the camera working properly?). At times, she was the ﬁrst human being on Earth to see a particular view of Mars.

“There’s not really a way to describe how that feels,” she says. “You have this singular moment where you have this really intimate relationship with Mars, until you end up sharing that image with everybody else, and there’s something really powerful about that. It was very moving.” 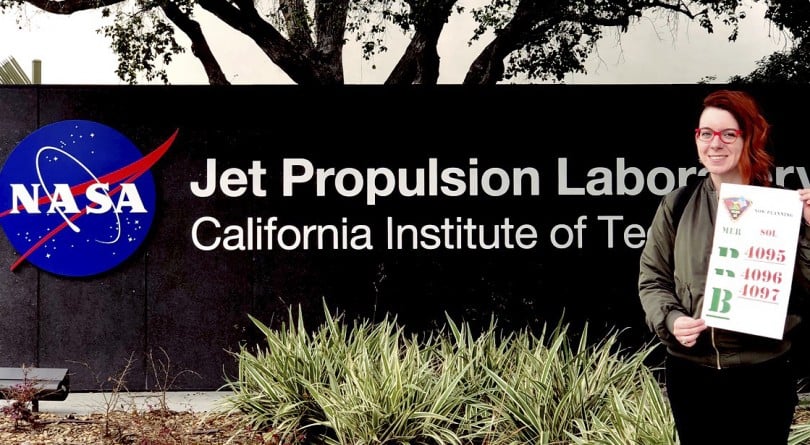 The team lost contact with Opportunity on June 10, 2018, in a massive dust storm. The technical details are complex, but over the ensuing months, they attempted to contact her in two ways: passively—which Harrison describes as akin to waiting for your teenager to wake up on their own and go to school—and actively, which is like knocking on the door and hollering, “Get out of bed!” They sent more than a thousand commands in all, to no avail.

Initially, they thought there was dust lingering in the air, blocking the sun from charging Opportunity’s solar panels, and the shaken snow globe would eventually settle down. But a few months later, when they got a good look at Opportunity in satellite images, they could see that her solar panels were coated with pinkish-red Martian dust. “Dust-clearing season” was expected to stretch from November 2018 to January 2019, which in past years brought tornado-like winds that cleaned off the panels, but even after that, there was nothing. “We just didn’t have any chance of getting her back,” Harrison says.

Once NASA made the call, it invited everyone who had worked on the mission to the JPL to witness the ﬁnal attempts at contacting Opportunity before declaring the mission dead. “I knew as soon as I saw that email that I wanted to be there,” says Harrison, who paid her own way to go.

Each day since they had lost contact with Opportunity, the team played a symbolic “wake-up song” in mission operations. On the day they knew could be their last with her, they played Billie Holiday’s “I’ll Be Seeing You”:

“I’ll find you in the morning sun,

And when the night is new,

I’ll be looking at the moon,

But I’ll be seeing you.”

The timing of sending the final commands depended on the relative positions of Mars and Earth, so it was evening on Feb. 12 when Harrison gathered in the glassed-in “darkroom” above mission operations with the rest of the overflow crowd in Pasadena. The team planned to send four final commands that evening. “When they announced that they were sending the last command, everything just went silent,” Harrison says.

The rover team had been together in one form or another for more than 15 years, as Opportunity’s journey on Mars stretched impossibly far past its expected lifespan. “I think for some people, you have this sense of, ‘Oh gosh, what do I do now?’ ”

But there was also mourning for Opportunity herself. The rover had camera “eyes” and an arm, so it was easy to anthropomorphize her, or to picture your human self experiencing the Martian landscape through her. She was humanity’s ambassador to Mars, our proxy on the planet we can’t yet set our feet on. “I get emotional about other missions—I want to see them be successful and it’s very sad when they end. But it’s a very different feeling compared to thinking about actually turning off the rover and cutting off contact there,” says Harrison. “It’s almost like putting your dog down.”

The last command went out to Opportunity at around 9:20 p.m. PST. It takes 13 minutes to get communications from Earth to Mars and back, so they waited. But of course they already knew. “Everybody kind of stood there in silence for a little while, and then definitely some people started crying,” Harrison says. In one corner, she and a friend wept in each other’s arms.

Harrison’s favourite images from Mars are the ones in which you can see Opportunity’s own tracks in the dust, because it’s a powerful reminder that humans are actively doing something on another planet. “The fact that we have the ability to launch something toward a moving target 200 million km away, land it where we want it to go, and we can drag it up to specific rocks on the other planet and do science on them,” she says. “It blows my mind. Even though I know from a science and engineering standpoint how it works, it’s still amazing.” 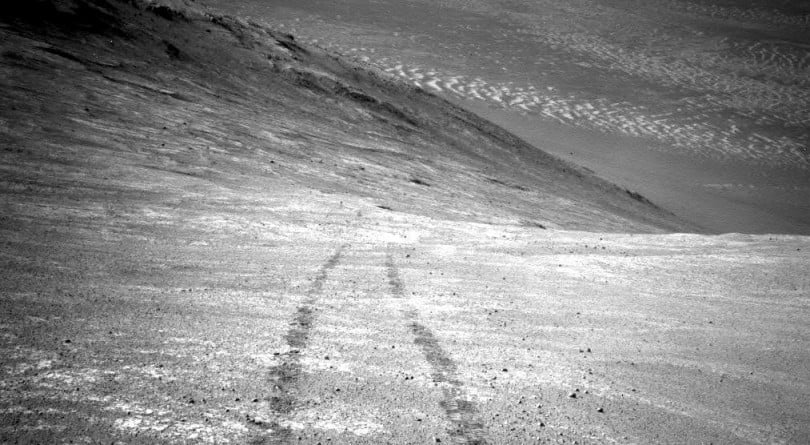 Opportunity imaged this dust devil and its own tracks with its Panchromatic Camera (Pancam) on March 31, 2016. (NASA/JPL-Caltech/Cornell/ASU)

The day after the mission ended, NASA informed the rest of the world. “It is because of trailblazing missions such as Opportunity that there will come a day when our brave astronauts walk on the surface of Mars,” NASA administrator Jim Bridenstine said in a statement. “And when that day arrives, some portion of that first footprint will be owned by the men and women of Opportunity, and a little rover that deﬁed the odds and did so much in the name of exploration.”

There has been some debate over whether Opportunity should ultimately be left on Mars or brought back to Earth for display in a museum. To Harrison, the answer is obvious. “Because of what she represents on Mars, that’s where she belongs,” she says. “That’s her home, and we should leave her there as a representation of everything she did for us.”

The spot where Opportunity finally came to rest is called Perseverance Valley.