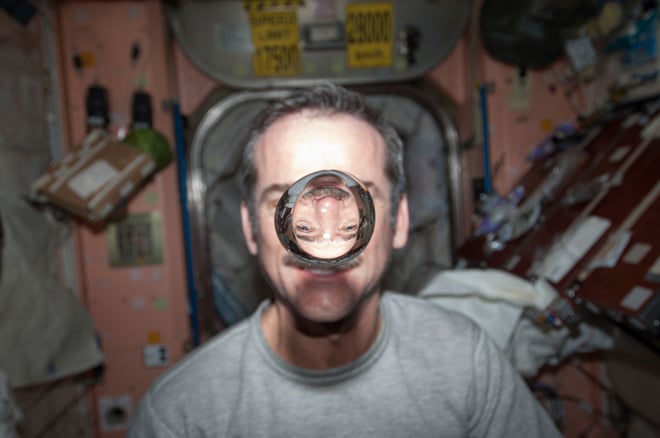 Canadian Space Agency astronaut Chris Hadfield, Expedition 34 flight engineer, watches a water bubble float freely between him and the camera, showing his image refracted, in the Unity node of the International Space Station in 2013. (REUTERS/NASA/Handout)

The guitar that lives on the International Space Station—a Canadian-built Larrivée parlour model—hardly ever goes out of tune. Up on the Station, “the temperature stays the same, the humidity stays the same,” says Chris Hadfield, who stopped by the Rogers building in downtown Toronto today with musician Emm Gryner. They came to play a few songs for gathered radio station staff, including So Easy, their collaboration on Gryner’s new record. (98.1 CHFI, 680News, and KiSS 92.5, like Maclean’s, are owned by Rogers.) Both born in Sarnia, Ont., Hadfield and Gryner have known each other a long time; Gryner, who used to perform with David Bowie, also played keyboards on Hadfield’s now-famous rendition of Bowie’s Space Oddity, which they performed again today.

Living on the Space Station, where nearly every minute of an astronaut’s time is strictly scheduled, Hadfield still somehow found the time to play guitar almost daily. “I played every song I knew up there,” he says. The now-retired astronaut can’t seem to stand still: just back from Australia, he’s preparing for a trip to Beijing for the annual meeting of the Association of Space Explorers. He’s teaching at the University of Waterloo. His new book, An Astronaut’s Guide to Life on Earth, is a bestseller—and is being developed into a TV sitcom in the United States. And he has another book coming out, mid-October, of photos from space. Hadfield’s fame still seems to catch him off-guard. It’s like a “perpetual family reunion,” he says, of how often he’s recognized. “Everybody’s a second cousin.”

Hadfield, who’s played in two astronaut bands (his official mission patch was shaped like a guitar pick), is still making music, including with Gryner. Today, guitar in hand, he seemed genuinely happy to be playing, although it must be much different from on the Space Station. There, he’d take his guitar into the “huge bulging window” of the Cupola, and look down at Earth, as he recalls. It was, he says, “like magic.”