Why everyone is excited about an exoplanet named Proxima b

Proxima b is the nearest exoplanet to Earth, and it lies within its star's habitable zone. That means it could—maybe—host life. 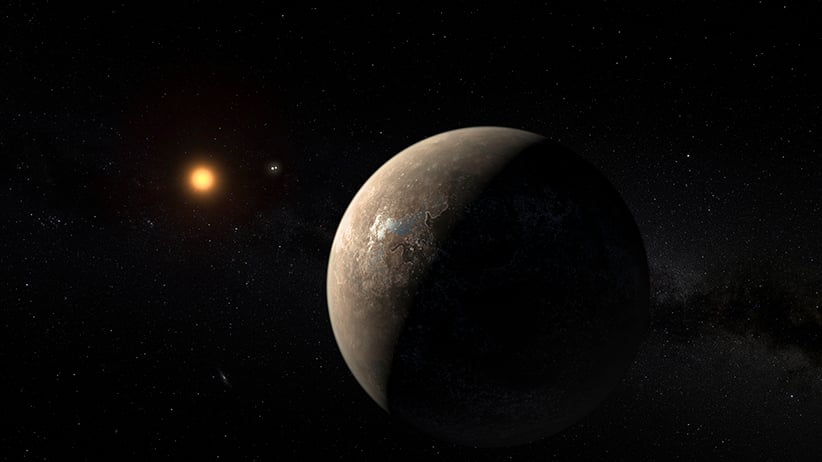 An artist’s impression of the planet Proxima b orbiting Proxima Centauri, the closest star to our solar system (ESO/M. Kornmesser/Reuters)

Scientists have discovered an Earth-like planet orbiting Proxima Centauri, the star closest to our sun. This rocky exoplanet, dubbed Proxima b, has the astronomical community pretty excited because, as the European Southern Observatory explains in its announcement, “it may be the closest possible abode for life outside the Solar System.”

At a mere four light years from Earth, Proxima b is our nearest exoplanet—a planet that orbits a star outside the solar system. That’s close enough to allow us to study it in detail, something scientists have not yet had the opportunity to do with a potentially habitable planet.

Proxima Centauri, Proxima b’s host star, is a red dwarf that is quite a bit smaller than our yellow dwarf sun. It’s found in the Centaurus constellation. Proxima b itself is 1.3 times more massive than Earth, and it takes 11.2 days to completely orbit its star. Scientists think only one side of the exoplanet is exposed to light from Proxima Centauri (similar to our view of the moon). 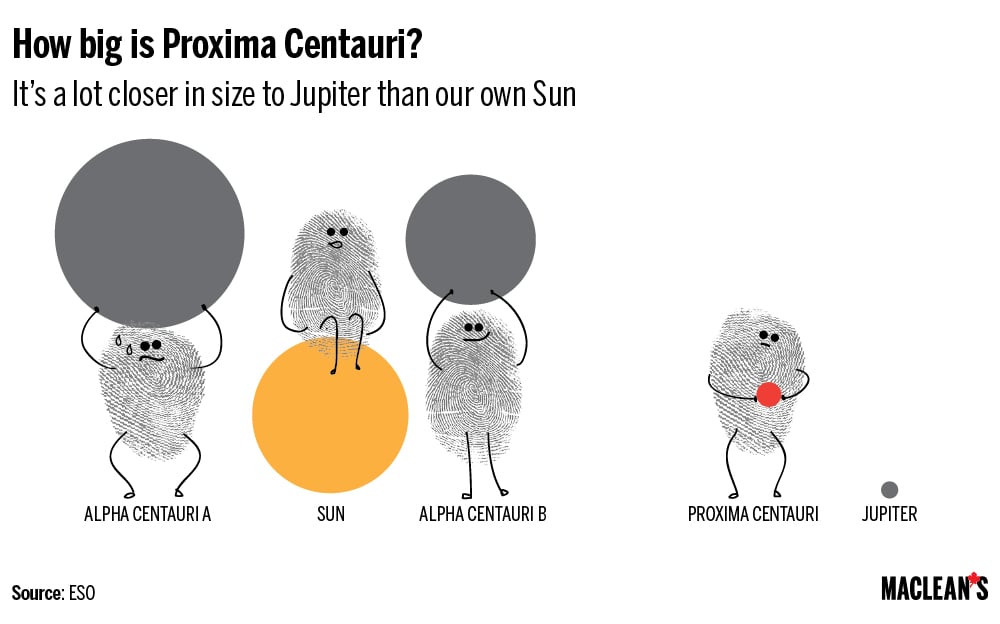 Proxima b orbits closer to its star than Mercury does to the sun; however, its host star is cooler than ours and so, as ESO explains, “Proxima b lies well within the habitable zone around the star and has an estimated surface temperature that would allow the presence of liquid water.”

Life, as we understand it, needs water. In order for an exoplanet to be considered potentially habitable, it needs to exist at a distance from its host star that allows for the formation of liquid water on its surface. If the exoplanet is too far from the star, temperatures may be too cold for liquid water; if its orbit is too close, temperatures will be too hot. The area in between, where the temperature is just right, is the habitable zone—or, as some call it, the “Goldilocks Zone.”

To help explain the concept, let’s look at the habitable zone around our own sun. This is where we find the Earth. (Good thing.) 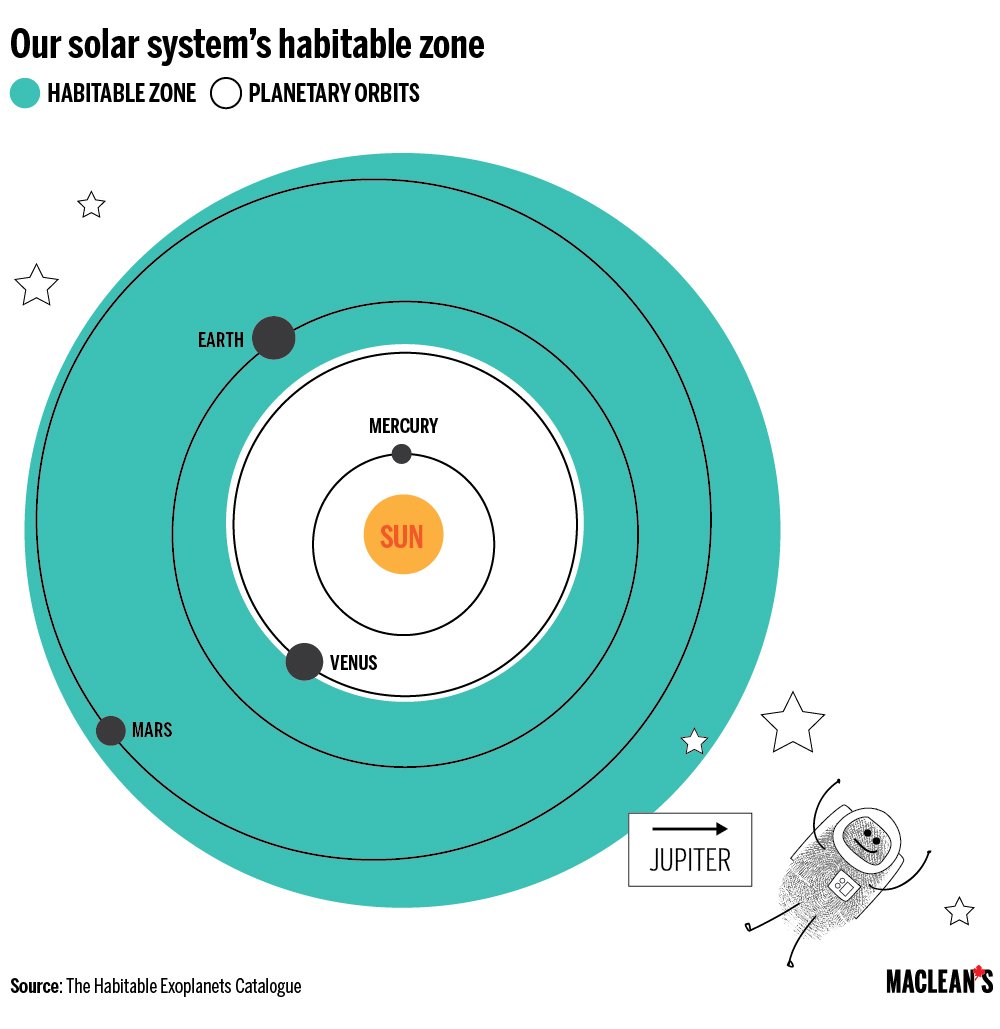 Very few planets lie within the sun’s habitable zone. In fact, only the Earth and Mars have temperatures that allow for the formation of liquid water.

Just because an exoplanet is in a star’s habitable zone, however, does not mean it can host life. It simply means that if the exoplanet featured a similar atmosphere and surface pressure as the Earth, the planet could sustain liquid water. Unfortunately, we know nothing about Proxima b’s atmosphere.

For an exoplanet to be potentially habitable, scientists consider more than just whether or not it can host water. The star around which the exoplanet orbits needs to be of a particular type—one that burns long enough to allow life a chance to evolve, and emits appropriate amounts of ultraviolet radiation.

Additionally, the exoplanet must have significant similarities to Earth. The Earth Similarity Index (ESI) is a way to measure this likeness, and it places objects on a scale of zero to one, where one is Earth itself. The closer to 1.0, the more similar the exoplanet is to our home. The measurement takes into account radius, density, escape velocity, and surface temperature.

No other planets in our solar system are Earth-like; however, in addition to being the nearest of the 44 potentially habitable exoplanets we’ve found, Proxima b also has the highest ESI. 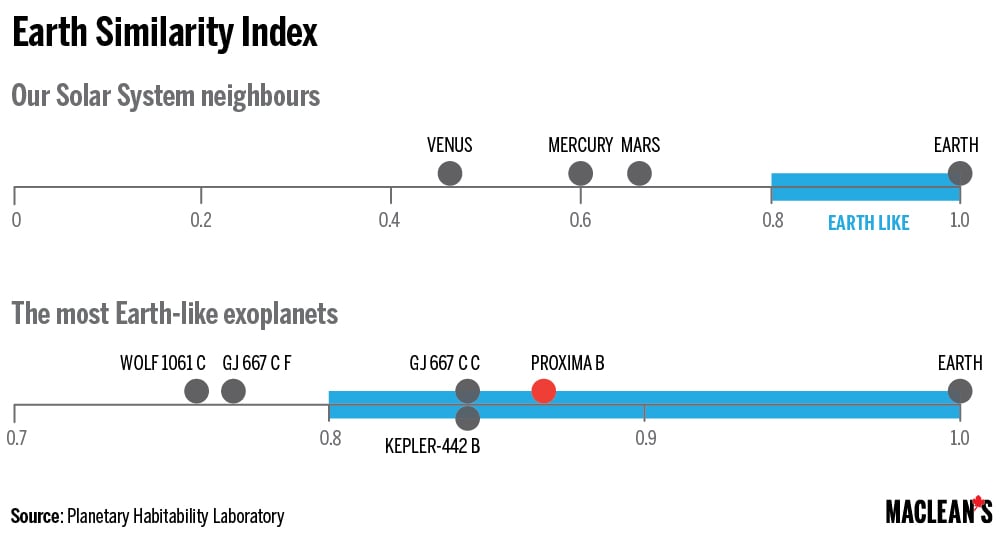 Proxima b has a high ESI and exists within its star’s habitable zone, but don’t go packing your bags just yet. At the speed of current rockets, it would take humans over 100,000 years to get to there.