Roberta Bondar's 'naked' truth, part of our series in conversation with Canadian astronauts 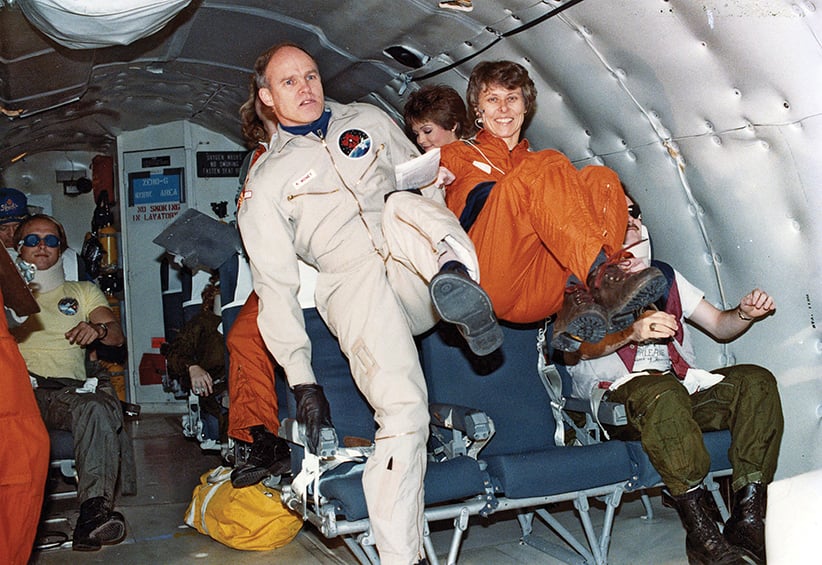 Canadian astronauts Ken Money and Roberta Bondar get a feel for zero-gravity during training on board NASA’s KC135 aircraft on Dec. 18, 1984. (STF/UPC/CP)

A: Without question, looking at the Earth from space, because it’s the one thing you can’t simulate. We all cerebrally know that the Earth is a planet, but, in the reality of the moment, you actually see that it is.

Q: What was the hardest part?

A: Using the bathroom when the toilet broke.

Q: What made you most nervous before you went up?

A: Certainly for me, it was the idea of being a pioneer. I was worried that, if anything happened, I wouldn’t be able to communicate anything to people I had left behind. It was after the Challenger accident. Nonetheless, you know you have to be focused. You can’t be thinking about nerves.

Q: What were your scientific goals?

A: My flight was a stepping stone to the [International] Space Station, so we had two 12-hour shifts and we did so many experiments, everything from life science to physical science to human physiology. I think the lessons we learned were logistics lessons. There were something like 40 experiments from 13 different countries. I was most interested in the human physiology stuff. I was the world’s first neurologist in space. It was a milestone for Canadians, to see a Canadian working in the international scientific world.

Q: What was it like to be the first Canadian woman in space?

A: I’m also the first right-handed Canadian in space, because Marc [Garneau] was left-handed. But I digress.

Q: Was that a challenge? You were the only woman on your mission.

A: The only concession the commander made was giving me my own sleep cabinet. When it came to the flight, I was a crew member like anybody else.

Q: What excites you most about the future of space exploration?

A: I think the design of reusable vehicles is exciting. I think, even though the Virgin Galactic

had a setback with the death of the pilot, it shows that human beings are trying to use new technologies and new ways of having computers serve us, to be able to have a different type of access to space. 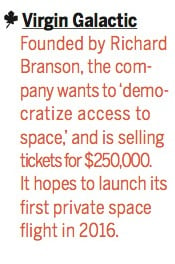 I’m also interested in the robotic systems with which we go to other planets, and we need that, because human beings can’t withstand all that radiation out in space.

Q: Would you ever take a one-way trip to space, like people buying tickets for Mars One? 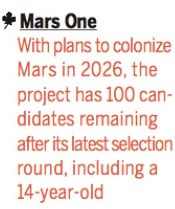 A: As a physician and a person who has been doing so much space research, I think it’s unethical, absolutely. Some of the mouse models that have been exposed to the background radiation of space have evidence of Alzheimer’s disease. There is so much we don’t know. People are so cavalier. People say, ‘Oh yes, we can conquer space.’ People just aren’t realists.

Q: What do you want your legacy in the Canadian space program to be?

A: “She explored the planet and shared it with others.”

Q: What about Canada’s legacy in space?

A: Canada needs individuals to whom educators can point, and of whom we can be proud, whether athletes or astronauts or anything else. I think the role each of us plays is not so much “Look at me,” but rather, “Look at our country.”

Q: What should future scientists and astronauts be learning?

A: I think there’s responsibility both at the federal and provincial levels for education in a grander sense—and that is to provide recognition financially to people who are educators, to help provide access to on-the-spot learning, so kids are not biased against science. Especially when people are younger, their curiosity needs never to be beaten down. It has to go someplace. And you can only do that if you have people who love the subject they’re teaching, and who provide the student with the ability to do it in the field. Look at the programs that have been cancelled for school trips. Kids need to explore the planet, whether it’s geology or earth science. Not everything can be learned on computers in a classroom.

A: Galaxy Quest, hands down. Tim Allen is in it. Boy, it’s hilarious. It’s all about how he’s in this space show on TV, and then the show was cancelled and they didn’t do anything but go around and sign autographs.

It’s a commentary on practically everything to do with space. It makes me think about this one time when Kraft paid me to sign autographs in a Metro store.

Q: You’ve given hundreds of interviews about your experience in space. Is there anything you don’t usually talk about?

A: There is one thing. I may have spoken about it once or twice in the 23 years since I went to space. Maybe you haven’t seen 2001: A Space Odyssey, but, at the end of that movie, there’s this embryo that’s floating in an amniotic sac. It’s symbolic of rebirth and new ideas. One time, when I was in the galley area, which is where the washroom was, I was completely naked and there was a window out there and I could see the Earth beyond the window. I curled up in the fetal position and floated, as an homage to that movie.

Q: How did space change you?

A: It allowed me to meet people I normally wouldn’t have. It’s allowed me to have a profile to try to make some change in how we look at the environment, and how we engage in education. It provided me with all kinds of platforms to grow and help other people grow with me. I think those are the lasting gifts. The actual space flight? Going to space was a moment that people think was my Mount Everest, but it’s not. I have so many Mount Everests. This just happens to be one of them. It has changed the way I approach things. I realize it’s not about me; it’s about what I did and about the person we had as a Canadian woman in space. I look at pictures of myself and say, ‘That’s the woman who did it.’