Say goodbye, Canada. The North Pole is moving to Russia. 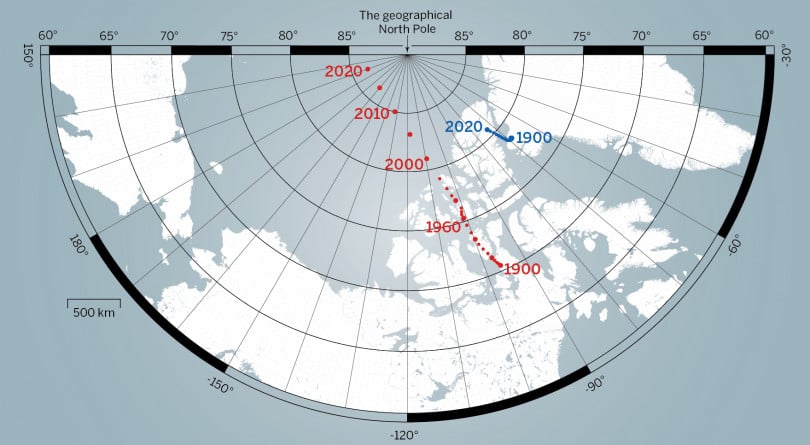 A stereographic projection shows the movement of the magnetic (red) and geomagnetic (blue) poles in the northern hemisphere since 1900 (Thébault et al. Earth, Planets and Space)

For the ﬁrst time since it was discovered on the North American mainland, the magnetic North Pole is heading into Siberian territory. Geophysicists who use satellite data to track the machinations of the Earth’s magnetic ﬁeld say the pole is moving extraordinarily fast, galloping across the Arctic Archipelago so swiftly that earlier this year, its speed forced scientists to recalculate magnetic models earlier than they had planned.

The magnetic North Pole is the one spot on the top of the planet where the Earth’s magnetic ﬁeld lines converge and drive straight into its core. The core, made of a solid inner part and a molten metallic outer part, continually creates the planet’s vast and changeable magnetic ﬁeld as it sheds heat stored there since the planet’s birth. Maritime and airplane navigation, defence systems and even smartphones depend on accurate magnetic readings.

The cavorting magnetic North Pole has made that tricky for decades. But despite its rapid movement, it has remained in Canadian territory. Until now. While geophysicists can’t say for sure when the pole will be in Russian territory, because it’s hard to pinpoint the geographic claims there, they say its Siberian trajectory is unstoppable.

That’s happening because of a tug-of-war between two unusually strong magnetic patches in the outer core, says Phil Livermore, director of the Institute of Geophysics and Tectonics at the University of Leeds. One patch is under Canada. The other is beneath Siberia. The magnetic North Pole has historically been in Canada because our country has won the molten push-pull contest. But now?

READ: How science is bringing psychedelic mushrooms out of the shadows

“Something’s changed, and now Siberia is winning,” Livermore says, explaining that the patch under Canada is being thinned out like a smear, elongated and weakened by a separate, ﬁerce jet of magnetism in the core.

For centuries, the magnetic North Pole has been a key geographic prize. Finding it was a central goal of the so-called magnetic crusade that obsessed scientists and navigators in the 18th and 19th centuries as they raced to understand the mysterious, invisible force that moves the compass.

Finally, on June 1, 1831, the Arctic sailor and explorer James Clark Ross set up camp in some abandoned Inuit ice huts on the Boothia Peninsula on the mainland of what is now Canada and pinpointed the magnetic North Pole for the ﬁrst time. Ross, who named the peninsula after Felix Booth, the wealthy British gin distiller who had ﬁnanced his expedition, claimed the ﬁnd for Britain and was knighted.

The magnetic North Pole remains laden with symbolism, says John Geiger, chief executive of the Royal Canadian Geographical Society and an Arctic scholar. Russia is prone to “chest-thumping” over any geographic prize, he says, and may do that over gaining this one.

Geiger says that among those who have been following the journey of magnetic north, there is a sense of inevitability that it has decamped to Russia.

“It’s not a comment on the performance of our federal government, although some may choose to interpret it that way,” Geiger jokes. “Nothing is forever in the world of magnetism.”

That impermanence has made the magnetic poles endlessly fascinating to scientists. The ﬁeld’s lines are like stretchy, ungovernable elastic bands that gyrate around the Earth, protecting us from solar storms and galactic radiation. That means the movement of the poles gives clues to what’s going on in the Earth’s innermost regions.

Sometimes the ﬁeld becomes so tortured that the magnetic poles switch places altogether; north becomes south and south becomes north. The last time that happened was 780,000 years ago. Geophysicists cannot say when that will happen again, or whether the weird inner turbulence causing magnetic north to move so fast is a sign that the switch is imminent. While it’s not quite as mysterious as it was during the magnetic crusade, the Earth’s magnetic ﬁeld remains inscrutable in many important ways.

Some Canadians will be oblivious to the history and signiﬁcance of the magnetic North Pole, Geiger says, while others will mourn its loss to Russia. And many others may conflate some of the four north poles that geographers have identiﬁed.

Geographers have episodically recalculated the site of the North Pole of inaccessibility as new islands are discovered. Modern-day British and Russian explorers have mounted expeditions to ﬁnd it in the moving sea ice.

Of the three north poles that are better known, though, Russia has dibs on two. Magnetic north is sprinting to Russia on its own. Russia has also claimed geographical north, as has Denmark.

“Right now, the geographical North Pole is in the high seas,” says Rob Huebert, a political scientist at the University of Calgary, adding that its ownership is politically unresolved.

Other poles aside, the magnetic North Pole remains knitted into the Canadian psyche and culture. It is embedded in a loose deﬁnition of the Arctic and the traditional Inuit homeland, says Andrew Chater, Fulbright visiting research chair in Arctic studies at the University of Washington in Seattle and a faculty member at Brescia University College in London, Ont.

“We associate the Arctic with the Canadian identity,” he says. “It’s become part of our national ethos.”

Many people also link the magnetic North Pole with Santa Claus, partly because of the confusion over magnetic and geographical north. And Santa is deﬁnitely Canadian.

In fact, Chater says, Canada’s immigration department has, tongue-in-cheek, named Saint Nick an honorary citizen and issued him a passport, a move aimed at cementing the importance to Canada of the pole and its most famous elf. Canada Post has long offered postal service for letters to Santa, complete with the sly postal code H0H0H0. Will Santa’s citizenship wobble along with magnetic north? And how does all of this affect Canada’s northern chops?

At the moment, the only North Pole that is indisputably Canadian is the geomagnetic one. After a stint in Greenland at the beginning of the 20th century, it is now located on Ellesmere Island, Livermore’s maps show. Unlike the magnetic North Pole, it is moving slowly. But if Canada were to lose the magnetic, geographical and geomagnetic north poles, that would be a psychic blow, Geiger says.

“We must do everything in our power to ensure that the geomagnetic North Pole remains Canadian,” he says. “Perhaps we should be planting our flag on it this summer.”

Livermore advises calm. While Siberia is capturing the magnetic North Pole at the moment, the Earth’s internal magnetic romps are so vigorous that Canada could one day take it back again.

The Canadian author Kathleen Winter has a different take on the matter. She wrote the novel Annabel and the literary non-ﬁction work Boundless, which traces Sir John Franklin’s path across the Northwest Passage.

“My feeling is that Earth’s forces might be indicating to us that it is time to stop our outmoded notions of borders, boundaries and ownership,” she wrote in an email. “Many globally signiﬁcant phenomena, from weather to animal distress to human migration, are sending us a clear message that we need to make a gigantic shift in our collective thinking, away from small-minded notions of sovereignty and protectionism to something larger and more intelligent.”

Perhaps the magnetic North Pole’s defection is a symbol in itself. It’s something we can’t change, tethered to operations deep within our planet. But it can focus attention on the change we are capable of doing something about: the rising concentration of carbon dioxide in the atmosphere that is destabilizing climate norms. Siberia, after all, also has claim to the pole of cold, the coldest spot in the northern hemisphere. But, like the rest of the Arctic, it is warming up fast, so who knows how long it can wear that crown?