The earth's rotation is slowing, and that points to a big year for earthquakes

The Earth started a period of slow rotation around 2013, and if the research is right, we’re about to experience a greater number of earthquakes over the next few years 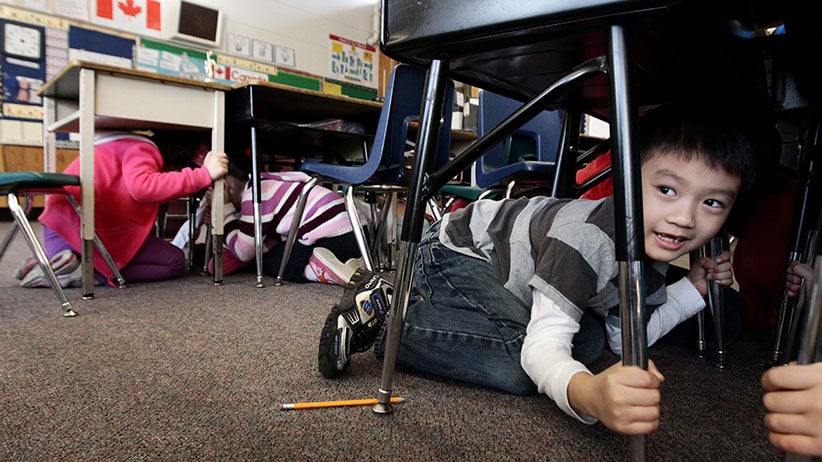 Grade one student Joseph Kim takes cover under his desk during an earthquake drill at Hollyburn Elementary School in West Vancouver. (Darryl Dyck/CP)

For years, many on the Pacific coast have feared the “big one,” a large earthquake that could result in severe damage, destruction and death. The Cascadia subduction zone, a fault line that runs more than 900 km from Vancouver Island to Northern California, is said to generate a large earthquake roughly every 200-530 years. The last time a large one roiled the area was in 1700, meaning three centuries worth of seismic energy could be released upon West-Coasters at any moment.

And a recent study has theorized that there will be an increase in quakes over the next few years, raising the question of whether the “big one” could strike B.C. sooner than even the pessimists thought.

READ: Is Vancouver Island prepared for an overdue earthquake?

In August, geoscientists Rebecca Bendick of the University of Montana and Roger Bilham of the University of Colorado Boulder published a paper that found the number of earthquakes per year increases when the Earth’s rotation slows, as it has been doing over the past five years.

During those periods, the study notes, the planet shrinks at the equator and elongates at the poles, which causes tectonic plates to squeeze together ever so slightly. The change in shape is minuscule (less than 12 mm, according to Bilham), but Bendick and Bilham’s research has found that it can trigger a greater number of earthquakes than usual—a pattern that occurred four to five times this past century.

“If you have a bunch of faults that are all ready to go together and then you just introduce a tiny little nudge into the system that kicks many of those faults over into their failure states, into having an earthquake, you’ll see a cluster of events,” Bendick says. “And because this repeats over and over, you see that pattern of a strong set of earthquakes.”

Bendick and Bilham’s study found that the increase in earthquakes occurs roughly five years after a change in the planet’s rotation. According to them, the Earth started a period of slow rotation around 2013, so if their research is right, we’re about to experience a greater number of earthquakes over the next few years. In fact, Bilham predicts there will be about 20 quakes magnitude 7 or higher worldwide in each of the next five years,  more than the seven experienced in 2017, as of November.

So if the world is about to experience a higher number of earthquakes than average, does that mean there’s a greater chance the “big one” will strike in 2018?

Bendick says that’s not the case. While the areas most likely to be affected by the slow rotation are those that are already seismically active, with existing fault lines, she doesn’t believe it would have any influence on the “big one.” Still, she hastens to add, “I think that that event is an important risk anyway. It’s something people are very worried about. It’s likely to happen sooner than later.”

In B.C., the risk of earthquakes is well-known. This past October, nearly 900,000 people across the province participated in the seventh annual Great British Columbia ShakeOut, an event organized by the B.C. Earthquake Alliance. ShakeOut sees participants all around B.C. perform the “drop, cover and hold on” drill in preparation for seismic events. “This is about awareness and making sure people understand just exactly what our risks are and that they prepare for them,” says David Cockle, the alliance’s president.

“What [the drill] initially protects you from are any precarious things that are going to fall off the walls. We hang pictures on walls, we have lamps and tables and so forth, and this gives you protection to your body and neck area and provides just that minimal piece to help you survive an earthquake.”

While the ShakeOut protocol protects people from the immediate impact of a quake, others in the province are working on early-warning systems that could alert people in the moments before one happens. ShakeAlarm is an earthquake early-warning system developed by the Weir-Jones engineering group, deployed across B.C. in commercial and industrial settings. The system recognizes seismic waves and can deliver warnings minutes before an earthquake hits.

Recently Weir-Jones developed a ShakeAlarm app, which was downloaded by about 10,000 people in a trial from May to October, according to operations manager Andrew Weir-Jones. “It’s a tool. It’s not the answer, and it’s not going to be the be-all, end-all for everyone,” he says. “It will allow you a couple more seconds to get prepared before the shaking starts.”