Inspired by Star Trek to pursue astronomy, 26-year-old Michelle Kunimoto is one of the whip-smart young scientists who just might help us find the first evidence of extraterrestrial life 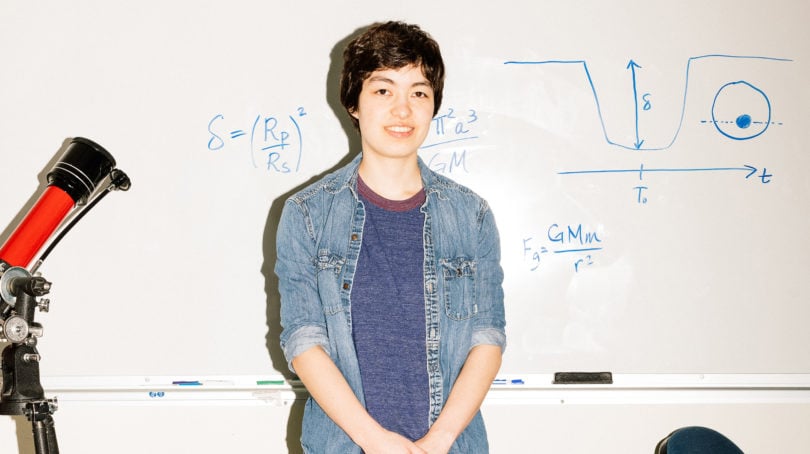 You could say she’s a superstar. Michelle Kunimoto is only 26 and, before even earning her Ph.D. from the University of British Columbia, has already made an impressive contribution to astrophysics. Recently, she published a paper in the esteemed Astronomical Journal describing how she found 17 new planets beyond our solar system—or exoplanets—in addition to the four she had already discovered while still an undergrad.

Not only that, but one of the 17 new planets (they’re actually called “candidate” planets until confirmed) is not just any planet. Situated 1,076 light years away, the body known as KIC-7340288 b has three sought-after characteristics: it’s rocky, a little bigger than Earth, and also in its sun’s so-called “Goldilocks zone”—neither too hot nor too cold. That means it might be capable of supporting life.

But even that’s not the biggest deal. Kunimoto found the planets by figuring out a new way to pore through four years’ worth of data from NASA’s Kepler space observatory. Kepler, launched in 2009 and still in orbit (although now retired from duty), monitored about 200,000 stars for four years in a patch of sky that’s part of our own galaxy, the Milky Way. It was looking for periodic dips in brightness. Those regular dips are a signal that a planet could be orbiting, or transiting, across the face of its star, blocking some of the light from Kepler’s view.

“She did something pretty amazing because she almost single-handedly recreated the state of the art on how to find exoplanets from space-based transit data,” says Sara Seager, a Toronto-raised astrophysicist at the Massachusetts Institute of Technology, who is one of the most eminent planet-hunters on Earth. As it happens, Kunimoto is heading to MIT this summer to do post-doctoral research.

In other words, Kunimoto, who has been studying at UBC’s department of physics and astronomy, is one of the whip-smart young scientists who just might help us find the first evidence of extraterrestrial life. “There’s all this unexplored space around us and we’re just one out of hundreds of billions of planets, so there’s got to be something out there,” Kunimoto says. “And being able to look for new planets that have the potential to support life, that’s one of the very first things to do to be able to actually find another form of life in the galaxy.”

Kunimoto got into astronomy by chance. She wasn’t even thinking about a career in science; none of her relatives are scientists. But then, 13 years ago, when she was in Grade 9 at Lord Byng Secondary School in Vancouver and musing about becoming a classical violist or an engineer, her father introduced her to the original Star Trek television series. She fell hard for the now-campy 1960s show with its flimsy props, gauzy female costumes and flip-phone communicators. And she bonded irrevocably with the intrepid Captain Kirk and his implacable sidekick, Mr. Spock, as well as with their mission on the Starship Enterprise to “boldly go where no man has gone before.”

But it wasn’t only the search for the final frontier that grabbed her; it was also the show’s philosophical bent. “It really instilled a sense of curiosity in me. The entire world is represented on the bridge of the Enterprise working peacefully together,” she says.

Her passion for Star Trek coincided with B.C.’s science curriculum offering astronomy that year, which further fuelled her interest in space. Then, a year later, she inherited a great-uncle’s small backyard telescope. It was meant for birdwatching, but Kunimoto trained it on the moon instead. She was gobsmacked at the detail she could see on the moon’s surface—craters, shadows, textures. So she searched for Saturn with its rings, and Jupiter with its red spot, and then the four big moons of Jupiter that Galileo discovered in the 17th century. “I guess there was a bit of awe and definitely an urge to try to find more,” Kunimoto says. “Not just the close five planets, but what else can I find? Nebulas? And galaxies?”

Kunimoto’s curiosity binds her to centuries of scientific questioning. “I think deep inside we all want to know, in some form or other, why we are here,” Seager says. “Are we alone? It’s that age-old wonder. And exoplanets give us something concrete there because we really can try to answer that question.” 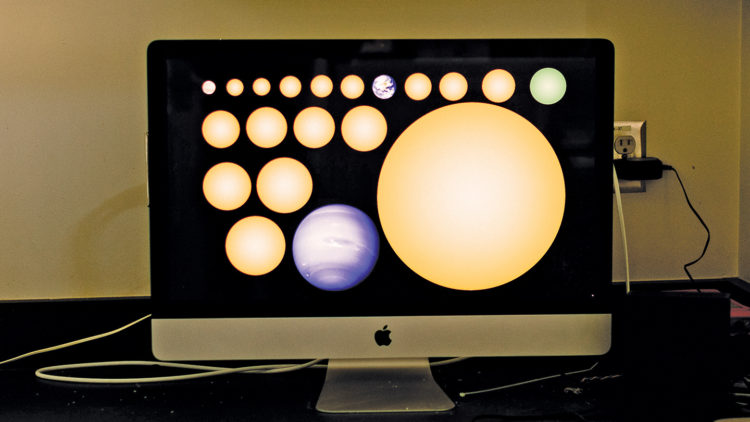 Kunimoto’s 17 ‘candidate’ planets, shown in comparison to a few planets from our solar system (Photograph by Alana Paterson)

But until recently, trying to find other planets—much less life on them—has been dismissed as sheer science fiction. Sharon Morsink, an astrophysicist at the University of Alberta in Edmonton, says when she was working on her Ph.D. at that institution in the early 1990s, people scoffed at the idea of finding exoplanets. “There was the idea that it was almost impossible to do, so why even try?” she says. In fact, the task was so difficult to imagine that it triggered what Seager calls the “giggle factor” among scientists. They simply laughed at a scientist who suggested looking for planets circling other stars.

It was a Canadian team at UBC, led by astronomer Gordon Walker, that made the breakthrough. Walker pioneered a method of tracking slight shifts in the movement of a star as a planet orbits around it to infer the presence and size of a planet. Known as radial velocity, it led to the discovery of the first exoplanet, called 51 Pegasi b, in 1995. It is a massive, hot, gassy planet that is so close to its sun that it makes an orbit every four days. The discovery was so extraordinary that the two Swiss scientists who found the planet, Michel Mayor and Didier Queloz, received the Nobel Prize in Physics last year.

Today, more than 4,000 exoplanets are known, discovered using several different methods of observation. But the Kepler spacecraft has been the most successful and most revolutionary so far, with the majority of its planetary detections made by examining stars near the constellation Cygnus in the north sky. That constellation was first charted by the Greek astronomer and mathematician Claudius Ptolemy in the 2nd century CE.

The fact that Kepler led to the discovery of so many new exoplanets helped establish that planets, including the rocky ones, are common. That was not accepted before the Kepler spacecraft’s launch, despite the fact that it may make sense that some of the estimated 100 billion stars in our own galaxy, the Milky Way, have planets orbiting them like our sun does.

Kepler’s data are public and downloadable. Under the supervision of her Ph.D. adviser Jaymie Matthews, who studied with Walker, Kunimoto used Kepler data to find the new planets by writing what she calls a “pipeline,” or a sequence of computer codes to find planets that were most likely to have been missed by other researchers. She likens it to standing in a crowded room and trying to hear a specific person speaking. She was willing to listen for someone speaking extremely quietly. “As far as I know, Michelle is the only scientist to single-handedly write a detection algorithm for the entire data set to find habitable world planets,” Henry Ngo, her co-author on the latest paper, wrote in an email interview.

Kunimoto is not done planet-hunting, not by a long shot. At MIT this summer, she will be part of the team working on NASA’s Transiting Exoplanet Survey Satellite (TESS), a follow-up mission to Kepler, as well as pursuing her own exoplanet research interests. After that, the sky is literally the limit.

And new hunting techniques are on the horizon both from Earth and from space. They include NASA’s huge James Webb Space Telescope, which will launch into deep, dark space next year, unfolding like an intricate origami sculpture. Along with finding new planets, including small rocky ones, the telescope has the ability to study their atmospheres for known building blocks of life such as oxygen, hydrogen and water vapour.

The world’s largest ground-based observatory, the Thirty Meter Telescope, is also in the works. Meant to be built on a mountain in Hawaii, the project has been delayed in the wake of concerns by some Indigenous Hawaiians that its placement will desecrate sacred land. If completed, it will look more deeply and precisely into space, and will be capable of studying the properties of exoplanets in greater detail than ever.

As Seager says, it’s about taking one step and then the next. First, find the planets, then those in the habitable zone, then examine their atmospheres, and then, who knows? “We’re not expecting Star Trek or Star Wars,” she adds. “We do want to find some version of the little green humanoid, but it’s not going to be E.T.”

Kunimoto is scheduled to defend her Ph.D. thesis in April. She is still a Star Trek fan and tries to stay up-to-date with the latest iterations of the show, as well as with the animated sci-fi show Futurama and the futuristic thriller The Expanse, which is also set in space. In the meantime, she takes out her small backyard telescope from time to time to gaze at the stars. Sometimes she even sets it up in a park with good sightlines near her home in Vancouver and invites passersby to peer through it. They’re always eager to do so—parsing our place in the heavens never gets old.

This article appears in print in the May 2020 issue of Maclean’s magazine with the headline, “Going boldly.” Subscribe to the monthly print magazine here.