Why this stunning dinosaur fossil discovery has scientists stomping mad 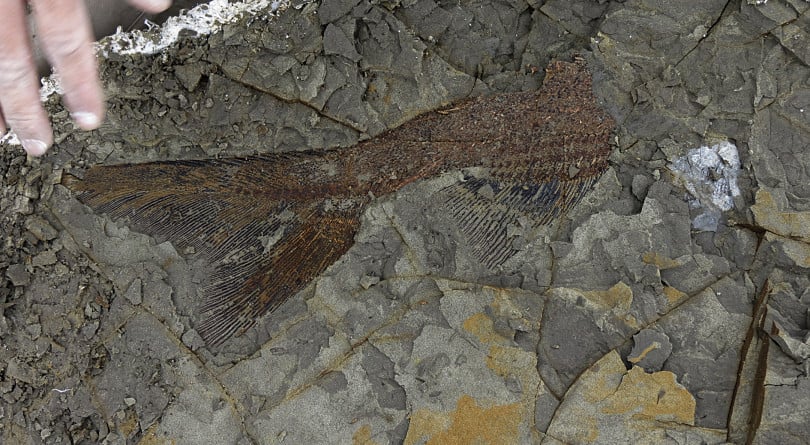 The claims were extravagant. It wasn’t just a remarkable ﬁnd: a paleontological site in North Dakota’s Hell Creek formation that was chock full of impeccably preserved fossils. Those fossils were also so rare that some were the sole North American examples of their kind, including dinosaur feathers and a dinosaur egg containing an embryo.

More astounding still, the site archived the asteroid that hit the Earth 66 million years ago, killing off all non-bird dinosaurs and triggering the ﬁfth mass extinction in the planet’s history.

It was the world’s only record so far of the direct victims of the impact, a dinosaur-era equivalent of Pompeii, the ancient Roman city whose inhabitants were suspended in the very spasm of death as Mount Vesuvius spewed volcanic ash.

The fossil stash was also the Rosetta stone of the last days of the dinosaurs, the key to answering mysteries surrounding which of the giant lizards died when and at what rate, as well as providing clues to the asteroid’s killing mechanism.

Even the name bestowed on the site, Tanis, recalled the ancient Egyptian city where a 19th-century discovery helped unlock the secrets of hieroglyphics. In a sly nod to pop-culture archaeology, Tanis was also the sand-engulfed city where Harrison Ford’s Indiana Jones battled Nazi raiders for the Lost Ark of the Covenant in the Oscar-winning 1981 movie.

“It’s like ﬁnding the Holy Grail clutched in the bony fingers of Jimmy Hoffa, sitting on top of the Lost Ark” is how Robert DePalma, a budding paleontologist and prime excavator of Tanis, described the ﬁnd to journalist and thriller novelist Douglas Preston for a feature in the New Yorker magazine.

As Preston put it, DePalma’s remarkable work held out the prospect of a solution to what Preston called the “three-metre problem” of paleontology: Why have there been no dinosaur fossils found in the three metres below the marker in the crust showing when the asteroid hit, the so-called K-Pg boundary, where the Cretaceous period ended and the Paleogene began? Were they already dead when the asteroid hit?

“Deciphering what happened on the day of destruction is crucial not only to solving the three-metre problem,” Preston wrote, “but also to explaining our own genesis as a species.”

You might expect paleontologists to be cracking open the champagne. But in the weeks since the astounding ﬁnd was announced, ﬁrst in the New Yorker article and later in a scientiﬁc paper in Proceedings of the National Academy of Sciences, their outrage has only grown louder.

The criticism is many-pronged. Much of it centres on what’s in the New Yorker article. According to scientiﬁc protocol, research ﬁndings—especially on this scale—should be ﬁrst revealed in peer-reviewed scientiﬁc literature, not mainstream magazines.

As well, the most spectacular Tanis claims—that there were lots of dinosaurs, burrows still containing fossilized mammals, feathers linked to a giant raptor, eggs with embryos—are described in the magazine article but not in the scientiﬁc paper.

“What is raising alarm bells with researchers around the world is that none of this is even disclosed in the scientiﬁc paper,” says David Evans, Temerty chair in vertebrate paleontology and curator of dinosaurs at the Royal Ontario Museum in Toronto, referring to the magazine’s lengthy catalogue of what he calls “really, really amazing stuff.”

READ: It takes T. rex to tango: Why the dinosaurs danced

DePalma’s team has defended its approach. His co-author Jan Smit, an emeritus geologist at Amsterdam’s Vrije Universiteit, has publicly accused some critics of sour grapes. And the team says future papers will divulge those even sexier discoveries.

“Right there, it suggests this is about protecting further high-proﬁle papers rather than doing a complete analysis of a pretty controversial interpretation of a site,” says Evans.

Also, the most remarkable fossil details in the New Yorker piece—including anything to do with dinosaurs, apart from one mention in an appendix—were absent from the scientiﬁc paper and therefore unveriﬁable.

“It’s this weird mixture of rolling a scientiﬁc paper out that doesn’t actually support the claims that are made in the associated media,” says Kirk Johnson, a paleontologist who is Sant Director of the Smithsonian’s National Museum of Natural History in Washington, D.C., and an expert on the Hell Creek formation. “I think that a lot of the skepticism in the scientiﬁc community is based on that fact alone.”

“The media was written to,” says Jessica Theodor, professor of biological sciences at the University of Calgary and incoming president of the Society of Vertebrate Paleontology. “Anything to do with extinction or T. Rex captures attention in ways that almost nothing else does. People take advantage of that.”

The paper itself describes a strange deposit that DePalma and his co-authors say must have been created just after the asteroid clobbered Earth at what is now known as the Chicxulub crater underneath the Yucatán Peninsula in Mexico. The fallout from that asteroid strike has laid down a global geological marker containing the rare element iridium and glassy residue of vaporized rock from the ﬁreball that followed impact.

Across North America, that marker is about a centimetre thick, the Smithsonian’s Johnson says. Tanis boasts a layer of 1.4 metres, sitting nearly 11 metres below the rest of the K-Pg boundary in Hell Creek, he adds.

DePalma’s explanation is that the asteroid strike in Mexico led to a strong earthquake whose seismic waves reverberated 3,000 kilometres across the continent to Tanis, triggering a seiche—a sloshing, oscillating wave—in a partly or fully enclosed sea water body nearby. That seiche piled up masses of dead and dying creatures into the valley that became the Tanis site, jumbling freshwater and marine creatures together and burying them in ﬁne sediment.

The main clue that it happened shortly after the asteroid hit is that droplets of once-molten rock dated to the impact are embedded in the gills of fossilized ﬁsh deposited throughout the site. The site, in turn, is capped with iridium. This means that Tanis is capturing the ﬁrst “tens of minutes to hours” following impact, DePalma’s paper says.

How to check? That rests solely in DePalma’s hands. Tanis is on private land. DePalma took over excavation rights on it several years ago from commercial fossil prospectors who discovered the site in 2008. They did a few years of digging, uncovering beautiful, fragile ﬁsh fossils that they delivered to museums. By 2012, they felt that an academic paleontologist should take over the site and started shopping their lease around.

DePalma bit. He now has an exclusive long-term excavation lease with the rancher who owns the land, the New Yorker says. That means he controls access to the site. Once fossils are out of the ground, DePalma retains “oversight” of their management rather than giving them to institutions where they could be studied freely, the New Yorker article explains. That level of restriction to fossils is another flashpoint for controversy, says Theodor.

MORE: How geologists found the world’s oldest fossils in Canada

“It’s unethical and unprofessional,” she says. “If you donate your specimens to a repository, the whole point is that other people need to be able to verify your claims. If you’re trying to restrict access to them, that’s really problematic.”

To be sure, DePalma, a 37-year-old Ph.D. candidate at the University of Kansas, has invited not just Smit but also the legendary Walter Alvarez of the University of California, Berkeley—who helped come up with the theory that an asteroid caused the last extinction even before the discovery of the Chicxulub crater—to visit the site and be co-author.

Another sore point is the New Yorker’s assertion that the site will put to rest the three-metre problem. That problem doesn’t exist, although it certainly does serve to pump up media interest in the site. Dinosaur fossils have been found within a few centimetres of the boundary, Evans says. “Nobody thinks that the dinosaurs weren’t around [at impact],” he says. “Most people who study extinction just roll their eyes at the idea.”

And then there’s DePalma himself—a grad student who works unpaid at the Palm Beach Museum of Natural History, a two-year-old storefront in a Florida mall. That museum is now shilling for donations on Facebook on the strength of DePalma’s ﬁnd.

There’s his unsettling hyperbole: Holy Grail, Lost Ark. The hackles-raising imagery of the heroic ﬁgure who eschews the traditional paleontological world to go it alone, slogging through poverty and setbacks only to snag the richest treasure of all. “It’s really not how paleontology is done today,” says the ROM’s Evans.

DePalma’s Facebook photo features a sepia-toned image of him against a canvas tent backdrop, sporting an Indiana-Jones-style vest, knife and bullet-stocked belt. His comments make it clear this was an actual expedition rather than a pose. He’s been known to give talks in the glow of oil lamps for effect. “This guy is sort of doing cosplay,” says the Smithsonian’s Johnson. 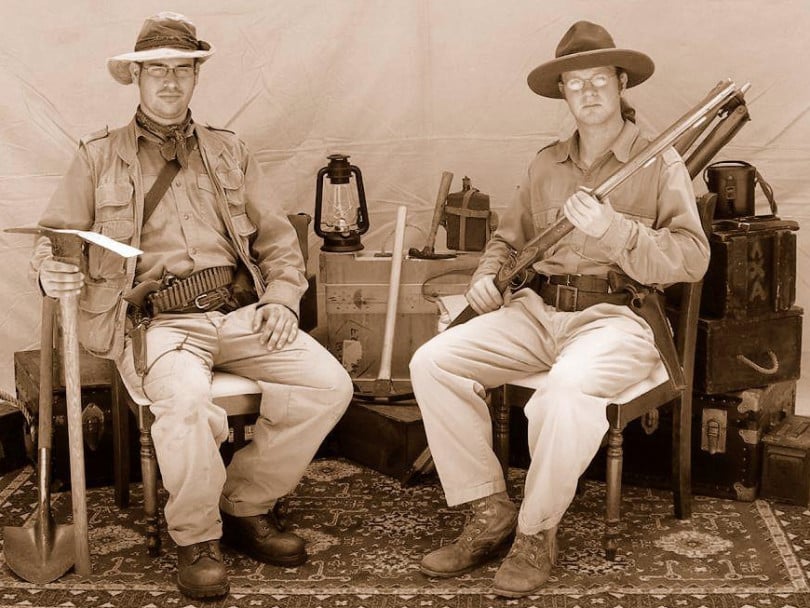 Victoria Arbour, curator of paleontology at the Royal B.C. Museum in Victoria, is not that perturbed. Sure, DePalma is an outsider junior scientist with a bold claim and an eccentric wardrobe, but that doesn’t discount his ﬁnd. “I hope the [DePalma] team will welcome the criticism,” she says. “If the interpretation is good, it will stand the test of time.”

Philip Currie, the fabled dinosaur hunter and Canada Research Chair in Dinosaur Paleobiology at the University of Alberta, adds that while he’s not sure Tanis is the dinosaurs’ Rosetta stone, he’s excited about the ﬁnd and eager to see what else comes from it. “I don’t think it’s the be-all and end-all, but it is from a section we have very little information from. We have so few fossils in that one little interval, it’s frightening,” he says.

Johnson visited the site once, years before the furor. He was in the area doing a topographic survey and his friend, the prospector who discovered the spot, invited him over for a look. It didn’t look like much on the surface, just a place where volcanic ash, with its popcorn-like texture, had long ago choked a river channel. Not like a spot that could turn a young paleontologist into a superstar. And the world of dinosaurs on its head.

Did he kick himself for not realizing what it was? “Just a bit,” he says, adding later: “If he has all the things he says he has, he’s the luckiest guy on Earth.”

This article appears in print in the June 2019 issue of Maclean’s magazine with the headline, “After the find.” Subscribe to the monthly print magazine here.