A father of five girls, his daughters were ‘kind of his boys, too.’ On the farm, he had no trouble finding work for idle hands. 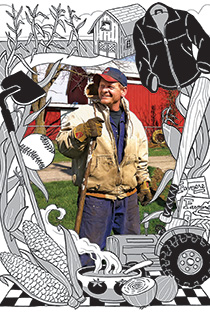 Scott Gordon Patterson was born on Aug. 29, 1961, in Chatham, Ont., to Ross, a corn farmer, and Evelyn, a homemaker. He had two older sisters, Jane and Ann. Growing up in a big yellow brick house on the edge of the family’s 150-acre farm near Glencoe, he learned early the value of hard work—Ross was good at finding jobs for his children, hoeing corn or stripping and repainting furniture.

Often the lone male in a house full of women, Scott was a trickster from the start. He had a knack for teasing his sisters and escaping the blame. And he was quick on his feet. When he was about six, he was standing behind a wagon used for seeding when it started to tip over, so he shot out from under the bottom and narrowly avoided being crushed.

Scott loved baseball and, at 11, as pitcher of the Wardsville Squirts, he won the 1972 Ontario Rural Softball Association league title. After graduating from high school, he briefly attended agricultural school at the University of Guelph’s Ridgetown Campus. But “he was too full of fun,” his mother says. “He didn’t stay long.” Instead, he got his real-world education working three winters in Alberta as a truck driver on a seismic crew in search of oil, and saved to buy his own farm.

In 1980, 19-year-old Scott met 15-year-old Lenore McColl. “I got a glimpse of him at a party one night” in Glencoe, she says, and it being a small community, he asked around about her. They went to a movie on their first date and the attraction was instant. “He had a rebellious side, and he was exciting,” says Lenore. They dated for a few years while Lenore went to study accounting in London, Ont. Toward the end of Scott’s stint in Alberta, he and his father bought 100 acres a few kilometres down the road from the family farm in Glencoe. That year, on his 23rd birthday, Scott proposed. They had a big church wedding and moved into a tiny white house across the street from his family’s yellow brick one.

In 1988, Krista was born. Then came Emily in 1990. Their third daughter, Hilary, was born in 1994 with a chromosome disorder. She couldn’t nurse and had to be fed by a tube inserted through her nostril. “Scott said, ‘Lenore, we’re going to learn how to do this, we’re going to bring her home with us.’ So, through his determination, we did.” At six months old, Hilary died in the night. “We reflected on that time in our life as a time that really brought us close,” Lenore says. A year later, Megan arrived, then Kelly in 1997. That year, they moved from the cramped white house to a new five-bedroom home on the same property.

Scott had been hoping for a boy, but by the time Kelly came, he grew to see he was raising four independent, capable young ladies, Lenore says. In some ways, it didn’t seem to matter that a son wasn’t in his cards. His daughters “were kind of his boys, too,” says his sister Jane. He taught them to ride tractors, shoot guns, play baseball and help out on the farm. He was full of creative punishments: If one missed the school bus, he’d charge her five dollars for a ride. He once took Krista’s bedroom door off its hinges for a week after she’d fought with her sister.

Scott didn’t waste time or money. He often wore the same old clothes and fixed up used cars. Among his few splurges was an Italian leather jacket that he wore to church. Like his father, “he’d have a fat chat with anybody,” Jane says, and he loved his farm: calling his own shots, working hard and seeing the reward of a fine crop. He got a rush from the frenzy of harvest, and read farming magazines for new techniques with which to experiment. Though he had no trouble finding jobs for idle hands, “he wouldn’t ask you to do anything he wouldn’t do himself,” says John Stevenson, who worked with Scott for 20 years.

Family was an important part of farm life for Scott, who would often lunch at his mother’s—tomato soup, and onions in everything. Business was going well and he was looking to buy more property. Krista had decided to become a farmer and, working with her, Stevenson says, “he was just kind of glowing.” On Aug. 30, the day after Scott’s birthday, he and Krista rented a bucket truck, the same one they’d used numerous times before, to fix the roof of the old yellow brick house. Scott made a small repair to the truck, told Krista to go to the other side of the house, and got in the bucket, rising up beside the house. But something malfunctioned, the long arm failed and the bucket fell. Scott was transported to hospital and died of his injuries. He was 52.