Seniors speak up for dying with dignity

Two women, ages 85 and 87, explain why they want to choose how to end their lives

On May 7, Maclean’s, in conjunction with the Canadian Medical Association, will host the town hall, “End-of-Life Care: A National Dialogue” at the Queensbury Convention Centre in Regina, Sask. Click here to register. The event will also be live streamed here at Macleans.ca. 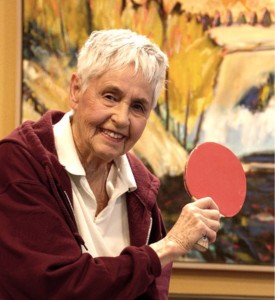 To 85-year-old Ilse Verwey of Toronto the contentious terms of assisted dying are matters of phraseology: palliative care sounds “too terminal”. Why not alternate care, she asks. It’s the same with assisted suicide. “Far too frightening,” she says. Better the term dying with dignity.

To 87-year-old Betty Maryon of Burnaby, B.C., dying is a matter of rights. “I can no longer do almost all the things which gave me most pleasure: Walking, gardening, sewing, knitting, etc., and cannot manage to keep house, shop and cook for myself,” she says. “I do not want to live through a long, slow decline, but would like a quick, peaceful end—at the time of my choosing.”

For both women it’s a matter of ending life as they lived it: on their own terms. Neither particularly fears dying. At their ages, and with their life experiences—surviving Japanese prison camps for Verwey, nursing through the London Blitz for Maryon—they have known sorrow, loss and seen too many deaths in peacetime and in war to run scared from it now. No, what troubles them is the business of dying, and how Canadians, and Canadian health care and laws are so sadly unprepared for the one certainty we all face.

Both women have been tracking with interest Maclean’s series of town hall meetings and webcasts, “End-of-Life Care: A National Dialogue”, held in conjunction with the Canadian Medical Association (CMA). Talking about death is a conversation in all its guises is long overdue, they agree. Some 70 per cent of Canadians haven’t prepared advanced care directives outlining the degree of treatment and resuscitation they want at the end of life, according to a survey by the Canadian Hospice and Palliative Care Association. Almost half have not designated a substitute decision-maker to direct health care for them if they’re unable, and just 30 per cent of Canadians have access to palliative or hospice care. As for euthanasia, medical-aid in dying, or the harsher term, assisted suicide for the terminally ill—concepts supported by about two-thirds of Canadians in poll after poll—it is illegal and is opposed by a majority of Canadian doctors. Still it is an issue the CMA agrees requires public discussion.

For Betty Maryon, a resolution of “choice at the end of life” can’t come too soon. She raised the issue from the floor during the Vancouver leg of the Maclean’s /CMA town halls. “I consider it elder abuse to deny us this right to a free choice,” she said in a two-page statement she gave to Maclean’s. In a subsequent interview she proved passionate and articulate as she explained her reasoning.

Maryon was born in London, England, endured the Blitz as a young teen and served in a hospital in the south of England at the time of the D-Day landing in 1944. She married, moved to Toronto in 1953, divorced, raised her son as a single mom and worked as a computer programmer analyst. She and her sister retired to Saltspring Island, B.C., and lived in side-by-side duplexes for almost 20 years until her sister’s death. She now lives in a retirement residence in Burnaby to be close to her son’s family.

She first made an advanced care directive in 1971 and intends to strengthen it. She has a do-not-resuscitate directive (DNR) on her fridge, and carries one on her person. Copies of her living will are on file with her doctor, son, lawyer and the retirement home.

“It always amazes me that so many people are terrified of dying, and I don’t understand why,” she says. “They won’t know anything about it.” Her great fear is of a physical or mental disability that would render her severely damaged and powerless. She favours medical assistance in dying for similar reasons, and the damage that could result from a botched suicide attempt.

She says she supports the initiative of Manitoba MP Steven Fletcher, a quadriplegic who introduced two private member’s bills allowing doctor-assisted death under certain circumstances. She would like to see a free vote on the issue if it gets that far, and has written letters to Prime Minister Stephen Harper, and federal and provincial health ministers among others. “Since I’m sort of trapped in the situation I’m trapped in, and I cannot have freedom to choose, I decided the best thing was to start kicking up a fuss.”

In return, politicians have offered her “bromides about palliative care.” Obviously palliation should be available for those who need and want it, but if heavy pain medication turns you into a drugged zombie, she said, “What’s the point of that?”

Her son and daughter-in-law have made peace with her decision to end her life at a time of her choosing, should that become an option. “Their attitude to me is ‘we’ll miss you, Mum’, but they are unselfish enough to put their own emotional pain after what I want.”

Meantime, she makes the best of life at her retirement home, although “I’m not a bingo person.” She shares her extensive music collection with like-minded individuals. “My attitude is, sure, as long as I can still make a contribution, and be of some use and reasonably enjoy myself I want to go on living,” she says. “I’ve had to give up so much already. If I have to give up much more, I don’t want to go on.” That time has yet to arrive, she says. “Fortunately, there’s still music and there’s still books.”

Ilse Verwey at 85 and living in a Toronto retirement residence was a competitor in tennis, swimming and table tennis in the Canada Amateur Senior Games of Ontario for over 20 years. She has a remarkable level of fitness and health considering she and her family endured more than three years of harsh treatment and deprivation in a series of civilian prison camps on the island of Java, where they lived during the Second World War, after the Japanese invaded the Dutch East Indies. Verwey is a retired registered nurse, with 46 years of experience in Toronto hospitals. She trained in Australia and Canada. She travelled to the Netherlands regularly to visit her aging parents, and returned to support her ailing 88-year-father when he expressed the wish to end his life. She put her thoughts on end-of-life care in an email to Maclean’s:

I think in the early 1980’s, when I was told by my father that he had made arrangements with his family physician, that—when the new euthanasia law was accepted—he wanted to be able to die with dignity when ready.

It was a heart-wrenching experience when he asked me to come and take him out of hospital to his retirement residence, a decision opposed by some in the family including my brother and sister who were in Australia. I was with him in the home for ten days. He was completely at peace with his decision.

When the doctor came to help him to go to sleep, he was the second person in Holland [to die under legalized euthanasia]. It was a completely peaceful event done by an intravenous injection.

It is my fervent hope that the Supreme Court of Canada will soon accept, with human understanding, the wishes of the terminal individual (who has to be of sound mind) and not be swayed by political grandstanding or religious doctrine to pass legislation. It would help public perception to replace harsh words like suicide and palliative care with more gentle ones like alternative care and physician-assisted dying with dignity.

Physicians and registered nurses should not be condemned for administering palliative medication as ordered in hospitals and home care when medical technology has failed to provide a quality of life.

The Supreme Court of Canada, which decided against legalizing assisted suicide two decades ago, is set to revisit the issue in a hearing likely to be held this fall. Back then, a narrow majority of judges voted to uphold the ban in the heart-wrenching case of Sue Rodriguez—in the final months of her battle with ALS. “If I cannot give consent to my own death,” she had asked, “then whose body is this? Who owns my life?” It’s a question that haunts us still, one politicians, doctors and the public must come to terms with. 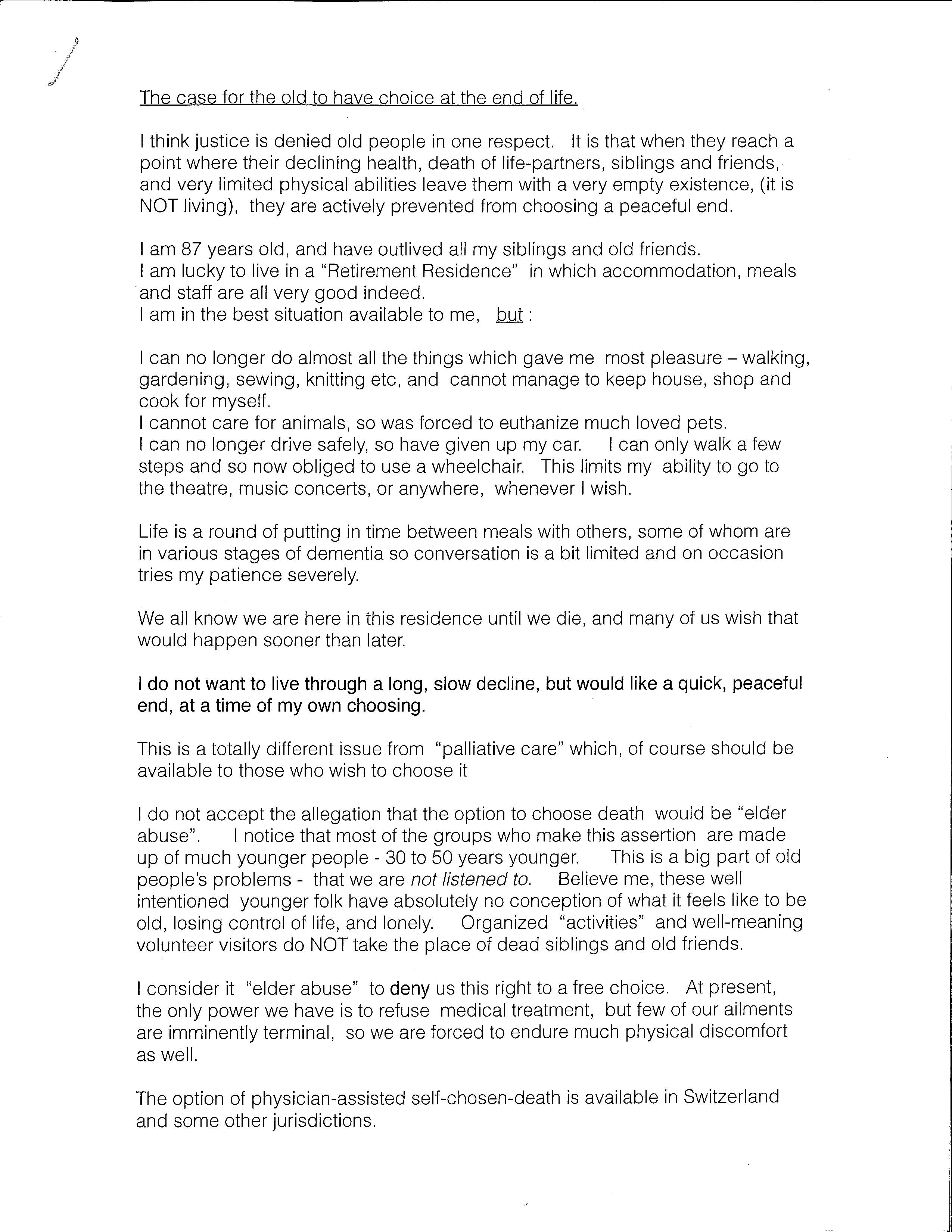 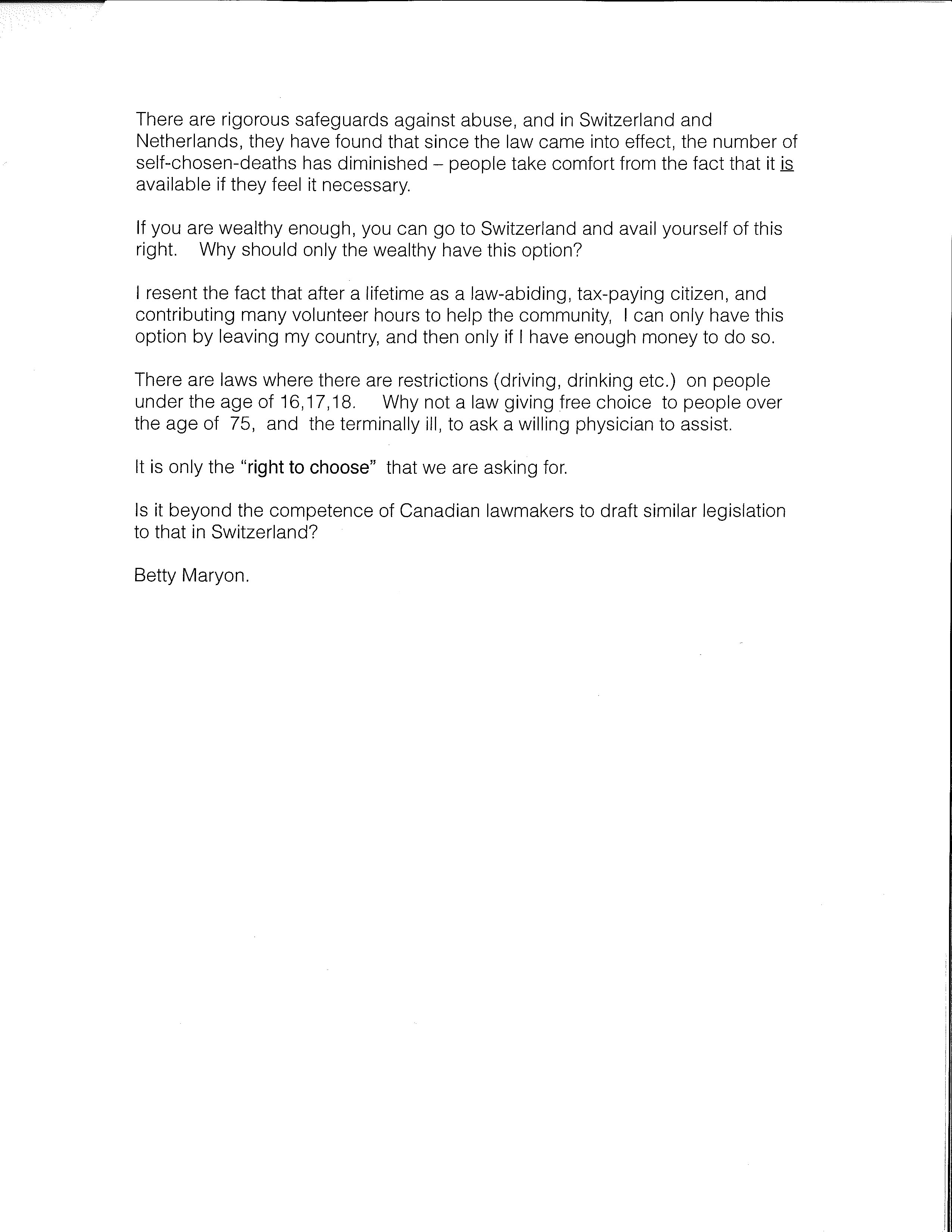