Simon Whitfield on carrying the flag, crashing, and carrying on

In conversation with Ken MacQueen 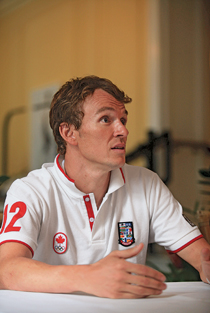 Battered and bruised, Canadian flag- bearer Simon Whitfield sat down with a pint at a London pub to reflect on the close of this, his fourth Olympic Games. It wasn’t how the script was to end: a bloody bike crash during his race; a public spat with Triathlon Canada and the subpar mental and physical race preparation leading to a tearful last-place finish for fellow triathlete and friend Paula Findlay. But he saw far too many glorious moments in London for anything to tarnish the “Olympic ideals” he lives by.

Q: How are your war wounds? I see a few scabs.

A: Yeah, I’ve a good one on my knees. I have a cracked collarbone. I have a large gash under my big toe. I’ve a bump on my noggin, but everything is going to heal.

Q: Backstage at the opening ceremonies, what’s going on around you?

A: So much bigger than I anticipated. Amazing to be around the other athletes. The time to get from the village to the stadium gave us an opportunity to talk. To talk to [equestrian] Ian Millar. To talk to [diver] Riley McCormick, [tennis player] Milos Raonic, to learn about their sports and how they’re feeling, to connect. Walking into the stadium was so overwhelming, in a wonderful way.

Q: What are you thinking, as you’re carrying the Canadian flag in?

A: I was so nervous. I was thinking, do I wave it a lot? Or do I just walk out. The kid in me decided you just start waving. Adam van Koeverden [flag-bearer in Beijing] told me that, too. “Just start waving, buddy.”

Q: You’re watching Paula Findlay, your occasional training partner and protege, as trouble unfolds in her triathlon, and you’re getting angry. Why?

A: I was doing fine until I saw her getting so upset. Before that, [as she fell behind,] that’s racing in your first Olympics, it’s a pretty overwhelming experience. To know what she’s been through in the last year, it was really upsetting. She’s my teammate and it was hard to watch. I felt strongly that you can’t just be teammates when it’s convenient. You have to do it in spite of the consequences. I thought, “What would Steve Nash do?” If Steve Nash’s teammate was getting essentially humiliated on the biggest stage and there was somebody else responsible, would he stick up for his teammate even if it wasn’t convenient? He’s a leader, I feel like he would.

Q: What was the response from Triathlon Canada? Any regrets about speaking out?

A: I certainly don’t have any regrets. I was confronted with a situation where I felt I had to have my teammate’s back, knowing especially the background and how much pressure she was under. It’s very easy for an administrator who’s never been under that true pressure to judge how somebody will react. The expectation of her all this last year was to be perfect; perfectly prepared and make perfect decisions, and she didn’t always make perfect decisions and the pressure got to her. She will rise to the occasion in future.

Q: Was it largely because she wasn’t able to recover properly from her hip injury?

A: I don’t want to get into detail simply because it’s over. I said my piece. I felt like the people who were responsible needed to stand up and be accountable. My timing wasn’t perfect.

Q: About your crash. After all the years of sacrifice and training, how do you come to terms with having your moment stolen from you?

A: I remain true to what my goal was all along. I got here prepared. I had an incredible swim, I put myself in position, and then I screwed up. There’s no way around it. You’re going to have to edit this, I just f–ked up. To get a medal for me at that race, how it unfolded, I would have had to perform absolutely out of my mind. That’s an honest answer. I would have been top 10. Maybe top six. Maybe.

Q: You pumped up Paula after her race, what has she said to you since the crash?

A: She was so genuinely upset and so genuinely concerned. I spent so much time with her in the month before the Olympics that we developed a great friendship. Everyday since that race I’ve seen her, and I’ve seen Adam van Koeverden, my very good friend, and we shared some laughs, chats about the disappointment, and pats on the back. The same with [Canadian triathletes] Kyle [Jones] and Brent [McMahon], I got some pretty hefty, almost re-broke-my-collarbone hugs from the boys. I thought of something walking home yesterday, it’s a line from a the start of a Tragically Hip song: “It’s a good life if you don’t break too many guitar strings. And it’s a pretty good life if you do.”

Q: Leonardo Chacón, “the Costa Rican athlete that fell down behind you,” as he delicately put it, wrote you a gracious Facebook post calling you an inspiration, and saying it was an honour to race next to you.

A: Exactly. No pun intended. To be able to give him a hug and apologize. I felt so terrible for this young guy at his first Olympic Games. He also had an incredible swim, that’s why we were in that position. I was gutted to take him out. So we were able to hug it out. And then to read his posting. I’ve had an incredible Olympic experience, even with the race— heck, with the race, that too is experience. It was my fault.

Q: It makes you realize there’s so much more to the Olympics than the podium.

Q: You’re here with your family. You took your kids to a museum today. How does it feel to live a normal life?

A: I feel I should be out more cheering my teammates on, but I also spent the last five weeks away from my family. That’s a lot of time when you have a two-year-old and a five-year-old. From the day after Christmas until the Olympics I spent almost half the year away, parenting on Skype. That’s a lot; too much. So I’ve been at the park, I’ve been at breakfast whatever time they want, with no agenda; no run to get home to; no “I’m sorry I can’t play too intensely at the park because I’ve got to swim later and I’ve got to worry about being sore.” It’s been all about them. To be at the museum today and to see their faces has been awesome. And to drink a pint with my wife, Jennie, to have some adult time is great.

Q: Have you talked out what the future holds?

A: We haven’t, but the wonderful thing about us is we are a team. I won’t tell her what I’m doing, I will discuss it with her and she will have an enormous amount of input into where my career goes from here.

Q: It must have been great that she was here the day of the crash and in the days since.

A: It was great, it was my only breakdown moment, just knowing how much she sacrificed. But then, her perspective was so wonderful. [Olympic champion rower] Marnie McBean was at the race. She has seen spouse after spouse deal with the disappointment or excitement of their partner performing, or not performing. Her first comment was how incredible a perspective Jennie had on the race. She was upset for me but she understood that the sun rises the next day and our kids are healthy and life goes on.

Q: The end of every Olympics is a time of change. People like Clara Hughes won’t be back. Have you talked to athletes who’ve stepped off the stage? Is it a scary prospect for them?

A: I haven’t spent a lot of time with Olympic athletes who have moved on. I’d love to tell you I won’t have my moments but I will have my moments of struggle. That’s inevitable. I’ve had one already, and it’s been four days. They’re coming. And the first one will probably be the day I’m able to go for a run. Running is my time to process. I have great friends. I will go on adventures with my wife. I’m still going to race, I’m not done yet. I’ve hit the next chapter so I’ve got to decide what’s next.

Q: You’ve been to four Olympics. How do you rate the organization of these Games, and how the British public has responded?

A: First of all the [Canadian Olympic Committee] and the support we have at these Games, I mean, we have everything we need. It’s incredible. [The British] set an incredible standard, this has been an absolutely magical Olympic Games. I’m seeing it through somewhat rose-coloured glasses. Aside from the crash, I’ve enjoyed every single moment.

Q: This followed the same arc as the Vancouver Games: doubts and whinging, and a transformation with the opening ceremonies.

A: Boom! It’s true. Every time it’s “venues aren’t going to be done. The traffic is going to be unbelievable. The weather isn’t going to co-operate.” And things just kind of fall into place. As athletes are committed to excellence so are the event organizers. That showed here.