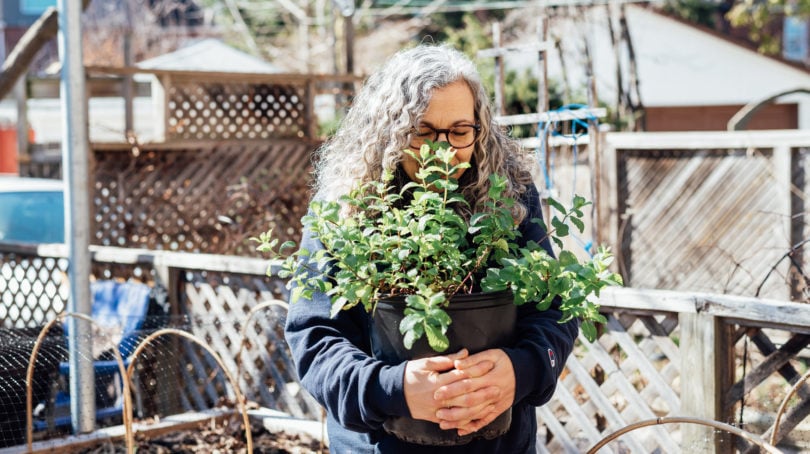 Arlene of The Backyard Urban Farm Co. (Photograph by Brianna-Roye)

Diane Archer wanted to grow her own food long before her husband’s restaurant closed, her six-year-old son’s school shut down and she was forced to nix the lease on her downtown Pilates studio. The COVID-19 pandemic merely accelerated her garden’s timeline. After a mid-March snowmelt, the 40-year-old mother of two gazed outside at her backyard, a shady but workable plot in St. Catharines, Ont., and made the decision. “Having some extra food coming in this summer sounds like a pretty good idea, rather than having to worry about paying for our next meal,” she figured. So on a chilly Sunday morning, she drove to the local Canadian Tire, bought up seeds for lettuce, arugula, tomatoes, beets and kale, and began planting that week with her son.

Archer is one of many worried Canadians turning to their yards for comfort food. As national lockdowns sowed economic chaos, Canada’s garden industry boomed, as several seed banks, garden centres and urban farming organizations reported spikes in website traffic and overwhelming digital orders. West Coast Seeds, an organic seed farm in British Columbia, sent a letter to customers warning of delays due to “a remarkable surge in demand for seeds and gardening equipment.” In the Maritimes, the family running Halifax Seed noticed a similar trend. “Gardening is a natural self-distancing activity,” says Ali Tregunno, who runs the company’s branch in Saint John, N.B. “We’re getting people who have never grown their own food asking, ‘What’s the simplest way to start?’ We’re getting that question now more than ever.”

READ: ‘Am I at risk if I pass someone on a crowded sidewalk?’ (and 11 other coronavirus questions)

It’s a trend Arlene Hazzan Green has seen coming for a decade. Eleven years ago, after learning about the threat of peak oil, she and her husband quit the film industry to become edible-garden landscapers and created the Backyard Urban Farm Company. Since then, she’s seen homegrown farms sprout from obscurity into the mainstream. Since the coronavirus outbreak, she says, their website traffic has doubled, with new and existing clients voicing concern over quality control at supermarkets.

Hazzan Green divides the surge into two groups: haves and have-nots. While the latter group comprises marginalized communities whose food stability was precarious even before the pandemic, the “haves” are those whose jobs are not necessarily threatened, and who farm their yards as a hobby, to educate (and spend time with) their children, or simply because they can. Miranda Black, who works at a downtown Toronto magazine and lives on the second floor of a rental house, falls into this category. With her landlord’s blessing, and the co-operation of her downstairs neighbours, she and her partner spent several days in March pulling up a cinder-block patio on the property and digging a 100-sq.-foot garden in its stead. “There’s definitely more of a need for food security at this time,” Black says, noting that marginalized groups will be hit hardest by food shortages and rising costs. “By removing ourselves from having to go to the grocery store so often, it will remove some stress from the system.”

But most Canadians probably won’t need to worry about food shortages. On March 20, the federal government announced its travel restrictions would not apply to essential businesses such as food transportation, nor to seasonal agricultural workers, which eased fears among Canadian farmers who rely on migrant workers. (All temporary foreign workers will still have to self-isolate for 14 days upon entering the country, but it’s not yet clear whether that will cause significant delays.)

“We’re going to have access to food, no problem, but it’s not going to be perfect,” says Sylvain Charlebois, the director of the Agri-Food Analytics Lab at Dalhousie University in Halifax, who studies food supply and management. At an average grocery store, he says, Canadians may sometimes notice shortages of certain items such as flour and eggs, which have already been hastily scooped up by anxious shoppers. Fresh produce, which can’t be hoarded, may rise in price, he says, but that’s due to a Canadian dollar hammered by plummeting oil prices and the coincidentally timed petroleum price war between Saudi Arabia and Russia: “That’s why the Canadian dollar is so weak. It has nothing to do with COVID-19.”

Still, Charlebois understands why people would find comfort in their backyards. He grew up on a farm, harvesting corn and beets every year. “Growing a garden will make you feel good and make you feel in control, and that’s worth a lot,” he says.

It’s certainly true for Archer. Spending an hour each day in her garden has proven a relaxing break from the stress of raising two young boys with no stable income. She’s even started keeping her eyes open for weeds she can forage. “Knowing I’ll be able to grow more and be more experienced—it’s building toward a more food-secure future for my family,” she says, “and that feels good.”

This article appears in print in the May 2020 issue of Maclean’s magazine with the headline, “A place to grow.” Subscribe to the monthly print magazine here.