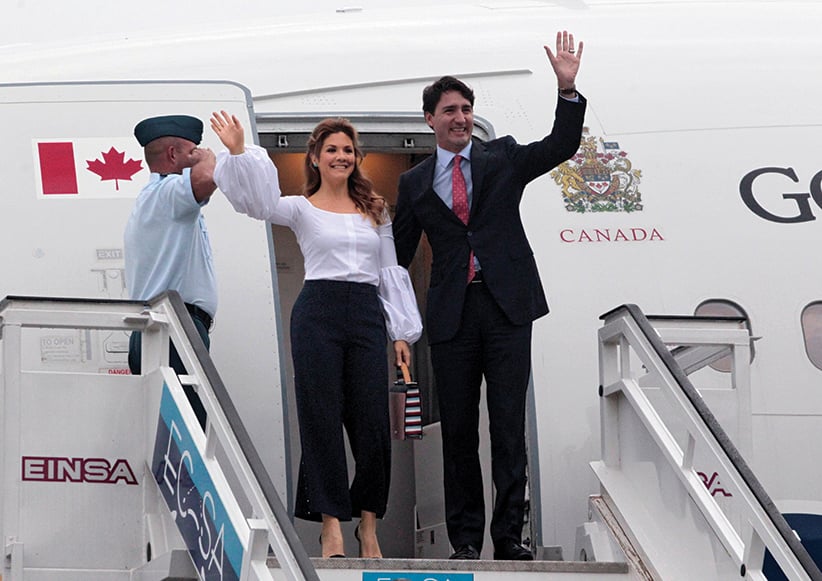 Grégoire Trudeau and her husband in Havana last November. (Reuters)

It’s 2017. So if Sophie Grégoire Trudeau wants to post on Instagram on the eve of International Women’s Day, that’s her prerogative. It’s her right to present herself holding hands with her husband, gazing up at him adoringly, alongside a message that extolls women to post similar photos with the men in their lives as part of a new hashtag movement to “celebrate the boys and men in our lives who encourage us to be who we truly are, who treat girls & women with respect, and who aren’t afraid to speak up in front of others.” It’s totally her prerogative, just as it was Emma Watson’s right to pose in any manner of dress or undress she wants in the pages of Vanity Fair to promote her new Disney film.

Of course, this being 2017, it’s also women’s prerogative to disagree, to question, even to scold, as tiresome as it may be. Thus we saw Watson lambasted for being an avowed feminist who dared exercise her choice by posing in a scant, crocheted bolero that raised unrelenting discussion about nipple air-brushing.

Similarly, Grégoire Trudeau been excoriated and defended for a stance that’s generated such Onion-worthy headlines as “For International Women’s Day, Sophie Gregoire Trudeau Wants You to Celebrate Men.”  It’s tempting to see it all as a piece of high-concept performance art on Grégoire-Trudeau’s part: a parody of Stepford-wife dependence intended to  incite discussion. Or, even stealthier: a send-up of the mercantile branding exploitation often seen on IWD, that sacred 24-hour period in which more than half of the population is given the same accord as donuts (June 2) or Hobbits (Sept. 22). In the weeks leading up to IWD, I’ve seen a flurry of PR pitches on everything from “empowering” hair extensions to offers for interviews with “feminist” wedding planners.

What actually is going on here is trickier to unbundle. Certainly Grégoire Trudeau’s assertion that sexual equality will not be achieved without full societal buy-in, both men and women, is unassailable.  It’s the same sentiment behind HeForShe, an organization Watson supports. Fittingly, Grégoire Trudeau and Watson, a UN Women Goodwill Ambassador, are celebrated “BFFs”;  when the actor visited Ottawa in 2016 to attend the One Young World Summit, the two women were photographed free as the breeze on a Vespa. 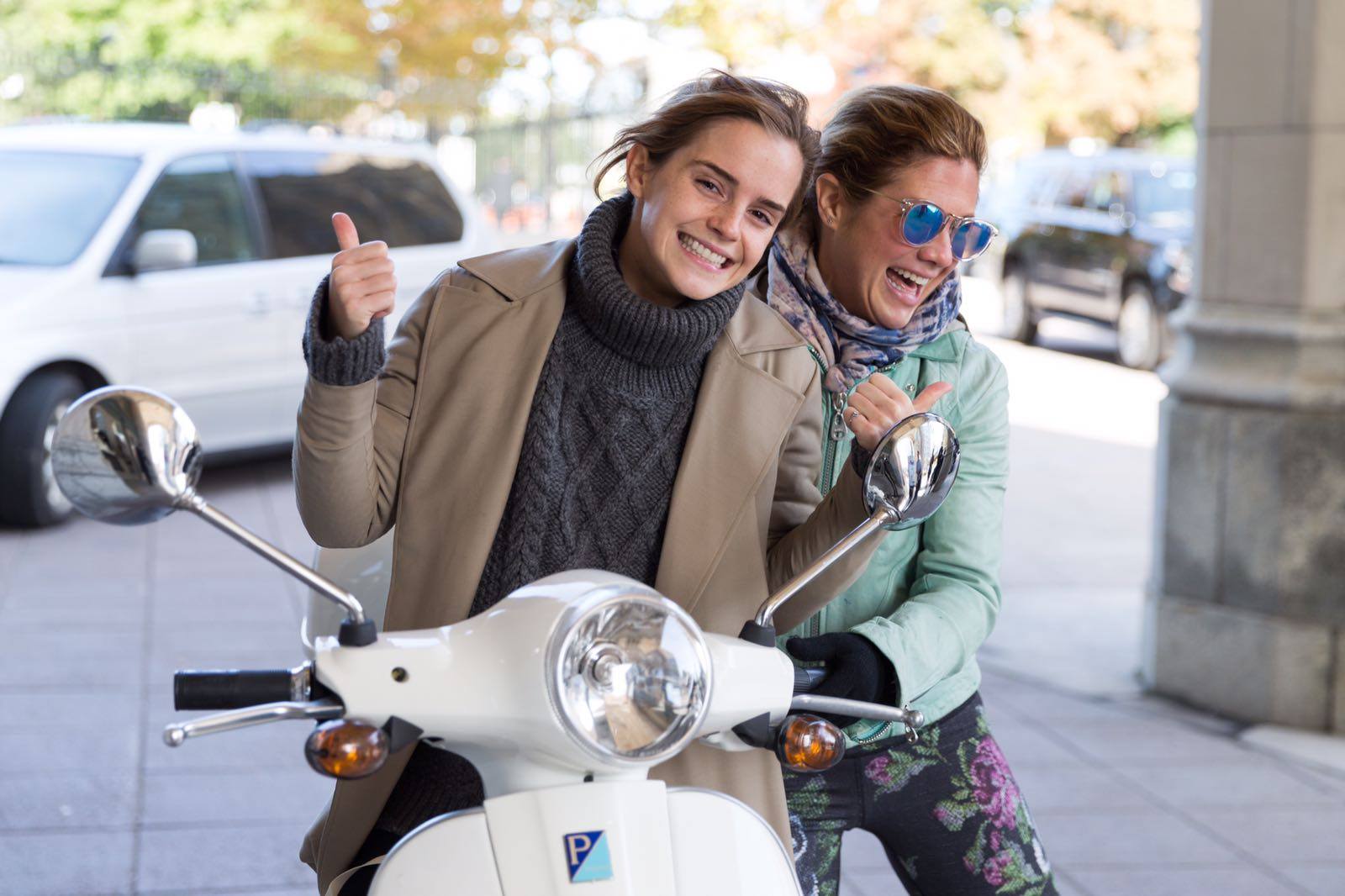 Inviting men to photo-bomb IWD, however, is one bridge too far. But it’s also Grégoire Trudeau playing a long-established female role: the good wife. Decades ago, that meant greeting hubby with a martini at the end of his long work day. Now it’s collaborating on the family brand—in this case, thrusting a husband not exactly averse to Klieg lights, front and centre on a day devoted to estrogen empowerment. Certainly IWD is “feminist” PM Christmas. Yesterday, Trudeau was in the middle of a photo celebrating female chiefs of staff on the Hill. Today, he tweeted an image of in which he stood before 338 young women in the House of Commons, an event organized by Equal Voice, a group committed to advancement of women in politics. At a time female politicians comprise less than one-third of Parliament and routinely receive death threats and harassment, the incentive is vital; this week, the advocacy group released a poll that found Canadians believe we have more than enough women in politics.

In the process, Grégoire Trudeau is buttressing her husband’s feminist bona fides at the very moment they’re under attack. Only two days ago, Oxfam Canada criticized the Trudeau government for being more talk than action on women’s issues. Trudeau received heat for leveraging his feminist identity by making a roundtable about female entrepreneurship the centrepiece of his first visit to Washington, which in turn helped burnish a misogynist president as a champion of female advancement. (Today,  in a seeming rebuttal to Trump’s global aid abortion ban the PM earmarked $650 million for women’s healthcare globally.) Discontent with Trudeau “feminist” label was rumbling as long ago as last year, prompting me to write this for Maclean’s.

What makes Grégoire Trudeau’s Instagram post most perplexing, and distracting, is that it’s so off-brand: though clearly well-intended, the message comes off as smug, privileged, out-of-touch. It presumes all women have a man or men in their lives who offer support. It raises the notion that women need male affirmation to be “who we truly are.” It also makes the men the heroes of the story, as seen elsewhere this week when the manager of a trillion-dollar index fund was given props for temporarily placing a bronze statue of a defiant girl facing off against Wall Street’s famous bronze bull. His intent was noble: to highlight the corporate gender gap and make it clear he wouldn’t invest in companies that didn’t encourage female advancement. The symbolism of a young woman confronting a goring animal alone speaks for itself.

There’s no question women who have supportive men—fathers, brothers, partners, bosses—in their lives are fortunate. Yet it’s also true that many women haven’t and don’t—and become valued role models and leaders nonetheless. Recently, Sheryl Sandberg of Lean In fame acknowledged that as a happily married mother she couldn’t understand why single mothers couldn’t “lean in.” Now a widow, raising children alone, she understands (and she’s a millionaire).

So, on the one day officially sanctioned as “Women’s Day,” women on their own deserve the spotlight too. As do the many, many women who choose not to agree or to play nice or to buy into a request from a political wife to support yet one more hashtag movement. That too is our goddamned prerogative.