A mother and lawyer, she battled cancer three times. After losing her arm, she learned to change diapers left-handed. 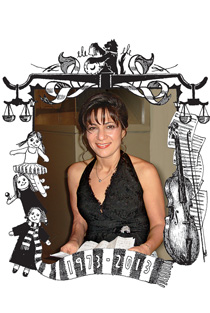 Sophie Rebecca Boulakia Dwosh was born on March 27, 1973, in New Orleans, the middle child and only girl in a family of five. She was two when they moved to Ottawa after her father, Jean, found work as an economist for the federal government. Her mother, Danielle, became a French teacher at a Jewish day school.

Sophie and her two brothers had no choice but to play a string instrument: Their father dreamed of having a string quartet among his children. Sophie learned to play violin and viola, but without a fourth child to complete the quartet, Jean registered Sophie in local music competitions to play solo or with her older brother, Charles, on cello. “Anytime there were people over, we’d be forced to pull out our instruments and play a duet for them,” Charles says.

Sophie was a responsible child, reading bedtime stories to her younger brother, Jonathan, and tucking him in on evenings when their mom was at night school pursuing her master’s degree. Sophie dreamed of being a lawyer and, after fast-tracking through high school, attended McGill University. After two years in Montreal, she was planning to spend her third year studying abroad, but that changed when she was accepted into the law program at the University of Ottawa.

After her first year in law school—and to make up for the missed opportunity to live abroad—Sophie set off on a four-month trip to Europe. Soon after touching down in France, however, her family back home got test results showing Sophie had sarcoma, a rare form of cancer, in her right arm. She flew back to Canada to start radiation treatment. Sophie could no longer play viola or write after the surgery to remove the tumour, but she adapted. She taught herself to write with her left hand so she could finish all her exams. Her goal wasn’t just to finish law school; it was not to miss a single semester, Charles says. She graduated with the rest of her class and quickly found work in Toronto with the corporate firm Torys LLP.

In 1998, Sophie went to a party at an Italian restaurant and sat across from Hy Dwosh, a medical resident. She asked him out and, on a first date, they went to a Rolling Stones concert using her firm’s tickets. A year later, they got engaged and moved in together. Sophie started a new job as an in-house counsel with Rogers Communications and, soon after, was also pursuing a master’s degree at night at York University’s Osgoode Hall law school. Even at home, she would rarely relax. “She would get up early to do laundry. I’d be in bed and she’d be stripping the sheets,” says Hy. The couple married in 2000 and had their first daughter, Judith. When Sophie graduated from Osgoode in 2003, she carried Judith onstage as she accepted her degree. In 2004, they had a second daughter, Gabrielle. Wanting to have more time with her kids, Sophie became an in-house lawyer for Smuckers, which offered part-time hours.

In 2009, Sophie was asked to be in a commercial for Princess Margaret Hospital, displaying a sign to say she was cancer-free for 15 years. She declined, because she was pregnant with a third daughter, Naomi. Less than two weeks after giving birth, Sophie discovered the cancer in her right arm had returned. She fought the cancer, but her arm had to be amputated.

Just as she had 15 years earlier, Sophie adapted. She learned to cook with her left arm again, bought a modified tricycle to bike with her kids and used a specialized wheel in order to drive her car. “She could change the diaper of a squirming toddler with one arm,” Hy says. Her daughters’ hobbies became her hobbies—be it ballet, singing or Harry Potter.

When parents from her children’s school found out about Sophie’s cancer, they set up a volunteer group meant to help parents in adverse situations, by making meals or driving kids to school. Sophie was supposed to be a recipient, but she signed up as a volunteer to help other parents.

In 2011, cancer was discovered in her lungs and Sophie needed surgery again. In between chemotherapy treatments, she took the family on trips to New York and Israel. She and Hy also had a holiday in Barcelona. The cancer continued to spread, forcing longer stays in the hospital, which she despised, as they kept her away from her children. She left the hospital in July and spent her days visiting with family or sitting in a lounge chair by a backyard pond. On Sept. 29, she stopped breathing. She was 40.

FILED UNDER: Sophie Dwosh the end