This Syrian asylum seeker is trapped in an airport. Meet the Whistler, B.C. woman hell-bent on rescuing him 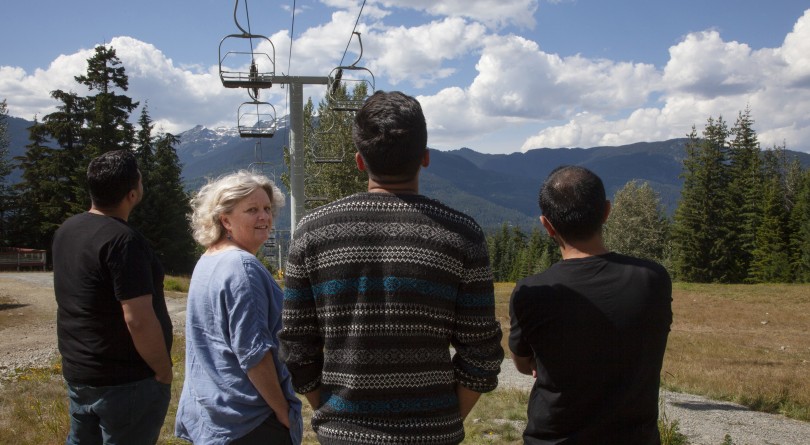 This is Laurie Cooper. She lives in Whistler and has sponsored a number of refugees. She stands in the pictures with three men, two of who are from Syria, and one who is from Afghanistan via Pakistan and Turkey. Two of these three men wish to conceal their identity. (Photograph by Jen Osborne)

Hassan Al Kontar spends his days like a caged lion, pacing the length of his home in the arrivals transit lounge at Kuala Lumpur International Airport. The Syrian asylum seeker, who has been living in the featureless hallway since March 7, keeps his spirits up by dreaming of someday meeting Laurie Cooper, a resident of Whistler, B.C., whom he considers his saviour.

Not only has Cooper, through her group Canada Caring, raised the money to privately sponsor Al Kontar as a refugee, she has also lined up a job for him and housing at the Fairmont Chateau Whistler, one of the resort municipality’s poshest hotels. “She is literally the face of hope,” says Al Kontar, whose lifelines to the world are WhatsApp and Twitter.

Cooper, who works in media and public relations, is a den mother of sorts to more than a dozen Syrian and Afghan refugees. In co-operation with the B.C. Muslim Association and numerous friends and benefactors, Cooper has sponsored 11 refugees to come to Whistler, and nine more to Vancouver Island.

On a recent hot July afternoon, she met up with three of the young men, two Syrians and an Afghan, who recently arrived in Whistler from Turkey, where they had been waiting for their sponsorships to be approved. As a steady stream of Mercedes, Audis and Porsches pulled up at the resort’s valet parking, the three men paused for a photo in the rock garden. They were excited about starting work as room cleaners the next day, the beginning of a normal life after years on the run. They hugged Cooper, a bubbly, fair-haired woman with piercing blue eyes. “Words are not enough to express her love for us and the love we have for her,” said Inam, the Afghan refugee, in fluent English. (All three asked that their last names not be used for fear family members who remain in their home countries could be targeted.)

Inam and his two Syrian friends, Marvin and Ahmed, dream of earning enough money to someday sponsor their families. But after only three days in Canada, the shock of Whistler prices, which are among the highest in B.C., are already kicking in. “We need to buy a house, which here is maybe impossible,” Inam said.

Cooper’s refugee resettlement involvement began as it did for many Canadians, when she saw the image of the little Syrian boy Alan Kurdi’s lifeless body washed up on a Turkish beach. A mother of two adopted children, Cooper resolved to do something to help the plight of millions driven from their homes in a brutal civil war.

Not once, but three times, Cooper paid her own way to volunteer at refugee camps housing Syrians in Greece, the destination Kurdi’s family was trying to reach when their boat was swamped in the choppy seas.She greeted new arrivals, built shelves, sorted clothes and wrote articles about their plight. “It changed my perception. It sounds so trite, but the refugees are just like me,” she says. Among those she met were doctors, lawyers and engineers, many of whom spoke English. They risked the treacherous crossing with little more than their smartphones and one plastic grocery bag of possessions. She thought of the wasted talent, of how valuable they could be to Canada.

She knew Whistler businesses needed staff, and when she returned home she told the Fairmont Chateau Whistler managing director Norm Mastalir about the remarkable refugees she had met. Mastalir told her he’d be willing to offer jobs to refugees if they were the right ﬁt—singles or couples able to communicate in English.

Her contacts identiﬁed suitable candidates, while the B.C. Muslim Association freed up sponsorship spots, donating a portion of the $4,200 needed to sponsor each refugee. Cooper found benefactors to raise the rest. Job interviews were conducted by phone and 15 months later, the ﬁrst successful candidates began to arrive.

MORE: How Canada could prepare for potential new wave of asylum seekers

When she heard about Al Kontar stuck in the airport, Cooper didn’t hesitate. “I said okay, we’re going to sponsor one more.” Al Kontar, 37, is Druze, a persecuted minority group in Syria and a paciﬁst who says, “That is not my war.” He evaded military service by working overseas in the United Arab Emirates. In 2017, his visa ran out. He overstayed, and was caught and deported to Malaysia, a country that accepts Syrians without visas. Then his Malaysian visitor visa expired, and when he tried to fly elsewhere, he couldn’t obtain the necessary travel documents. As of this writing, he was stuck in the airport, his status in bureaucratic limbo.

Air Asia* staff give Al Kontar leftover airplane food, chicken and rice, three times a day. And with money funnelled to him by Cooper through a network of passengers, sympathetic airline staff fetch him an occasional Starbucks coffee or McDonald’s meal. He spends his days walking and watching passengers board planes to places he can’t go. His life is not unlike that of Tom Hanks in The Terminal,minus Catherine Zeta-Jones. “Sometimes I hide, because I don’t have the energy to keep repeating my story,” he says.

Al Kontar’s sponsorship application is now under review by Canadian ofﬁcials in Singapore, where the wait can be up to 22 months. Cooper is lobbying the government to expedite his case. But Canadian immigration ofﬁcials say it would be unfair to bump Al Kontar to the front of the line when so many others are in unfortunate situations. Cooper said she will keep pushing, adding: “I just hope that if my son was in that situation, someone would help him.”