The value of Anonymous lies in anonymity itself 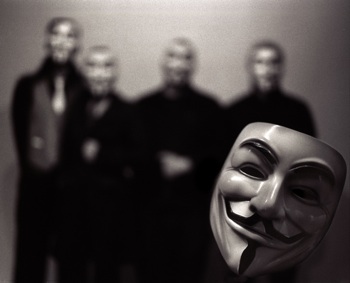 Is anything on the Internet more misunderstood than Anonymous?

Call them a “group” or “hackers,” or “cyber-activists,” or “cyber-terrorists,” and you’ll be mostly wrong and totally reductive. They’ve been more accurately described as a “culture,” an “idea,” or a “phenomenon,” but those all seem kind of flaky and much too flattering. Anonymous defies description and classification by design, tying those of us who aim to understand them into knots. Good for them!

For real insight into Anonymous, I turn to Gabriella Coleman, a McGill professor who approaches them as the subject of  anthropological study. Writing this week for Al Jazeera, Coleman aims to clear up some sloppy thinking about Anonymous, while putting forward a reasoned defence of their value. Her piece is combatively titled “Everything you know about Anonymous is wrong.”

Coleman respectfully rejects gloomy think-tanker Evgeny Morozov‘s argument that all Anonymous provides is cheap spectacle and an excuse for governments to ramp up online censorship and surveillance. Authorities would be doing this anyhow, and spectacle needn’t be cheap. Anonymous’ mastery of memes, jokes, melodrama and digital theatrics are perhaps its strongest weapons. They’re why we can’t stop talking about them.

But to what end? While Anonymous’ raids and operations have targeted many an individual and institution, it  has no consistent ideology or goal, save perhaps anonymity itself. These days, that’s enough. Here’s Coleman:

“In an era when most of our personal data is archived online – in a time when states and corporations collect, market, and monetise our plans and preferences – there is indeed something hopeful, one might even say necessary, in Anonymous’ effacement of the self, in the cloaking of their identities, in striking at legislation seen to threaten privacy, and seeking to expose the depth and extent of privatised government contractors that have rapidly emerged as a security apparatus parallel to that of the national government.”

It has become a built-in control against those who would curtail the wonderful chaos of the digital commons.