Netflix exaggerates on that one—but not by much 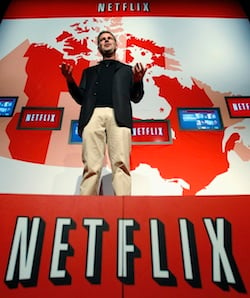 I don’t know about you, but every time I exceed my monthly Internet limit and get a hefty bill, I feel like my human rights are being violated.

On Wednesday, Netflix chief content officer Ted Sarandos was talking about Canadian Internet providers and the low monthly usage limits they give customers at the Merrill Lynch Media, Communications & Entertainment conference in Los Angeles. Here’s how he responded when asked if Netflix’s mediocre content offering in Canada was limiting the company’s growth here:

Viewing hours are almost… are very similar [in Canada] to the US. The problem in Canada is not content, the problem in Canada, which is one of our strongest markets, is they have almost third world access to the internet. Not because it’s constrained for any reason except for money. They have very low datacaps with all the broadband providers in Canada and they charge an enormous amount if you go over your broadband cap. It made us be much more innovative about compression and delivery technology so we are less broadband consumptive in Canada… It’s almost a human rights violation what they charge for internet access in Canada.

The comments took me aback when I first read them. I’m usually the first in line to point out Canada’s broadband shortcomings, but Sarandos seemed to be taking it over the top. Human rights violations? Come on. Perhaps Netflix executives should do some time in Guantanamo or try out some water boarding before they throw such accusations around.

Is expensive Internet a bad thing? Absolutely. Is it a human rights violation. Not really.

And yes, Netflix’s Canadian offerings are quite crappy. Amazingly, that hasn’t stopped the service from growing quickly here. At least 10 per cent of Canadians are subscribing while one analyst believes that number to be closer to 17 per cent.

Hyperbole aside, I wondered if there was anything to Sarandos’ comments, particularly in regards to “third-world” Internet access. I figured I’d check the numbers again.

One good source is the Ookla Net Index, which compiles billions of test results to rank countries in five categories: download and upload speeds, quality, value and promise, or how close customers get to the speeds they’re promised. How does Canada do?

Downloads: Canada ranks below the EU, OECD and G8 and slightly above APEC. With an average speed of 13.78 megabits per second, Canada isn’t too much better than “third-world” countries such as Kazakhstan (10.95 Mbps – very nice!) and Rwanda (8.59). A few “first-world” countries rank lower than Canada, including Austria, France, Australia, Spain, New Zealand, Ireland, Israel and those poor, poor Italians (only 5.45 Mbps!).

Uploads: This is a particularly bad spot for Canada, which ranks below the averages of the EU, OECD, G8 and APEC. The Canadian average of 2.23 Mbps (which is similar in Germany and Ireland) puts the country on par with Tanzania, Chile and Nigeria. If the third-world charge can stick anywhere, it’s in uploads. Here’s a fun chartto look at.

Quality: In the ping test, which generally measures the distance between users and the Internet provider’s central server, Canada ranks 35th out of 54 listed countries, which again places the country below the averages of the EU, OECD, G8 and APEC. Canadian quality is close to Bulgaria and South Africa.

Value: In cost per megabit per second, Canada again ranks below the averages of the EU, OECD and G8, although better than APEC. First-world countries that are more expensive include Ireland, Italy, France, Australia and New Zealand.

Promise: Lo, a bright spot! In actually delivering the speeds they promise to customers, Canadian ISPs do better than the averages of the EU, OECD, G8 and APEC. Isn’t it astonishing, then, that this is the one aspect of Internet service in Canada that the CRTC has chosen to investigate?

So, to recap, Canada ranks below most of the developed world in download and upload speeds, prices and quality. In most cases it’s not third-world service, but judging by Ookla’s numbers, it’s fair to say that many third-world countries are within shooting distance.

What about that key measure that really gets Netflix’s goat: data caps? Ookla doesn’t measure those, but the OECD does. According to the Paris-based think tank’s latest figures (see table 5i), there are only five countries in the 34-member organization where the majority of Internet plans have caps: Australia, Iceland, New Zealand, Canada and Turkey. The first four are especially egregious, with more than 85 per cent of available plans featuring explicit usage caps. Twenty-three members either have no explicit data caps or the number of available plans that do number in the single-digit percentages.

Believe it or not, that result is actually an improvement from the last time I looked at these particular OECD numbers. At that time, the percentage of Canadian plans without data caps was zero. Since then, the OECD has likely started to count the small ISPs who do indeed offer unlimited downloading. Even still, if Martians were to judge Canada’s land mass judging by these data cap figures, they could be forgiven for mistaking the country for an island, like Australia, Iceland and New Zealand. Who knows what’s up with the Turks?

There’s little doubt it: Canada is out of step with the rest of the developed world in terms of data caps (it is worth nothing, however, that the situation is much better in Western Canada, where caps are considerably higher than in central and eastern Canada). Put that together with the other numbers from Ookla and you begin to get a feel for where Netflix’s Sarandos was coming from. His hyperbole was certainly over the top, but in the end it’s this sort of public international shaming that might finally spur some action from government and regulators.

At the very least, it might provoke some more ISP-sponsored reports that try to disprove what all the other data show. At least our consultants and lobbyists will never lack for work.