I had a few days to be a tourist on my trip to Berlin last week and one of the more fun things I did was visit the DDR Museum, which provides visitors with an excellent documentation of what life was like in communist East Germany before the Wall fell in 1989.

The museum has exhibits detailing the obvious stuff, like shortages of everything from toilet paper to gasoline, as well as the spying efforts of the Stasi secret police. It also sheds light on some of the really dumb ideas, such as requiring school children to take communal potty breaks. The kids would all go take a dump together and could not pull up their pants until everyone had finished.

And to think that Soviet communism eventually collapsed. Who’da thunk?

One exhibit – on music and culture in general – really grabbed my attention. I snapped a picture of the text explaining the rules that radio stations had to adhere to. Give it a read: 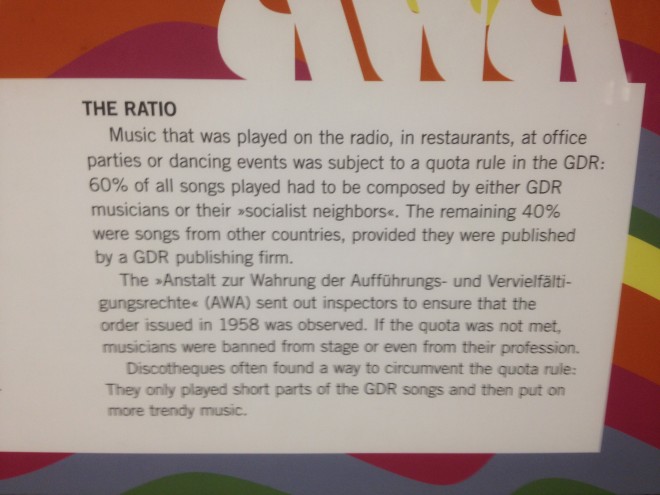 Hmm. Where have we seen this before? Oh yes… with a few variations, it’s also Canada’s current music policy. Who’da thunk?