Trying to lie to your insurance company? Your car will betray you. 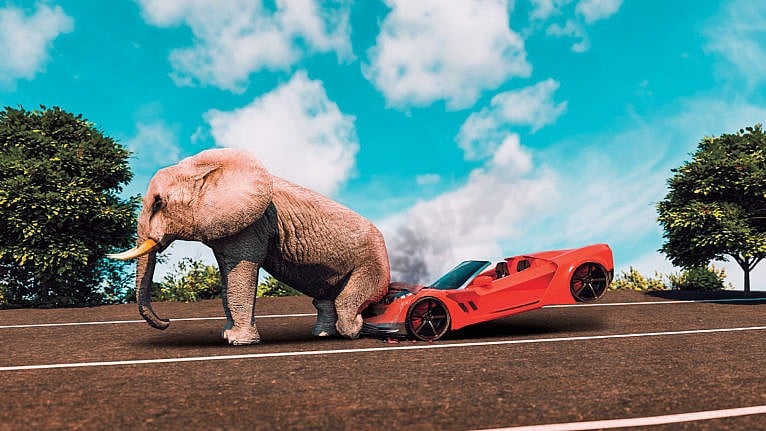 The story began with a 20-year-old Manitoban saying he’d fallen asleep at the wheel in a newer model Chevy Silverado, veering off the road and crashing into a few parked cars. Fortunately, he told investigators, he’d been travelling only five km/h over the limit in a 50 km/h zone; any faster and the damage might have been much worse.

But as Manitoba Public Insurance (MPI) looked closer at his claim, the extent of the damage appeared excessive for a vehicle barely travelling over the speed limit. So the insurer’s technical team examined information stored in the pickup truck’s “event data recorder”—a crash-resistant device sufficiently akin to an airplane’s flight recorder that it is known by the same name: the “black box.”

“The recorder confirmed the speed of the vehicle, which contradicted what the driver told us,” says Brian Smiley, a spokesperson for MPI. In fact, at the moment of the crash, the vehicle had been travelling 140 km/h. The brakes were never applied. The seat belts were unbuckled.

As for the young man’s insurance claim? Denied. Manitoba’s Crown-owned insurance corporation saved $150,000, thanks in large part to technology that debunks the fabricated stories motorists tell in an attempt to get away with fraud.

MORE: Formula E—the all-electric circuit race—is back and quiet as ever

After decades of poring over skid marks and scorched brake motors, insurance sleuths have entered a brave new era of claims investigation, harnessing the explosion of digital technology both inside and outside modern vehicles. Even basic car models are now equipped with computer-­driven components and accessories, the Big Brother implications of which are not fully known to drivers. For insurers, that’s a boon. A key fob alone may contain a computer chip that holds information such as a vehicle’s VIN number, when it was last driven and car mileage. Slick new infotainment systems record information on users’ calls, messages and recent locations, which can help investigators determine whether a claimant was, say, texting moments before a crash. Or, for that matter, whether they were the person driving.

“Sometimes we have phone calls from two parties that are involved in the same staged crash, because they’re coordinating and scheduling where it is they’re going to set it up,” says Sam Kodsi, president of Kodsi Forensic Engineering. While a fender-bender might have a relatively small payout for repairs, Kodsi says, that successful claim may open the door to bogus—and more costly—bodily injury claims.

Tech alone, though, won’t allow investigators to keep up with a growing problem that, according to a 2018 report from insurance company Aviva, adds $2 billion a year to Canadians’ premiums. In a 2017 Ipsos survey of Ontarians, nearly one in 10 respondents admitted to having previously engaged in auto insurance fraud, such as asking the auto body shop to do extra work on a car to be covered by insurance, lying about their address to get lower rates available in lower-risk postal codes, overinflating the value of items stolen from a car or outright staging an accident.

By comparison, dubious stories like the Manitoban pickup driver’s seem to be the last resort of the guilty and desperate. Last year, a Winnipeg woman unspooled an outlandish tale of thieves stealing her 2004 Chevy SUV, then messaging her through Facebook to demand a ransom for the vehicle. When she showed up to pay, the woman said, the criminals kidnapped her, then raced through the city streets for hours with her in the vehicle before crashing her SUV into another car.

RELATED: With ‘aerohaptics,’ holograms can feel real to the touch

It didn’t take long to suss out the lie. The woman told investigators she had both sets of keys for the vehicle when it was stolen from her garage. Trouble is, even her 18-year-old Chevy had an ignition and immobilizer system—an electronic security device that makes it impossible to drive the car without a key. “Once the truth is out, typically the registered owner will admit to it,” says MPI’s Smiley. In this case, the woman was actually out drinking with friends and speeding around town when the car crashed, and the group left the scene of the accident.

A bigger and growing problem for insurers is fraud orchestrated by practised operators, which is much harder to detect. Insurance crime has proliferated so much recently that industry players teamed up last year to create Équité Association, a not-for-profit anti-fraud organization that integrates the Insurance Bureau of Canada’s investigative services division with the Canadian National Insurance Crime Services, an anti-fraud data analytics organization.

“Our estimate is that auto crime is up 20 per cent each year for the past five years,” says Terri O’Brien, Équité’s CEO, who came over from the banking sector and believes fraud is migrating out of that industry due to technological safeguards. “When chip cards came into effect and got rid of credit card and skimming fraud, and when banks started clamping down on money laundering with capabilities for detection and prevention, that crime had to move somewhere. What I can see from our data analysis is that it’s moved quite squarely into the insurance industry. I look at it as commoditized money laundering.”

Using machine learning and artificial intelligence, Équité is building its own advanced analytics platform that will automatically alert participating insurers when it detects suspicious patterns, regardless of which insurer handles the claim.

“If you’re a big insurance company and you’re getting thousands of claims a day, there isn’t a human being looking at each claim,” says Gary Saarenvirta, founder and CEO of the AI-driven data analysis company Daisy Intelligence. He cites one case of an insurance company paying more than 80 bogus windshield claims to one person—one at a time, over the course of months—before catching on to the scheme. “Because a windshield claim is a couple hundred bucks, it wasn’t cost-effective to have an investigator look at it,” he says. “But when you add up $300 per windshield, it starts to become a significant number.” The use of AI, he later demonstrated to the insurance company, would easily have uncovered this fraud much sooner.

The trade-off, as with so much tech-driven efficiency, is privacy. The Équité system can detect behavioural patterns from data points we all leave in our wakes—such as shared IP addresses, cellphone numbers, networks of known associates—all of which might connect them to known fraudsters.

It’s a long way from the days of measuring crash zones and canvassing for witnesses. But investigators are quick to point out that the old methods involving physical evidence and testimony are still vital to their work. And if the tall tale of the sleepy Manitoban in his Silverado is any guide, decades-old technology can play a part, too. In that case, good old surveillance footage from a traffic CCTV camera showed that, moments before the crash, the driver had been racing another car.

This article appears in print in the March 2022 issue of Maclean’s magazine with the headline, “Tattletales on wheels.” Subscribe to the monthly print magazine here.