Please welcome Luke Simcoe to the blog. He’ll be contributing the occasional guest post on the Internet and the various kooks and cranks who inhabit it. 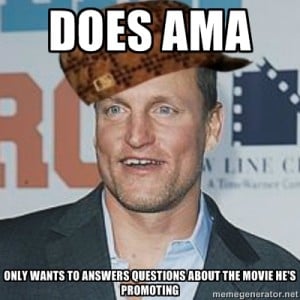 As part of the press junket for the upcoming Rampart, Harrelson participated in one of the social news site’s popular “Ask Me Anything” (AMA) threads. Almost immediately, one user asked the former Cheers star about a time he supposedly crashed a high school prom and slept with a female student:

“I swear this is a true story. I went to a high school in LA and you crashed our prom after party (Universal Hilton). You ended up taking the virginity of a girl named Roseanna. You didn’t call her afterwards. She cried a lot. Do you remember any of this and can confirm or have you been so knee deep in hollywood pooty for so long that this qualifies as a mere blip?”

Harrelson denied the allegation, but things only got worse from there, as he refused to answer questions that didn’t pertain to the film and left the conversation shortly thereafter.

Redditors were quick to denounce the affair as an “epic fail by Woody Harrelson’s PR machine” and the “worst AMA of all time.” Perhaps more poignantly, others declared that while they initially planned on seeing Rampart, they were now going to boycott the film.

The backlash didn’t end there. Both Harrelson and Rampart have become running jokes on Reddit and a bevy of memes mocking the event have proliferated throughout the web. One Redditor even submitted an entry for “rampart” to UrbanDictionary.com, defined as “to have sex with and then never call again.”

While it’s easy to suggest that Harrelson’s foray was derailed by an uncouth question and/or an Internet troll, the truth is that the AMA was over before it began. Other celebrities, including Ali Larter, Zach Braff and comedian Louis C.K., have conducted successful pow-wows with the Reddit community, but they did so by demonstrating an understanding of Reddit’s norms and aiming for sustained, earnest interaction with users. In contrast, Harrelson’s paltry 15 minute time window and “Ask-Me-Anything… as long as it’s about Rampart” attitude flouted the spirit of AMAs and exposed the whole thing as a marketing ploy.

The fact that Harrelson’s debacle occurred less than 48 hours after Facebook’s IPO makes it all the more interesting. While Mark Zuckerberg and company were touting “social advertising” as the wave of the future, Harrelson experienced the flipside of the phenomenon. As advertising moves away from the broadcast model and into more “social” spaces, advertisers and companies will have to contend with people talking back to them. The moral of Harrelson’s “epic fail” is that those willing to risk the uncertainty of social marketing would be wise to familiarize themselves with the norms of online communities and behave accordingly.

In Internet parlance, they’re going to have to learn to “lurk moar.”