They're the Silicon Valley breed recognizable from their hoodies, energy drinks, and eight-figure sums in their bank accounts. 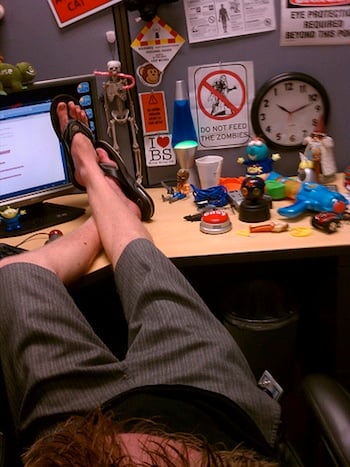 The first time I visited Silicon Valley, I met up with a very young Internet millionaire from Toronto who was on his third or fourth startup, I can’t remember.  He kept a condo back home and one in San Francisco, two of the most overheated real estate markets in the world. In high school he had been a geek, but now here he was, living the dream. So what did the dream look like?

Well, his West Coast condo looked like a dorm. It was sparsely furnished with bare-bones Ikea, his fridge was dirty and empty, and nary a poster hung on the wall. An intern slept on his couch, every night. There was, of course, an XBox. On an elevator ride down, we ran into his neighbour–another young dude wearing a hoodie, a baseball cap and a backpack. I was soon informed that this individual had just “exited” his startup for an eight figure sum. I met many guys like this in Silicon Valley. They worked 80 hour weeks together and then went out together for greasy food. They lived with each other and gamed with each other. It was hard to tell the millionaires from the interns. Some told me of girlfriends, but I didn’t meet any. I didn’t know it at the time, but these guys were Brogrammers.

Brogrammers, it seems, are a new breed of techies who pound energy drinks, crush code, and pull chicks. Brogrammer culture gets a close look this week from Mother Jones, where it is held accountable for its icky sexism. Fair enough. But I’m not sure how seriously we should take the fratty posture of the Brogrammers. Let’s remember: these aren’t actually womanizing louts. They’re geeks, pretending.

Everything and nothing has changed in computing. Programmers have never had more cache. The high school computer whiz now has more hopes resting on his shoulders than a star athlete. But the guys who discover a high aptitude for writing code are still the same guys who have trouble engaging in a face to face conversation. And yes, they are still guys. From the Mother Jones piece:

“According to a Bureau of Labor Statistics study, in 2011 just 20 percent of all programmers were women. A smaller percentage of women are earning undergraduate computer science degrees today than they did in 1985, according to the National Center for Women in Technology, and between 2000 and 2011 the percentage of women in the computing workforce dropped 8 percent, while men’s share increased by 16 percent. Only 6 percent of VC-backed tech startups in 2010 were headed by women.”

The startup scene is a sausage party. Women are often parachuted into companies to act as social co-ordinators, single-handedly tasked with creating a fun office culture, coaxing the bros from their shells and out to mixers. Inevitably, some of these workplaces have taken on some Maxim-mag style bravado, and to the extent that it excludes and alienates women, it should not be tolerated. But the real problem is not the juvenile humour of a few juvenile guys who have about as much exposure to women as your average Alaskan oil rig worker. It’s the unsettling absence of women from one of the most important professions in society.