Need an unregistered gun? There’s an app for that.

3D printing has a dark side 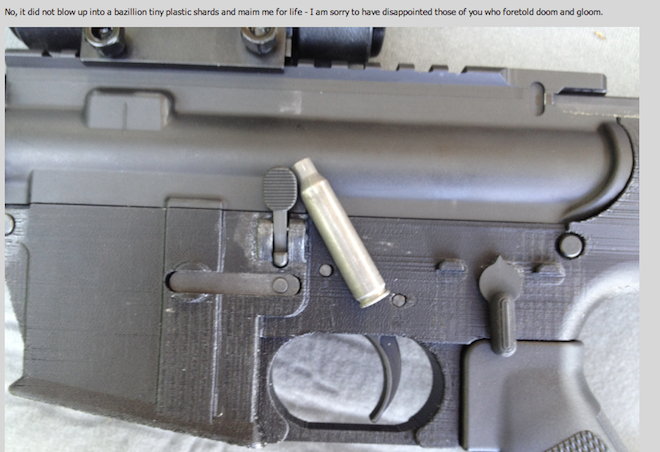 Last month, someone on the AR15 firearms message board boasted that they used a 3D printer to create a working .22 calibre gun. “It’s had over 200 rounds through it so far and runs great,” they wrote. Known as HaveBlue, the user claimed the gun was printed in plastic and cost a mere $100 in materials to manufacture.

“To the best of my knowledge, this is the world’s first 3D printed firearm to actually be tested, but I have a hard time believing that it really is the first,” they added.

3D printing, also known as “additive manufacturing,” is a term for building objects by laying down successive layers of material. A 3D printer starts with the bottom layer, waits for it to dry or solidify, and then works its way up. The process can vary depending on the printer and the material; most 3D printers work with things like plaster, polymer or resin, but some can even make things out of metal.

*If you haven’t watched a 3D printer video yet, watch this one:

To date, 3D printing has been used mainly in industrial circles for rapid prototyping, and speculation about its future capabilities has been confined to the pages of science fiction. For example, Cory Doctorow’s Makers imagines a world where 3D printers are used to run off everything from amusement park rides to shelters for the homeless. Charles Stross’ Rule 34 (an allusion to an Internet maxim which states “if it exists, there is porn of it”) paints a more ominous picture, wherein online spam becomes corporeal. In one scene, an unsuspecting netizen comes home to find a computer virus has caused his printer to start manufacturing sex toys.

However, recent advances in technology, coupled with a corresponding drop in prices, have made 3D printers more accessible. MakerBot’s Replicator retails for $1,750 and a recent Kickstarter is hoping to produce a 3D printer that could sell for as low as $1,200.

Ubiquitous 3D printing would certainly has its upsides:Freedom from corporate manufacturers and excessive intellectual property regimes, easily customizable, and repairable and recyclable products to name a few. However, there’s a fairly obvious downside. After all, the Second Amendment-loving members of the AR15 community celebrated HaveBlue’s alleged creation as an end to state oversight on guns.

And the dark side of 3D printing isn’t just limited to the potential for the unchecked manufacturing of firearms. A team of scientists in the U.K. has reportedly used a similar device to synthesize chemical compounds. “We’re extrapolating from that to say that in the future you could buy common chemicals, slot them into something that 3D prints, just press a button to mix the ingredients and filter them through the architecture and at the bottom you would get out your prescription drug,” a researcher associated with the project told the BBC.

And of course, if one can use 3D-printing to produce legal drugs, one can also use it to synthesize the illegal kind. I imagine the plot of Breaking Bad would be a lot different if everything one needed to start a meth lab was available at your local electronics store.

3D printers also open up new avenues for counterfeiting and material piracy. Always on the lookout for the next thing to copy and share, the Pirate Bay, for example, has already endorsed 3D printing plans, or what they refer to as “physibles.” Who knows, in a few years the Internet adage, “you wouldn’t download a car,” may no longer hold true.

It bears mentioning that most commercial 3D printers are still a long way from being portable gun and drug labs, and many of the people working on them are making sure it stays that way. But technology only moves in one direction, and we’ll have to confront these issues eventually. As usual, the trick will be to do so in a way that maximizes the benefit of the new and minimizes its risk.

The last thing we need is for the next Byron Sonne to spend a year in jail simply because the cops found a 3D printer in his basement.