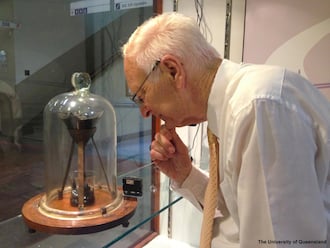 John Mainstone, a physics professor who oversaw the world’s longest-running scientific experiment, has died at the age of 78.

The experiment for which Mainstone was the custodian is called the Pitch Drop Experiment and it is still being conducted at the University of Queensland in Australia. The experiment began under Professor Thomas Parnell in 1927 and it was designed to test the viscosity of pitch, a tar that was once used to waterproof boats.

Parnell set to prove that, although pitch appears to be solid at room temperature, it is actually a liquid. He heated some pitch to a liquid state, poured it into a funnel and waited for it to create a droplet. He got his droplet three years later and, since 1927, the university reports there have been eight drops of pitch in total.

No one, not even Mainstone, has ever seen one of the drops fall, but this could change. The pitch now has a camera focused on it. And there is a ninth drop formed right now, but it has yet to fall. You could be the one to see it!

NPR’s Radio Lab interviewed Mainstone about his work with the Pitch Drop Experiment for an episode on speed in February. That episode, and the interview, is here.

In the interview, Mainstone recalls just missing the drop in 1988. “I decided I needed a cup of tea, or something like that, walked away. I came back and, lo and behold, it had dropped.”

“One becomes a bit philosophical about this and I just thought, oh well, let’s be patient.”

Mainstone was the former head of the physics department at the University of Queensland. He had retired, but remained the “custodian” for the experiment, which he oversaw for a total of 52 years.

“Professor Mainstone’s dedication to the long-running experiment well past his official retirement ensured that media, researchers and undergraduate students had easy access to relevant information and an understanding of the important science behind it,” Professor Halina Rubinsztein-Dunlop, head of the school of mathematics and physics said in a statement. “John will be greatly missed around the halls of the Parnell Building at UQ where he maintained an office and a close connection with UQ until his death last week.”

Mainstone died on Aug. 23 after having a stoke.