Scientists are closing in on dark matter

New research on one of science's enduring mysteries 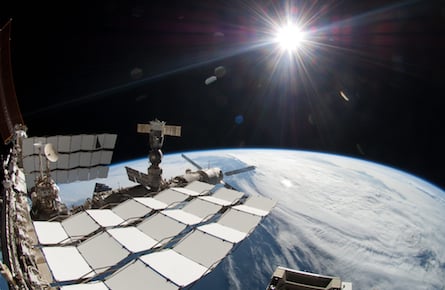 The first results from a particle physics detector aboard the International Space Station are in—and show tantalizing hints of dark matter, a mysterious substance that binds the galaxies together.

New research from the $2-billion Alpha Magnetic Spectrometer (AMS), revealed today by Nobel laureate Samuel Ting, confirm an excess of positrons (the antimatter counterpart to an electron) that could very well be a sign of dark matter particles annihilating each other in space. Then again, maybe these signals are just some cosmic debris, although scientists are cautiously excited.

“Over the coming months, AMS will be able to tell us conclusively whether these positrons are a signal for dark matter, or whether they have some other origin,” Ting said in a statement.

Since it launched to the Space Station in 2011, the AMS has recorded about 25 billion cosmic ray signals, including the largest collection of energetic antimatter particles ever measured from space. Scientists predict that collisions of dark matter particles produce positrons and electrons, which is why the ratio of these tiny particles is so interesting to dark matter hunters, Ting included. But we still don’t know for sure if the positrons AMS has found are from dark matter, or  something more mundane, like pulsars. What the AMS has found “is an indication, but by no means is it a proof” of dark matter, Ting told New Scientist earlier today from a seminar at CERN, near Geneva, from where he presented his results.

Still, an indication is exciting enough. Ting’s results had been hotly anticipated for months, and in February he teased reporters with a promise that news was coming soon. “The Cosmos is the ultimate lab,” he said then. While scientists on the ground continue the hunt for dark matter—at CERN’s Large Hadron Collider, for example, and at SNOLAB, deep underground in Sudbury, Ont.—this massive orbital experiment, which continues until the Space Station is decommissioned in 2020, looks to be quickly closing in on one of the enduring mysteries of science. Dark matter makes up about a quarter of our universe, yet we know almost nothing about it; many predict we’ll have found dark matter within the next ten years. Maybe sooner.