How selfie-stick bans reveal a relevance crisis for art institutions

Music festivals, museums and galleries have been instituting bans of selfie sticks. That's actually a good thing—for people who love a good selfie. 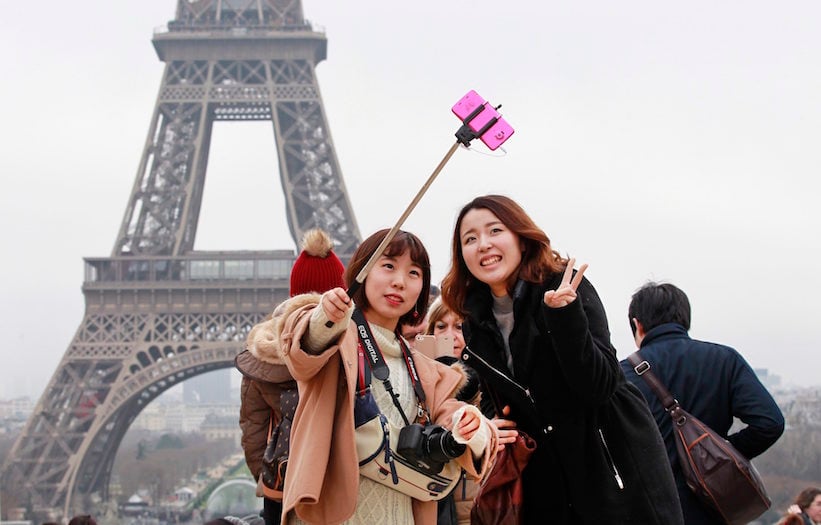 The selfie remains a polarizing social curio. Baffling to those of a certain age, and second nature to those of another, the selfie has proven to be one of the more divisive wedge issues of our time: Is it an act of untrammelled vanity? Or is it, as Wayne Fromm, the Canadian inventor of the selfie stick told Maclean’s in an interview, “just human nature,” the newest way to engage with the “archiving our life”?

Two significant and wildly different kinds of art events have come down on the trend—but it’s not along the expected lines. Music festivals, which usually teem with the kind of young people who would approve of the sticks, have been announcing bans of them in recent days, according to the Associated Press. Coachella and Lollapalooza have dismissed them as “narcissistics” on their prohibited items list, though they insist that it’s for “safety reasons” and to avoid “obstructions”. Ultra, the largest electronic dance music festival in the world, comes down a little more honestly, stating that “they will be turned away and we’ll probably make fun of you.”

On the other hand, museums and art galleries, so often seen as the land of the stodgy and haughty, have a more complicated relationship with them. Some have banned them—including Britain’s National Gallery in London, New York’s the Metropolitan Museum of Art, the Hirshhorn Museum and Sculpture Garden in Washington—citing the understandable dangers of wielding long sticks near priceless artifacts.

But other major institutions, including the Louvre, the Tate Modern, and Toronto’s Royal Ontario Museum, continue to allow them. Some institutions are fully embracing museum selfies, from the Art Gallery of Ontario to the Guggenheim, by endorsing “Museum Selfie Day” on Jan. 20. And that’s not entirely unreasonable.

Related: A Q&A with the selfie stick’s unsung Canadian inventor

Art has been seeking ways to reach out to audiences that are engaging with culture in new ways. Critics like British blogger Michael Savage have opposed them because, as he told CBC News in London, “it becomes about the individual, it becomes about putting yourself into the picture.” But the ultimate job of the curator is to show how history and artists mattered then and continue to resonate now in our lives. Take, for instance, a memorable recent exhibit at the Art Gallery of Ontario that took on the career of Alex Colville, a painter whose influence and international fame was wilfully diminished by his decision to squirrel away in a small Nova Scotian town. But this exhibit was laid out in consumable, divisible chunks, splitting his work up into logical categories and replete with pop-culture touchstones inspired by his work. The exhibit that gave a meaningful sense of why this quiet, late Maritime painter mattered to a national, even international, audience today—that’s good curation. And if the ultimate point of engaging with the works in a museum or a gallery is, ultimately, to understand oneself and humanity better, is allowing people to take a selfie with them so beyond the realm of usefulness?

That said, the selfie stick has the feeling of an invention that is on the cusp of flaming out as brightly as it lit up. The reality is that the selfie stick solves a problem: we want to take selfies, but we want to be able to do it better. In fact, Fromm actually invented the stick itself before our culture got around to realizing our passion for selfies. That’s how the best inventions work: they disrupt something comfortable, or provide a salve for a want you didn’t know you had.

Except even the best, most widespread technology becomes quickly outmoded by others looking to improve on it. The USB stick was once ubiquitous and fulfilled a dramatic need—that is, until cloud storage solved that. Scanners used to be integral, the kind of useful equipment that’s an office requisite—but now, for 99 cents, you can download an app that lets you scan with your cell phone. Also, calculator watches used to be a great idea.

It seems likely that the bans will lead to the wane of the device, to be looked upon as ancient artifact in just a few short years. The selfie stick is, after all, just a telescoping pole: there will be better solutions. And these prohibitions have provided just the kind of challenge that good inventors salivate over—there’s a new need that’s there for the taking. In fact, Fromm says he’s already working on such a device.