What will the Internet look like when 6 billion people can connect to it? 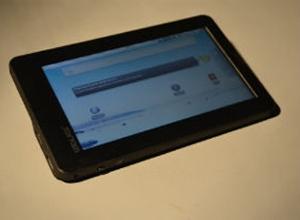 The Aakash is a pretty crappy tablet computer.  Made in India, the Android gadget’s touchscreen is small, with no multitouch functionality. Its battery only lasts for a few hours, its processor is fairly slow, it has no camera, and though it has WiFi, you’ll need a USB dongle to connect to the mobile Internet when away from wireless broadband. Compared to the iPad, the Aakash is a piece of junk—except for the one stat where it blows Apple completely out of the water: price.

The Aakash costs $37.98 to manufacture. Ten thousand units are currently in the hands of Indian students. Thanks to a government subsidy, they cost $30 each. A retail version of the Aakash is expected soon, with 90,000 units shipping to Indian stores bearing a sticker price of $50 to $60. There’s no word on a North American release just yet.

Here’s a short video report on the Aakash from NDTV:

This is a pretty big deal.

The early promise of the tablet computer—a “magical” device that would transform society (and maybe save the publishing industry) remains unrealized. By selling around 25 million iPads, Apple may have realized its shareholders’ dreams, but the greater dream—that the tablet computer would “change the world“—is still just a dream.

The Aakash could change that.  Or rather, it could be the start of that change. By proving that a $50 tablet is possible, the device sets a new standard in affordable access. And affordability is the killer app, at least when it comes to global transformation.

Twenty-five million iPad owners sounds like a lot, until you consider that there are 5 billion active cell phone subscriptions in the world. Cell phones, unlike tablets, laptops, and smartphones, have become so cheap that they are owned by even the poorest people on the planet. But the technological limitation of these devices means that most subscribers are chatting and texting on a one-to-one basis. By contrast, there are around 2 billion people who can communicate through the Internet.

The Aakash, and the dozens of dirt-cheap Android tablets that will follow it, will do much to connect the remaining billions. Imagine the rate of online innovation when the Internet’s population triples? Imagine the impact on the written word when the market cap on tablet readers explodes from 25 million to a billion or more?

Now that would be magical.