In the near future, we’ll be sharing the streets with driverless vehicles. Here’s what to expect when self-driving cars hit the road. 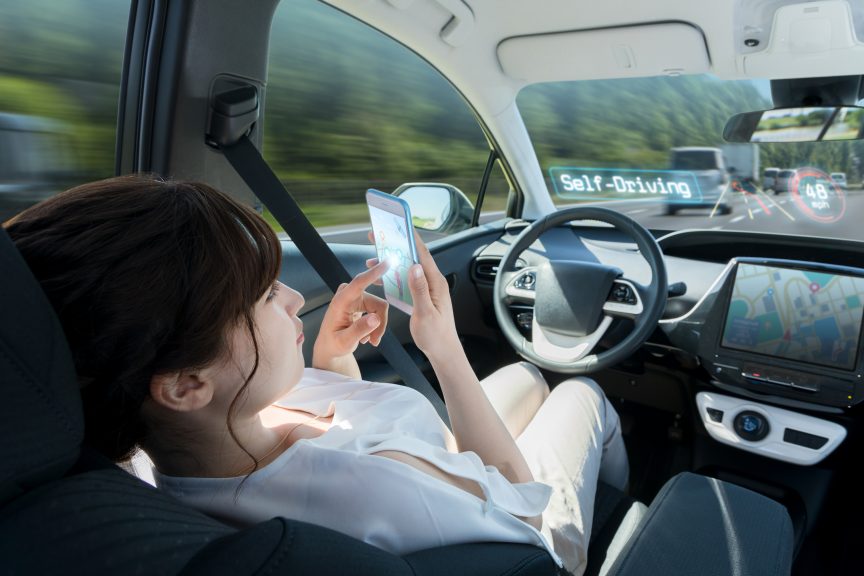 Why would we want self-driving cars?

Traffic fatalities claim more than a million lives a year around the world; that’s 36,000 deaths a year in the United States, and 2,000 a year in Canada. This public-safety crisis—that is mainly caused by driver error—has largely been overlooked, considered a necessary trade-off in our commuting economy. But with the development of advanced sensor technologies (e.g., cameras, radar, and laser-driven lidar), and perception systems guided by big data, artificial intelligence and increasing processing power, we are fast approaching the day when self-driving vehicles can do a better job than human drivers.

Economically, consumers and businesses alike can expect to save money with autonomous transportation. Currently, paying the driver accounts for about half the cost of taking a cab (or Uber). And trucking companies today are already struggling to find enough drivers—a shortage that’s only expected to get worse in years to come.

What does the future of autonomous vehicles look like?

Nobody is entirely sure how this landscape will develop. As the new technologies prove out, some cities may pivot to driverless vehicles exclusively, while others may designate separate lanes for manually driven cars. It remains unclear whether that future will mainly involve privately owned vehicles, public systems providing a mix of individual vehicles and bigger, pooled “pods,” or a broader mix of options and providers.

Future vehicle fleets will be electrically powered, which could result in cleaner cities. But if private ownership prevails, there could be more cars on the road than ever. (City planners have nightmares about drivers setting their autonomous vehicles to cruise the streets empty rather than pay for parking.) On the other hand, if driverless vehicles become part of an integrated transit system that includes bicycle paths, motor scooters, and improved public transit, we could see a renewed greening of cities where less space is required for roads and parking.

Automating the world’s motor vehicle fleets will be one of the century’s biggest business opportunities, so it’s no surprise that the leaders are commercial giants investing billions: carmakers such as Ford, Daimler, Toyota and General Motors/Honda, new mobility companies such as Uber and China’s Didi Chuxing, and technology leaders such as Google, Intel, and LG. Their work is further enhanced by hundreds of start-ups and academics. Researchers at the University of Waterloo last year debuted Canada’s first driverless vehicle, the Autonomoose, featuring leading edge detection and reaction systems that were immediately adopted by commercial competitors.

Where are we now with current self-driving car technology?

The transition has already begun. Automakers are racing to offer advanced driver-assistance systems; these safety features and warning systems represent a major leap into semi-automated cars. Such offerings include adaptive cruise control, collision avoidance, and lane-departure warning systems. Spinoffs from this research will also benefit other industries, including robotics and aviation – and yes, that includes flying cars.

Can I insure an autonomous vehicle?

Insurance costs are likely to fall as new driver-assistance technologies reduce the number of accidents, although overall savings may be offset by the higher cost of repairing cars with automated systems. In the long term, automobile insurance will transform as responsibility for accidents shifts from drivers to the manufacturers and service providers that supply automated fleets. The insurance industry is just beginning to explore how liability will be shared in semi-automated vehicles, and how operating data from autonomous vehicles—vital to understand how accidents happen—will be collected.

Should we trust autonomous vehicles?

One recent survey found 46% of consumers don’t trust self-driving vehicles—and that’s understandable. It will take time for these new technologies to earn public trust. The experts also recommend that consumers and governments keep a close eye on the industry giants pushing this forward, to ensure they focus on issues such as safety, privacy and data-sharing.

But at the very least, you may not need to worry about whether self-driving vehicles can handle extreme weather conditions. University of Waterloo researchers are already collecting data on winter driving conditions in Canada and developing protocols for autonomous cars. With their advanced sensors, one robotics expert claims that these vehicles are better at detecting black ice than the human eye.

When will self-driving cars be available? What if I still want to drive?

Relax. It’s unlikely that any adults driving today will ever be forced to take their foot off the pedal. While self-driving cars (usually monitored by “safety drivers”) are already sharing city streets as part of testing programs, the experts predict it will be 40 or 50 years before autonomous vehicles fully displace manual ones. Even then, there will likely still be roles for manual vehicles, particularly in rural areas, or in specific industries like construction or agriculture.

University of Waterloo academics Michal Antkiewicz and Krzysztof Czarnecki, and Steven Waslander of the University of Toronto, were consulted for this story.