Silicon Valley is promising a digital world within our world. But logging in to the metaverse won't solve our issues. 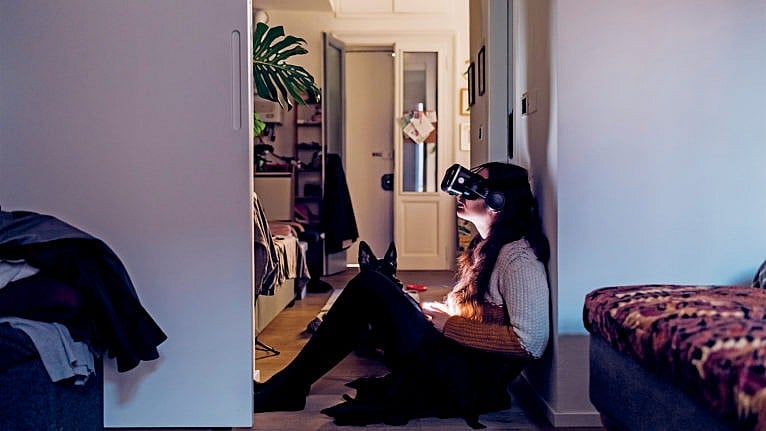 If our technological overlords get it right, the future will be beautiful. Picture a young man living in a home as lovely as any he can imagine; the furnishings are modern and his windows overlook scenes of tropical waterfalls and the ocean perpetually at sunset. Every item he could wish to collect lines the walls of this space, and he can indulge every passion. He can call his friends to join him any time, and every movie, artwork, video game, television show or book ever produced is instantly available.

He needs to leave this space, this metaverse, only to sleep or eat or tend to other unavoidable physical needs. But when he removes his futuristic Oculus headset, he is suddenly reintegrated into a very different—physical—reality.

In the “real” world, he is just a guy sitting alone in a small, dirty apartment. The rented walls are unadorned. The mattress on which he sleeps is grubby and grey; his plastic furniture is broken and chipped; he is alone. And, truth be told, he is perfectly happy with this state of affairs. Why waste resources improving this crude sphere—known by the derisive label “meatspace”—when his other, virtual life is as perfect as human imagination allows?

MORE: Trying to lie to your insurance company? Your car will betray you.

If we listen to the likes of Meta, née Facebook, and other major technology companies, this is the Next Big Thing: an always-on virtual reality space that can intersect with the physical one—like an all-encompassing Pokemon Go. Wearing goggles or glasses, individuals will be able to work, play and socialize. We already have early versions of this technology in the form of video games like Second Life. The only advance, as recently announced by Meta, will be physical hardware that will allow us to tap into that digital world, seamlessly and constantly.

Even if Meta succeeds with its metaverse—and there is considerable skepticism that it will—the concept is both promising and unsettling. Remember that technology companies are essentially corporate futurists: to survive, they try to navigate the world to come. And the world they are betting on is, in fact, deeply dystopian.

Understanding why requires a brief detour into economics—specifically, the theories of Thomas Piketty, one of the most influential economists of our time. Piketty suggests that we’re heading into a period of economic stagnation fuelled by slowing population growth, in which wealth will increasingly be concentrated among the elite. This will have a brutal impact on class mobility; in low-growth environments, we retreat into hierarchical, feudalistic socioeconomic structures, where the rich get richer and the poor stay that way.

There’s a growing sense that Piketty’s predictions are playing out before our eyes, which might explain why a surprising subsection of the Silicon Valley set has begun championing a universal basic income (UBI). Something like a UBI can subsidize technological disruption, which is a nice way of saying it will keep the peasants in line when artificial intelligence and robots replace them in the workforce.

But in a society where social mobility is impossible for all but the most intelligent, it can also create a permanent underclass. In that scenario, the ruling elite must at least find a way for said underclass to stay happy. And here we see the real potential of the metaverse.

The term itself is believed to have originated in author Neal Stephenson’s 1992 book Snow Crash. With terrifying prescience, Stephenson predicted a parallel digital universe that looks very similar in principle to the metaverse heralded earlier this year.

The one in his novel is no utopia, but rather an escape from an anarcho-capitalist world run by corporations, franchises and the Mafia. The protagonist, wryly named Hiro Protagonist, is a hacker and former pizza delivery specialist. From the book: “When you live in a sh-thole, there’s always the Metaverse, and in the Metaverse, Hiro Protagonist is a warrior prince.”

RELATED: With ‘aerohaptics,’ holograms can feel real to the touch

That’s what the metaverse is: a way to expand the capitalist imperative of endless growth into a digital reality. That digital universe needs only the energy and parts required to generate more computing power. So our hypothetical future protagonist might live in a terrible apartment, unable to afford land and lacking either the incentive or means to marry or have kids. There is no path for him to find his life’s meaning in any of the traditional ways. He is surplus to society’s requirements.

But so what? In the metaverse, he can inhabit any body he likes, live in a mansion, drive whatever vehicles he wishes, and content himself with virtual sex almost as good as the real thing. The only thing that is required of him is to generate enough wealth to keep his physical body active and connected to the only world that will matter to him: his dreamscape.

This isn’t a particularly radical prophecy. Video games, social media and pornography already serve these functions, albeit in a less technologically sophisticated way. They channel the rage and desire and ordinarily sociable status-seeking of young people who might otherwise present a real threat to the existing social order from which they are increasingly excluded.

A 2016 World Economic Forum video uploaded to Facebook, which compiled predictions from various forecasters and economists, notoriously put it thus: “You will own nothing. And you will be happy.”

This article appears in print in the April 2022 issue of Maclean’s magazine with the headline, “It’s a wonderful meta-life.” Subscribe to the monthly print magazine here.