'The Virtual Self': CBC's Nora Young talks about her new book

Ever wondered why we share so much information about ourselves and what happens to it? 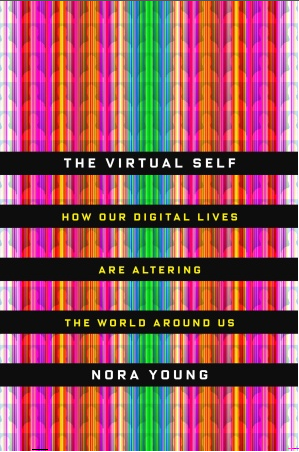 Nora Young, host of the CBC radio program Spark (which I sometimes contribute to), tackles all of these topics and more in her new book The Virtual Self: How Our Digital Lives Are Altering the World Around Us. It’s a great read that provides a good deal of food for thought in regards to why we engage in all this self-tracking, and what it all might mean as it develops further.

I had a long chat with Nora last week  about her book:

Q: What’s your back-of-the-book pitch? What’s it all about?

A: It’s really about the accumulation of what I’m calling the statistical minutiae of every-day life. I’m not talking about oversharing on Facebook, I’m talking about the way we’re starting to pump out enormous amounts of data about where we’re going, what we’re doing, how we’re reacting to the world around us, the pictures that we’re taking of all the stuff that we do in our daily life. That’s everything from wearing a Nike Plus when you do your runs to checking in on Foursquare to registering a status update on Facebook or Twitter or posting innumerable photos from your cellphone camera.

So it’s thinking about both why it is we’re doing this thing that’s sort of odd on a personal level, but also looking at, on a collective level, how this information can be used for beneficial ends and also what the red flags are as we go forward.

Q: You deal with a lot of topics on Spark. Why did you choose this one to write about?

A: It’s something I had observed at the fringes or more on the extremes. One of the people I talk to in the book is Nicholas Felton, who was on Spark very early on. He’s a guy who documents enormous amounts about his own life and publishes a report of this kind of statistical minutiae. I thought ‘that’s really interesting,’ but as I looked at him and other people like him – other life loggers and life cachers – I thought, ‘really, it’s just sort of the bleeding edge of what a lot of us are starting to do more and more because it’s so easy to do now.’

We carry these tools all the time, whether it’s our ebook or tablet computers or cellphones, so I started to think maybe we’re looking towards a near future where in some ways we’re all Nicholas Feltons, keeping this enormous amount of data. My initial reason for wanting to look at it was curiosity because it is a surprising thing, that we’re interested in tallying up this sort of thing. I was curious in the psychology and history behind that. It was only later once I started working on the book that the sort of bigger picture of aggregating this kind of information and what that might mean really occurred to me.

Q: You mention using a few online tracking tools, such as RescueTime. Were you using them before or did you get into them while working on the book?

A: Like most people, I’d experimented here and there with keeping track of things, like what I eat or wearing pedometers and things like that. I tried to do it mostly because I didn’t want to be judgmental or dismissive about these kinds of things without experiencing it myself and seeing how it played out in my own life. So I experimented with a few of them.

I have to say, as a person, detail is not my strong suit, so I found it difficult to continue with any real rigour in doing these things. My suspicion is that as we use more and more of these tools and as it becomes easier to do so, you won’t actually have to be particularly disciplined in order to use it. The service I was using, Datum.com, it’s still pretty analogue because you still have to think, ‘Okay, what am I going to track and let me remember to keep track of those things and so forth.’ As you look into the future, a lot more of that is going to be like RescueTime where all you have to do is the initial download of the software and then it tracks what you do without having to consciously do anything.

Q: So a lot of this tracking is going to become automated?

A: I think so. In some ways, that’s logical and helpful in the sense that it makes it easier to do, but in some ways I also think there’s a downside to it in that it takes away some of the consciousness to the process. One of the things I noticed is that in deciding what it is you want to track and then making the effort to actually do it, you bring a certain amount of thoughtfulness to the process than if it’s just being captured automatically. People have obviously done this for a long time – they’ve kept paper diaries for ages and books of their expenses or what they eat if they’re dieting or whatever – but digital has this quality of “knowing” how it’s being used. This is sort of a natural extension as we are using more and more apps on our phones and carry our tablets with us all the time. As more of our analog practices become digital, it’s kind of in the nature of digital that information can be recorded more easily.

Q: You talk about two kinds of self-tracking, with the first being the personal individual kind. Why do people do it?

A: There are a few answers to that. On the one hand, it’s just a very practical thing. People use it to motivate themselves or change behaviours. On the other hand, part of it is also a desire to create a narrative out of our lives. We don’t want to feel like our lives are just one damn thing after another, right? The ability to track these things and display them in a way that is accessible and attractive – so it’s not just that you have to use an Excel spreadsheet – for a lot of these things you can see a really nice graph, that helps us develop this feeling of wanting to have a narrative to our lives. People are generally interested in self understanding. Ours is an era that likes numbers and stats so in an earlier age you might have written things in a narrative sense, like in a diary, but now there’s a certain kind of confidence we get in our own era from having things displayed numerically. It’s just where we are as a culture right now. We love that kind of stuff.

Q: The second kind of tracking you write about is external, or the kind that companies and governments do. You deal with both the positives and the negatives – does one outweigh the other?

A: The main danger is obviously privacy. There has been some evidence that even when information is “anonymized,” researchers have had some success in de-anonymizing parts of supposedly anonymized data. My initial concern with this is that beyond the public policy discussions, in some ways we don’t even understand the math of this very well, or what keeps that data safe and anonymous. From the point of view of making our communities smarter and better, we don’t need to know what Pete Nowak or Nora Young are doing, we only need to know what people are doing. The question of privacy is obviously enormous.

Because it is this feature of digital information, where it goes from one context and is easily put into another, we often think about what information we put out there and are you being too public with the stuff you should be private about, but the character of being able to take information from one context and put it into another makes it very difficult for us to see sometimes what we should and shouldn’t be revealing.

For instance, there was that woman in Quebec whose insurance company investigated her on Facebook. I believe she was on disability leave for depression and her insurance company found photos of her smiling on the beach and raised questions about whether she was depressed. Who knows what the actual facts of the matter are, but regardless, there’s nothing particularly revealing or sinister or oversharing about having a picture of yourself smiling on a beach. For information to be taken from context and put into another, it does raise questions about what kind of purposes that information will be put to. Those are in some ways my primary concerns.

With opportunities, when you think about how much we’ve had to structure our cities, for instance, based on a lack of knowledge or a relatively static availability of knowledge like census data, if we can create essentially a live feedback map or loop between what’s happening in the flesh-and-blood world around us and how we track that digitally, the potential is to create much more responsive communities.

There’s one researcher at MIT, Sandy Pentland, who calls this “dynamic demographics,” which nicely gets at that sense of taking what was formally a static thing – that is demographics – and turning it into something that’s very responsive. There is quite a bit of research that’s being done into this kind of stuff at MIT, specifically around cellphones and the idea that if you know where they are you by extension know where people are, and what could you do if you figured out if the city could be considered more of an organic thing. I find that really fascinating and there have been some really good, early projects. We’re just at the very beginnings of seeing what you could potentially use that information for – how do you do it in a way that protects people’s privacy, and addressing other questions about the usefulness of the data? And at what point does data become statistically reliable? At what point does people’s self reporting on matters become reliable?

I certainly don’t claim to know the answers or that there are no problems associated with using the data, but I think it’s a really promising area of research.

FILED UNDER: CBC Spark data mining internet Nora Young privacy The Virtual Self: How Our Digital Lives Are Altering the World Around Us