The war between autonomous cars and pedestrians 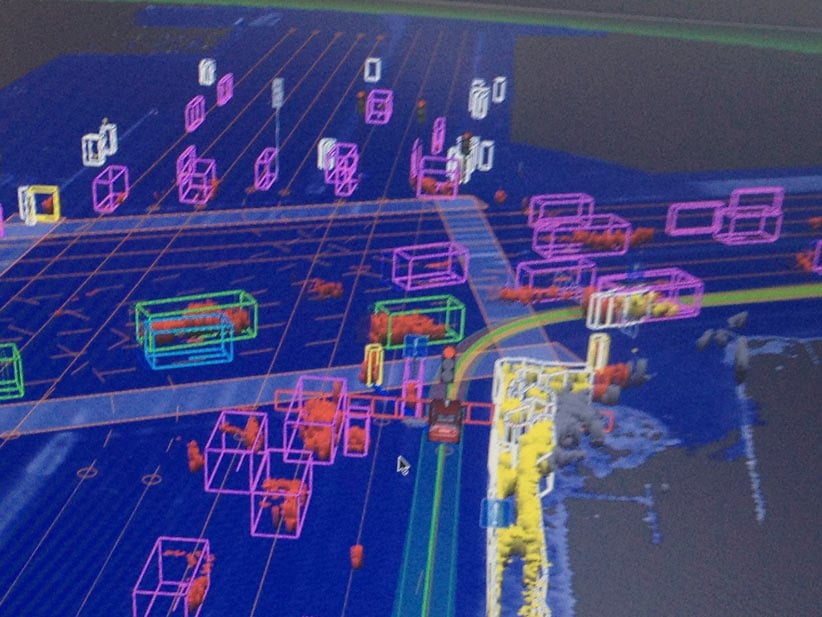 You’re standing at a street corner waiting to get to the other side of the road. Do you step out into traffic secure in the knowledge that cars are legally obliged to yield to pedestrians at crosswalks? Or do you wait until the coast is clear?

In other words, how lucky do you feel?

The game of crosswalk chicken is played on Canadian streets on a daily basis. And in the vast majority of cases, it’s the pedestrians who concede. The benefit of getting across the street in a hurry is generally outweighed by the very real possibility that some drivers are unlikely to stop to let you cross. The annual death toll of pedestrians who’ve gambled and lost (on average about 300 a year in Canada) stands as a sobering reminder of this game’s long odds.

Cars have ruled the road in North America since their appearance more than 100 years ago. Today only a fool steps into the road hoping drivers will stop. But perhaps crosswalk chicken is on the verge of a dramatic rule change. What if the incipient revolution in autonomous cars delivers more than a less-stressful drive? What if the prospect of robotic driving actually makes pedestrians (and cyclists) the new kings of the road? According to one American academic, the future of urban road traffic could end up looking a lot like our distant past.

“Most of the attention paid to autonomous vehicles right now is focused on the technology,” says Adam Millard-Ball, a professor of environmental studies at the University of California, Santa Cruz. “What’s missing is the question of how pedestrians and other road users will respond to this technology.” Using the concepts of game theory, Millard-Ball recently sketched out a fascinating, and rather convincing, version of the future of urban traffic in a recent issue of the academic publication Journal of Planning Education and Research. He suggests pedestrians and cyclists are about to stage a dramatic urban coup: wresting control over the roadway from cars in the wake of the autonomous vehicles revolution.

A crucial, and perhaps overlooked, aspect of the future of autonomous cars is that they will necessarily be programmed to obey all traffic ordinances and rights-of-way. While the finer points of law and technology are still being worked out, autonomous vehicles will behave much more respectfully towards other road users than the human-controlled vehicles of today.

“There are huge incentives for auto makers to produce autonomous vehicles that will err on the side of caution because of the massive liability issues they will face,” says Millard-Ball in an interview. Evidence that an autonomous car failed to see a pedestrian, or saw and still hit that person, will create enormous legal problems for the industry. Already some manufacturers, including Volvo and Google, have said they will voluntarily assume liability for any collisions involving their vehicles.

To meet this pledge, autonomous cars will have to be designed and controlled in such a way as to avoid any and all contact with defenceless pedestrians and cyclists. We can thus expect computer-controlled vehicles to stop or swerve whenever necessary; and with much greater precision and quickness than is currently the case with human drivers.

If such a scenario comes to pass, says Millard-Ball, “it will change the calculus of pedestrians and could dramatically alter how all urban roads operate.” Consider again the game of crosswalk chicken, but on a road filled entirely with autonomous vehicles. Pedestrians now know that whenever they decide to step off the sidewalk at an intersection, all cars will instantly come to a stop since they’ll be programmed to recognize and respond to pedestrians’ right-of-way. Walkers will also know that whenever they find themselves in the middle of the road—whether they have the right-of-way or not—cars will do whatever it takes to avoid hitting them.

Over time, pedestrians will exploit this new roadway dynamic to their benefit. They will be able to dart across the road at any time and anywhere, confident that traffic will part for them as the Red Sea parted for Moses—as if by divine intervention. “Wandering across the street is likely to happen a lot more,” says Millard-Ball, who promises some other big changes. “We could also see residential streets be turned into social spaces. Parents might even become more comfortably letting their kids play on the street because they know autonomous vehicles will always stop for them.”

The same potential future holds for cyclists as well. “If you know cars are not going to hit you, then you can be much more assertive in taking the whole lane rather than riding in the gutter,” says Millard-Ball. “Cycling will become safer, more comfortable and more popular on a road filled with autonomous vehicles.”

RELATED: Why Canadians are wary of self-driving cars

The result of all this, from the perspective of autonomous car passengers, will be chaos and frustration. Having being promised a robotic controlled future that makes “driving” much more pleasurable and efficient, the likely outcome now seems rather different. With pedestrians traipsing across streets whenever the mood hits them, and bikes dictating road speed without fear of repercussion or injury, cross-town travel will become an endless series of stops, starts, swerves and delays. Cars will no longer intimidate other road users.

“On urban streets, it is not clear to me that autonomous cars will be any faster than cars are today. In fact, I suspect they could be much slower,” says Millard-Ball. While autonomous cars and trucks may realize their vast potential for efficiency and speed on highways, where pedestrians and cyclists are forbidden, this seems unlikely on urban and residential streets.

Nothing about the future is ever certain, of course. But if this pedestrian-dominant scenario does come to pass, the future could end up looking a lot like our sepia-toned past.

When the car revolution first struck in the early 1900s, much more than just traffic speeds were affected. During the previous era of horse-drawn urban travel, streets were places for commerce, socialization and play. Vendors would sell their wares on the road. It’s also where children would play and neighbours would meet and gossip. Any danger of being hit while standing in the roadway was modest, since horses were noisy and relatively slow moving—plus they had the added benefit of being “preprogrammed” to avoid collision.

The appearance of cars, which moved much faster and at the whim of often-irrational human drivers, turned these traditional road uses into a bloodbath. The death toll, particularly among children, was enormous. In 1925 alone, 7,000 kids were killed by cars and trucks across the United States. Some U.S. cities erected war memorial-style monuments in memory of juvenile traffic fatalities. In Ontario, 1927 saw 387 traffic deaths, mostly pedestrians; this at a time when there were only 400,000 cars and three million people in the province. In 2014, by comparison, 481 Ontarians were killed in vehicle accidents, but with nine million cars on the road and a population of 14 million.

RELATED: Self-driving cars: Have we really thought this through?

This deadly clash between car and pedestrian led to a massive public debate over who should control the streets. In 1923 Cincinnati held a plebiscite on whether cars should be mechanically constrained from travelling no more than 40 km/hr. (It lost.)

Ultimately, North America decided the speed and efficiency provided by automobiles was preferred over the quaint clip-clop of horse-drawn days. Roads became the domain of cars and everyone else had to get out of the way. Playgrounds were created to get children off the streets and massive public safety campaigns were created to remind everyone about the need to “look both ways.”

Millard-Ball’s possible future represents, in many ways, a return to pre-car days when streets were places for socialization and play. He does admit, however, that other futures are equally possible.

In the same way that the public policy debates of the 1920s came down in favour of the car over pedestrians in allocating road space, it is conceivable that North American society will once again choose speed over quaintness when the autonomous car revolution finally arrives. Our future selves could decide the disruption and delay caused by pedestrians and bikes taking advantage of deferential autonomous cars is too great a burden to bear. In this case, a regulatory backlash might enable cars to maintain their dominance on the road.

Millard-Ball suggests fences could be erected to prevent pedestrians from crossing mid-block. Jaywalking laws could be enforced with greater urgency. Autonomous vehicles could even be excused from liability if a pedestrian or cyclist was found to be at fault.

Alternatively, human drivers might simply reject the entire concept of autonomous vehicles—and all the benefits they promise—on efficiency grounds. If robotic control means a slower and more aggravating drive, then why let the robot drive?

In such a scenario, drivers may see value in keeping hold of that steering wheel. “Human drivers retain the credible threat that they will collide with jaywalking pedestrians, giving them a strategic advantage in the ‘crosswalk chicken’ game,” Millard-Ball writes. Getting behind the wheel could thus become a way to scare off pedestrians and take back the road for cars. Game on.