A Texas company is selling this as a 'charitable innovation initiative' 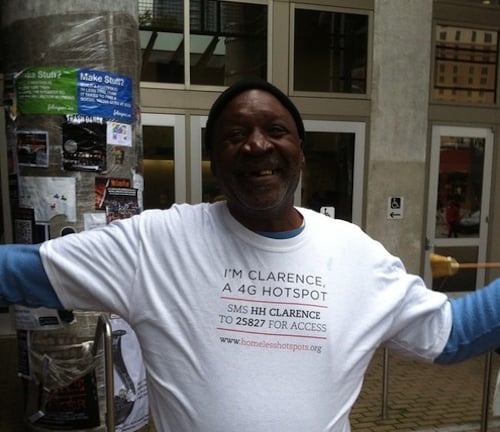 I am not making this up: homeless people are being used as human hotspots by a marketing firm.

It’s called a “charitable innovation initiative,” which loosely translates to “disgusting marketing ploy.” It’s happening right now on the streets of Austin, Texas, where the technology portion of the South By Southwest festival is underway. It works like this: you see a homeless dude hauling around some gear and wearing a t-shirt that says, “I’m Jimmy, a 4G Hotspot.” You pay (what you want) with cash or via SMS and then loiter around the guy for 15 minutes of the most awkward Internet access you’ve ever had. Yes, he keeps the money. No, that doesn’t make it okay.

Homeless Hotspots is brand-less for beta-testing, but if it’s deemed a success, expect future iterations to be brought to you by Verizon or whatnot.

Who’s to blame for this epic milestone in the history of bad taste? The firm is called Bartle Bogle Hegarty. Their handle, combined with the grotesque nature of their work, conjures up an icky Roald Dahl story. But there is no hint of a hoax on their website. This thing is 100 per cent for real.

BBH encourages us to think of their scheme as a digital modernization of the homeless street newspaper, a great idea that for decades allowed homeless people a way to make money without begging. But the similarities end there. Street newspapers contain content written by homeless people, advocating for their rights. Whether or not you actually read these papers when you “buy” one is beside the point: their existence dignifies the people who sell them and reminds you that they have ideas, opinions and humanity. Homeless Hotspots have the opposite effect–they reduce homeless people to fleshy routers. In airports you’ll find metal poles that perform the same task just as well. It’s degrading–literally.

And I guess it’s “working,” since SXSW attendees are debating the morality of it and people like me are writing about it. Some are urging those of us who are repulsed by Homeless Hotspots to just get over it and accept that it’s a clever way for a handful of needy people to make some decent cash.

But if BBH’s history is any indication, their handful of Human Hotspots will be exploited until the festival is done and then quickly cast aside.

If any of the homeless people participating are reading this now while wearing your borrowed WiFi gear, my advice is to do like Rusty and run: