Teddy bear's nitpick: The international mystery of the Beaumont Bear

Ace pilot Stephen Beaumont's teddy had it all as it went to auction. There was just one problem—the whole story. 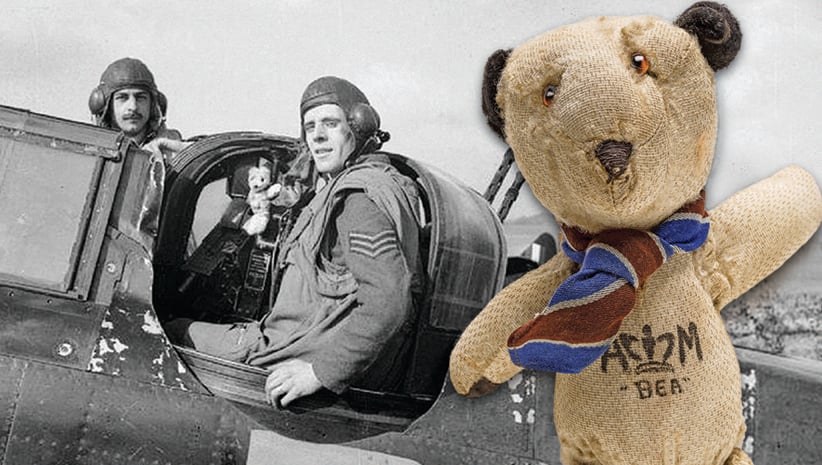 It all begins with a bear, a sweet little teddy who appears to have been much loved by someone. The $10,000 question is, by whom? Most of teddy’s pale golden fur has been reduced to patchy tufts. His black nose and ears are worn down and his arms are flung wide. His “eyes of orange glass with a black core” gaze out from the auction house catalogue in a perplexed—or is it worried?— stare. As he might well be, being a bear at the centre of an international mystery.

He was offered up as part of a sale late last month at the New York location of the British auction house Bonhams. The catalogue estimated collectors would pay $8,000 to $12,000, given that this bear was said to be the lucky mascot of celebrated Royal Air Force fighter pilot Stephen Beaumont, decorated for his service in the Battle of Britain and later in planning for D-Day. There was even a photo of an RAF pilot and an aircrew member in flying helmets and Mae Wests, a teddy bear in the cockpit between them.

The British newspapers ate it up. “Teddy bear mascot owned by celebrated Battle of Britain fighter pilot who carried it in his Spitfire cockpit goes on sale for £10,000!” cried the Daily Mail, casually doubling the asking price. The story quoted auctioneer Tom Lamb of Bonhams assuring readers that if this bear could speak, “it surely would have some amazing stories of dog fights, sorties and close shaves.” The bear even made an appearance in the “Page Six” column of New York gossip maven Cindy Adams, who trilled about “the mascot carried in the Spitfire cockpit of every flight” made by Stephen Beaumont before being handed down to his family, and suggested it would make a fine gift for Prince William’s new baby.

How exciting and how terribly, terribly British: the dashing airman in his Spitfire, his lucky teddy at his side as he strafes the Huns in the deadly skies over southern England. All of it verifiably true, except for the line about Beaumont being a celebrated pilot. And the identity of the pilot in the photo. And oh, yes—the bit about the teddy bear.

Beaumont was a brave man and accomplished pilot, but no ace. A country lawyer who learned to fly in the run-up to the war, he was a founding member of the 609 West Riding Squadron of the Royal Auxiliary Air Force, flying cover at Dunkirk and, soon after, escorting Winston Churchill’s plane to Tours on a failed mission to keep France in the war. In the summer of 1940, he served in the first hellish month of the Battle of Britain before being assigned to train desperately needed new pilots.

The pilot in the catalogue photo looked nothing like Beaumont and was posed atop a plane Beaumont never flew, wearing the wrong sleeve ranks, with a white-eared bear clearly not the one up for auction. Most importantly, why was Stephen Beaumont’s name even in the Bonhams catalogue?

I had a personal stake in that particular question. Stephen Beaumont was my grandfather, and none of his relatives, including me, had ever heard of him having a mascot of any kind, let alone a teddy bear.

Beaumont clan members in England, Canada, Norway and Germany began comparing notes. How bizarre. Did he ever tell you he had a bear? No—and that’s not him in the picture! The family pointed out the errors to the auction house and asked it to remove Beaumont’s name from the bear’s description before the sale, scheduled for late last month. Lamb was soon on the phone, doing damage control. The photo was used in error, he admitted. The description of “celebrated” was a bit of creative licence, and the catalogue had incorrectly identified the current owner, too.

But Lamb insisted the connection to Beaumont was genuine. The bear came with tags, and the tags said: “Lucky mascot of W/cmr Stephen Beaumont (rtd) 90319 RAF, flew on many sorties with him” and included Beaumont’s squadron number and former address in Yorkshire. A collector bought the bear—with tags attached—at a charity auction in 1996, 17 months before Beaumont died at the age of 87. According to Lamb, the current owner, New York collector Rodney Hilton Brown—who last year sold a tattered American flag that flew over a ship at Normandy on D-Day to Glenn Beck for $350,000—bought the bear around 2006 and remains convinced it was Stephen Beaumont’s bear.

That was not enough, and under pressure from the family, Bonhams reluctantly withdrew the bear from the sale.

Could my grandfather have had a secret mascot? Much as I would have loved that story to be true, it seemed out of character for our genial but unsentimental patriarch to have carried a teddy bear in his Spitfire. Nor did it make sense that our accomplished amateur historian would neglect to mention it in his detailed memoir of the war years.

Then there’s the problem of the bear itself. Daniel Agnew, former head of Christie’s Teddy Bear Department, says the bear’s fur of artificial silk plush and his “short and stubbier limbs” mark him as a bear made later than 1945. “The bottom line is this bear could not have flown during the war,” says Agnew, who now consults on bear collecting and runs teddy bear auctions twice a year.

Agnew’s fellow collectors on both sides of the Atlantic began discussing their suspicions almost as soon as “the Beaumont Bear” became a story. “It’s all a bit naughty, isn’t it?” read one message posted to Agnew’s Facebook page. “Come on, bear people . . . let’s speak!” said another. Some of them took to Twitter, including @OldeTeddyBears, a British collector coincidentally named Lynn Beaumont. “I feel sorry for ‘Poor Teddy Beaumont’ today,” she tweeted, “because who is going to want him now & after all he is a bear with feelings!”

The news about the teddy bear inspired a letter in the London Telegraph from a reader, 89-year-old Jean Mellows, who wrote about a five-inch-bear with her maiden name sewn onto it that she gave to her fiancé to take with him into Germany during the Second World War. “He was a Mosquito night-fighter pilot and flew 50 ops accompanied by my bear,” Mellows wrote. “We were married for 50 years but now, sadly, I just have the bear.” The letter went viral.

The “Beaumont Bear” incident, not surprisingly, also caught the attention of military and history buffs in the U.K. As much as the British adore their teddy bears, they love their Battle of Britain pilots even more. This summer marks the 75th anniversary of the battle, those three months of fierce dog fights in the sky when the British fought to deny Germany the air superiority needed before a land invasion. The brave RAF pilots inspired Winston Churchill’s famous line: “Never in the field of human conflict was so much owed by so many to so few.” Of the almost 3,000 airmen involved, fewer than 30 are still alive, and according to historian Geoff Simpson, the market for Battle of Britain memorabilia is hotter than ever. “A lot of items allegedly related to the Battle of Britain are forgeries or have been tampered with,” says Simpson, an author of several books about the battle and a trustee of the Battle of Britain Memorial. “Even if this bear is genuine, there are lots of things on the market that aren’t.”

When I called Lamb and told him I was going to write about this bear of dodgy provenance, including the possibility that the bear is a fake, he sighed. “If someone gives me a note or a letter and says that’s what happened, that’s what I note down. If it’s wrong, it’s not due to fraudulent activity,” Lamb said. “Some pilot would have had to lie about his activity, chosen another man’s name and put the correct address down,” he said. “A lot of stuff on that thing is correct.”

But with so many mistakes in the description and promotion of the bear, can Lamb really stand by his Beaumont story? “I only sell stories,” said Lamb. “I can make a $1,000 thing worth $300,000 with the right story.”

The question, of course, is if it was the right story. Agnew, formerly of Christie’s, says buying at an auction is no different from buying elsewhere, it’s “buyer beware.” The auction houses handle provenance like a jigsaw, putting together pieces of information to build a narrative. “If you know your stuff, and pieces fit into place, you can build a clear picture. Once you get to a level of confidence, you can stick your neck out,” says Agnew. “You need to start with a possibly, then get to a probably, then get to a ‘yes, it’s right.’ ”

Asked about the teddy bear collectors’ opinions, “I haven’t read the comments on that yet,” said Lamb. “All I can say is it sold with a tag . . . Everybody can argue the wrong name on the tag but it doesn’t change the fact that the name was there.”

But if collectors say the bear isn’t of the right vintage? “I know these bear collectors. They get very excited. If they think it’s the right bear, they will pay hundreds or thousands of pounds for it. They hunt in packs. They’re fanatical. And they hate each other.”

The Beaumont family was mostly bemused and slightly irritated by the whole bizarre affair. The Stephen Beaumont we knew was many things: a loving patriarch, a decorated pilot who received the Order of the British Empire for his contribution to D-Day planning and a pillar of his community who returned to his law practice after the war and eventually became high sheriff of West Yorkshire, a ceremonial representative of the British Crown. We are pretty sure he was not the owner of a threadbare, black-eared teddy bear. As for the bear, whether he ever accompanied a brave Spitfire pilot into battle, only he knows for sure.