Jann Arden reflects on the awe Terry Fox continues to inspire in Canadians, 40 years after his epic cross-country feat that saw him run a marathon-length distance every single day 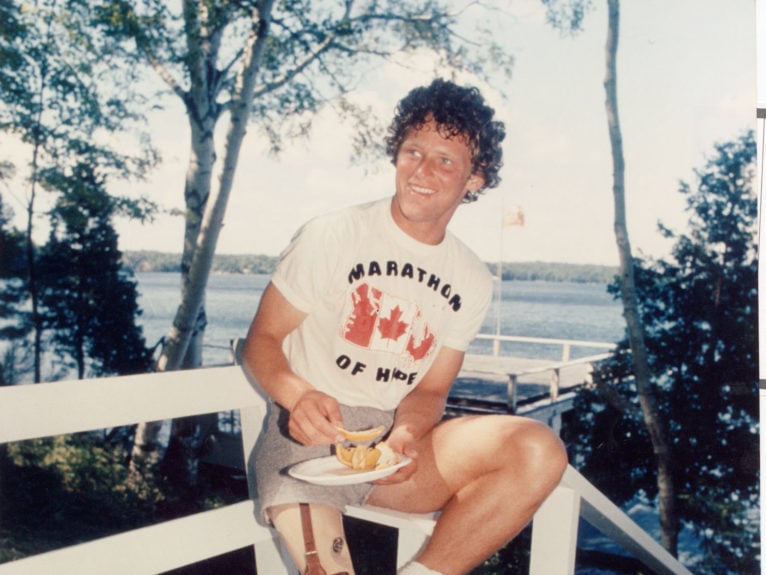 It’s funny to me—well, maybe not funny, but curious perhaps—how often I think about Terry Fox. Every single time I drive across the country in a tour bus and happen upon Thunder Bay, Ont., Terry comes blazing into my mind with a huge smile on his face. I think about how long we’ve been driving and driving and driving; how big our country is, how vast and open and how far it is between gigs, between cities—and then it occurs to me that Terry Fox ran here from Newfoundland. I will never not be in awe of that.

We’ve stopped at his Thunder Bay monument many times. The beautiful statue showing his young face pointed upwards into the sun, into the future. The band and crew climb out of the buses to stretch their legs and shake off the hours, to grab some fresh air, but mostly to stand and look at Terry and marvel at what he did. Everybody has a story of where they were in 1980 when he started to run. The excitement that started to gather around him almost immediately was palpable—the media didn’t take long to document his every move—and kids ran along beside him as he jogged into every small town that was in his path. It was like nothing we had ever seen before in our lives, because it was something that we’d never seen before in our lives.

His humility was so distinct. The way he spoke, the way he moved through his days with such a mindful dedication to his cause—which became our collective cause to eradicate cancer—touched the most hardened hearts.

He united the country in a way that we hadn’t ever experienced and haven’t experienced since, in my humble opinion.

None of us can get our heads around it—even all these years later, his Marathon of Hope seems as heroic and as remarkable and as unbelievable as ever. He ran an average of 26 miles a day. Any seasoned athlete can tell you that this is unreasonable and unthinkable, and yet Terry made it seem like it was the most normal undertaking in the world. It wasn’t, and we all know that. We all shake our heads in heartfelt disbelief because he made us feel so alive and so grateful to call him ours.

Terry Fox was ours and we claimed him from coast to coast to coast and we have never been prouder. I cried for a week after he died. I felt like I knew him, like we went to school together and drank beer down at the river and rode bikes around the block and swam at the local pool until we could hardly keep our eyes open.

Terry let us all feel like he belonged to us. Unselfish.

I am so grateful that I was alive to serve witness to this young man’s life.

Jann Arden is an award-winning Canadian singer, songwriter, broadcaster, actor and author. This letter is excerpted from the forthcoming book Forever Terry: A Legacy in Letters, edited by Terry’s younger brother, Darrell Fox. Timed to the 40th anniversary of the Marathon of Hope this September, the book features letters from 40 Canadian contributors, including Wayne Gretzky, Silken Laumann, Sidney Crosby and Christine Sinclair. Royalties will support the Terry Fox Foundation.

Excerpted from Forever Terry: A Legacy in Letters. Copyright © 2020 by The Terry Fox Family. Published by Viking Canada, a division of Penguin Random House Canada Limited. Reproduced by arrangement with the Publisher. All rights reserved.