The 100-m finals! Wimbledon 2.0. And everything else to watch on Sunday 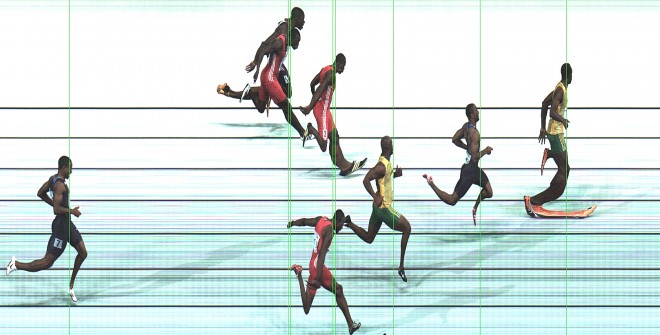 Who is the world’s fastest man?

Every four years, the world has to stop and watch for less than 10 seconds. This year’s 100-m finals will not only include the current world’s fastest man, Usain Bolt, but (provided the morning semi-finals go according to plan) this race will have the fastest runners ever compiled. While Bolt looks to top his world record of 9.58(!) seconds, he won’t overlook world champion Yohan Blake, who recently beat Bolt at the Jamaican qualifiers. It could be a Jamaican sweep of the podium if Asafa Powell has anything to say about it: he is the third fastest man in history, behind Bolt and American Tyson Gay. Oh, and Gay should also be in the finals.

To put it in perspective, Donovan Bailey’s world record gold medal 100-m sprint (9.83 seconds) in Atlanta 1996 might not have even cracked the top five in this finals. It’s that fast.

No Brit has won a major at Wimbledon since 1936, when Fred Perry took the crown. Great Britain thought the drought may have ended last month, when Andy Murray was in the finals. After winning the first set, Murray dropped the next three straight to Roger Federer, the greatest tennis player of all-time. After losing, Murray broke down in tears in front of the crowd, saddened he couldn’t get over that hump. Who would have thought that his chance at redemption would be the next month?

Federer is back in the finals after winning a four-and-a-half hour marathon match against Juan Martin del Potro. Keep in mind, the Olympics is a best-of-three in sets. Murray upset former world no. 1 Novak Djokovic of Serbia in the other semi-final. And so, he’ll be back on centre court at Wimbledon against Federer. You can be sure all of Britain will be watching.

Jennifer Abel and Emilie Heymans won Canada’s first medal in London, a bronze in synchronized diving. Now they have the chance to add more medals to their trophy case, but no longer as a team. In the individual 3-metre springboard diving semi-finals both qualified easily for the final round: Abel finished fourth, while Heymans had the eighth best score. They’ll have to have the dives of their lives to share the podium with the best divers from China, Wu Minxia and He Zi, but it’s doubtful either Abel or Heymans would be upset with another bronze.

Canada’s women’s basketball is turning some heads. They were minutes away from beating world no. 2 Russia in the tournament opener. After beating Great Britain, they upset Brazil and were guaranteed a spot in the Olympic quarter-finals. Kim Smith leads Canada’s scoring going up against Australia in their final group match. A win for Canada would go a long away to avoiding a match-up against powerhouse USA in the first knockout round.

Update: Australia beats Canada 72-63. Both teams move on to the next round.

New to the Olympics this year is the men’s omnium, a six-part cycling event inside the velodrome. Yukon’s own Zach Bell will look to move up into the medal standings for the final three events on Sunday: the 4-km indivual pursuit, a 16-km scratch race with all the riders competing at once, and a final time trial. It’s crowded, high-speed and sure to cause some crashes. That’s the excitement and danger of the velodrome.

Canada’s golden jumper: Rosie MacLennan won Canada’s first gold in London 2012. The trampolinist had a phenomenal performance to put her on top of the standings with only the two Chinese competitors left. He Wenna, the world champion and defending Olympic gold medallist, looked to knock MacLennan off the top spot, but she fell in the final moments. The fall guaranteed MacLennan’s victory and the first time O Canada would be played at this year’s Olympics.

Blade Runner doesn’t disappoint: Oscar Pistorius did not intend on letting any of his supporters down. The South African with carbon-fibre prosthesis for legs was the first person without biological legs to compete in a running event at the Olympics. He ran though his 400-m qualifying heat in second place, advancing to the semi-finals on Sunday.

Serena cruises: Serena Williams put on a tennis display at Wimbledon. Playing against the world’s best, she had her serve broken only once in the entire tournament. This included a 6-0, 6-1 thrashing of Maria Sharpova in the finals. In six matches en route to gold, Serena never lost a set, and only lost a total of 17 games, playing against many former world no. 1s along the way. It was the most dominant performance possible at the highest level.