The absolute, honest truth about UFOs

The confirmed presence of extraterrestrials would give a much-needed boost to the presidency of Barack Obama, writes Scott Feschuk 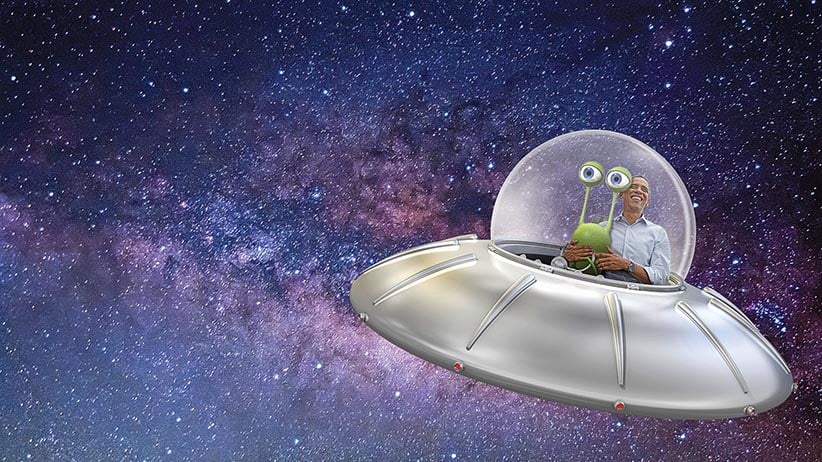 Remember UFOs? Young people might not believe it—but there was a time when claiming to have been abducted by aliens was all the rage among hillbillies, crackpots and anyone desperately trying to explain away a suspicious bum injury.

It’s the granddaddy of conspiracy theories: that, for well over half a century, governments have covered up the “fact” that extraterrestrial beings have visited us aboard a wide range of spaceships, each blurrier than the last.

Some still want to believe. This month, the Disclosure Canada Tour visited four major cities to blow the lid off the “truth embargo on the extraterrestrial presence issue.” A sextet of nerdlingers charged 50 bucks a seat to discuss “Earth’s cosmic Watergate” before an audience of many presumed virgins.

The big draw among tour participants was Paul Hellyer. Now 91, Hellyer is a former minister of defence under Lester Pearson, the longest-serving member of the Privy Council and, more recently, a crazy person. He claims to have seen a UFO a few years ago near his cottage, noting, “It looked just like a star.” So far as anyone can remember, this marks the first time a UFO witness has made a claim—and provided the obvious explanation for what he really saw—in the same sentence.

(FYI, Hellyer also believes much of the world is secretly governed by an elite cabal. If he can just ﬁgure out how Lee Harvey Oswald faked the moon landing, the guy is a cinch to win Conspiracy Yahtzee.)

The movie-style trailer for the Disclosure Tour is worth a watch. Over some wicked guitar licks, the six “big-name” speakers at the event are introduced in freeze-frame—their surnames appearing dramatically on screen in block letters. The message? These guys are exactly like those bad-asses from The Expendables, but with more eczema and delusions.

The highlight comes halfway through. Two men are driving. We view them from the back seat—possibly for drama-based reasons; more likely because no one associated with this production can afford a GoPro. One guy speculates about other dimensions, then says: “The answer to those questions—just by the very fact we can ask these questions—is evidence that there must be some sort of answer out there about any number of those questions.” Congratulations, hero: In a single sentence, you managed to make less sense than the final two seasons of The X-Files.

Still, the tour represented a throwback to a time when conspiracy theorists were agreeably eccentric, unfamiliar with the sort of casual cruelty later displayed by 9/11 and Sandy Hook “truthers.” In a way, these UFO obsessives are even to be admired: They have devoted their life’s work to bravely ignoring every piece of evidence that their life’s work is really dumb.

1. In the age of smartphones, the existence of flying saucers ought to be better documented by now than any other phenomenon, up to, and including, double rainbows and drunken skateboard fails. Let’s face it: If UFOs were real, Google would already be mapping their interiors. Click left to visit the probe-a-torium! And we’d all be watching reality shows in which Jillian Michaels humiliates our new reptile overlord into getting back in shape after binge-eating the bearded hermits of North Dakota.

2. Governments today would have zero interest in concealing the truth about aliens. In fact, the confirmed presence of extraterrestrials would give Barack Obama the biggest boost of his presidency. The opportunity to greet and/or explode alien species? History would surely give him a mulligan on his foreign-policy missteps if he were to ace interplanetary relations. Think about it: the first black President and the guy who ushered in an era of peace and partnership with the slug zombies of Zorgan 4? Good luck topping that, Hillary.

Here in Canada, meanwhile, it’s a safe bet that Stephen Harper would embrace the opportunity to greet an interstellar visitor—with a series of attack ads. Ragamon the Unquenchable purports to be a murderous, amorphous shape-shifter—but he’s just not up to the job of planetary genocide.

On the bright side, Harper could also be counted on to fast-track new legislation. Within weeks, Canadian parents would be entitled to a $500 tax credit for each child who spends more than two months of the year enslaved in an alien work camp.