Image of the Week: If you think the line-ups at your hometown Tim's are bad, wait'll you see the ones in China 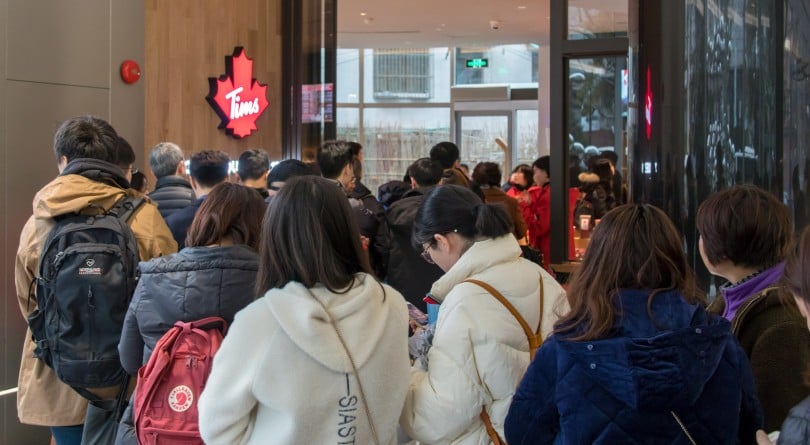 If the current Canadian-Chinese political drama were a Shakespearean tragedy—casting Huawei heiress Meng Wanzhou, under house arrest in Vancouver, and the three detained Canadians in China as the leads—then Tim Hortons would enter at the top of Act II as the clown. It appears stage right, cutting the tension with its first-ever mainland Chinese location, offering steeped black lemon peach oolong and salted egg yolk Timbits to round-the-corner lineups in a bustling Shanghai central square. The audience would laugh: who lines up to get into Tim Hortons? But as the Canadian-made chain, now owned by Burger King, begins its 1,500-store expansion across the Middle Kingdom, the laughs fade away. “Tims,” as they are calling it in China, is continuing a longstanding tradition of fast-food chains rebranding as high-end dining experiences in China. The biggest Starbucks in the world is also in Shanghai, with craft beer and nitrogen-brewed tea; Pizza Hut offers three-course meals of steak and pasta, with dessert and wine, across the country. The reason? China is a massive untapped market with consumers who see western brands as inherently trustworthy and culturally unique. With that mindset, it’s not so weird that maple macchiatos are taking a turn in the spotlight.