The enduring legacy of Canada's racist head tax on Chinese-Canadians 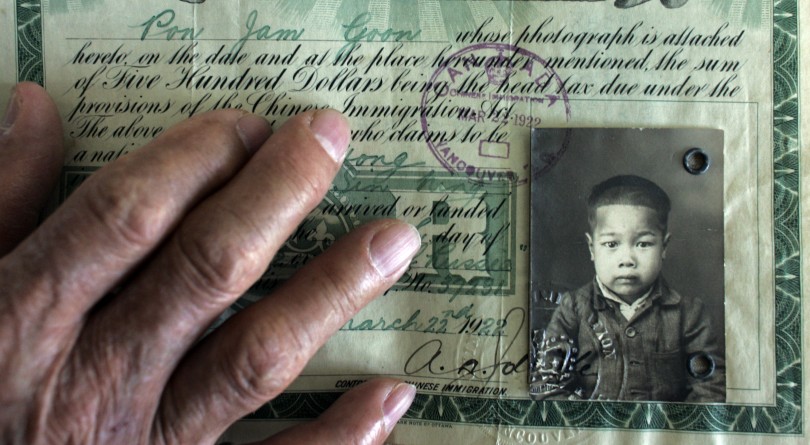 James Pon, 88, has the original documents showing the Chinese Head Tax paid ($500), for each his mother and him, in 1922. (Peter Power/Toronto Star/Getty Images)

On June 22, 2006, Stephen Harper formally apologized for the head tax of up to $500 levied on 81,000 Chinese immigrants to Canada from 1883 until it was repealed in 1923—when the Chinese Exclusion Act came into law, preventing Chinese people from moving to the country until 1947. William Ging Wee Dere, whose father and grandfather paid the tax, successfully campaigned to redress those measures: Ottawa has apologized and paid $20,000 in compensation to surviving head tax payers and the spouses of deceased ones.

Retired railroad engineer Dere, 70, was born in Toishan/Taisham, China in 1948 and immigrated to Canada in 1956 with his mother, growing up in the back of his father’s hand-laundry business in Verdun, Que. He learned of his family’s struggles only after his father died in 1982* and his mother gave him a cookie tin containing his dad’s documents, including a head tax certificate. In 1993, he released the documentary Moving the Mountain to draw awareness to the head tax’s racist legacy and the campaign to redress it. In Being Chinese in Canada: The Struggle for Identity, Redress and Belonging, Dere chronicles the hardships suffered by his grandfather and father, who worked as immigrants in Quebec in the 1920s, the head tax redress campaign and how those experiences shaped his own identity.

Q: You’ve talked about how it’s been a struggle to make people aware of the head tax and the history of Chinese-Canadians. Why do you think there isn’t more awareness around it?

A: I think that is a direct legacy of the head tax and the Chinese Exclusion Act, because our community is very disjointed. It never developed normally because of the separation of families and the exclusion of Chinese from Canada for three decades. Many don’t know the foundation of Chinese-Canadian history—how they lived, how they came and how they struggled and survived here in Canada.

Q: I’m second-generation Chinese-Canadian. My mom immigrated from Hong Kong in 1976, so she was never directly impacted by the head tax. Her group of immigrants and the waves and generations that have come after, like my own, don’t really have much understanding of, or sympathy for, this history.

A: I don’t see too much passion in the young people these days because they’re two, three generations removed from what happened. Maybe they don’t have an organic connection to the past. But I explain to them that that legacy still continues because of the lack of services and the struggle that we’re going through today in terms of getting equality in housing, in finding jobs, especially the recent immigrants who are now coming from China. They’re professionals in order for them to get through the point system to get into Canada. But once they arrive here, they can’t get jobs in their professions and they end up working in factories and sweatshops.

Q: In trying to appeal to younger generations of Chinese-Canadians, how do you make these events that happened so many years ago seem relevant today?

A: On a personal basis, it’s a question of knowing who you are. Do you have an identity awareness or an identity consciousness? If you do, then it’s the first step in standing up for what you are. It’s been a lifelong curse to feel comfortable with my identity. I think if young people come across discrimination, or somebody calls them a name on the street and they feel hurt, they have to understand why. As a person of colour, we will inevitably come across racism because we live in a dominant white society. The burden of fighting against racism is on the shoulders of racialized minorities in Canada and Quebec.

Q: What was life like for your father and grandfather working in Quebec in the 1920s?

A: The only work that they could do was laundry work. They were excluded socially and economically from the larger society. It was a hand laundry—you did everything by hand—so it was a very self-reliant economy. You work hard, you make some money and you’re able to eat and feed your family back in China. My grandfather came to Vancouver in 1909 and first started in the laundry business with a partner. And then he moved to Montreal around 1920. My father and my grandfather worked together for about 30 years. Once they saved enough money, they would take a trip back to China. And that’s when the children would be born. According to the law, they couldn’t stay more than two years in China; otherwise, they would lose their right to return to Canada. The Chinese [in Canada] were non-citizens and they didn’t have the right to vote. Essentially they didn’t have any civil rights in Canada whatsoever. It was only after the Chinese Exclusion Act was repealed in 1947 that my father got his citizenship and moved the rest of his family to Canada in 1950.

Q: Why do you think the movement and redress took so long?

A: It took 22 years—it was a generational struggle. It took so long because the Canadian government was intransigent in their attitude and approach towards redress. We started off with Pierre Trudeau. NDP MP Margaret Mitchell* sent a letter asking for repayment of the head tax. [Trudeau] ignored the situation. Then we went through Brian Mulroney, who did quite well for the Japanese—he redressed the Japanese internment, but he was unable to overcome bureaucracy to redress the Chinese, Ukrainians, the Jewish and others who were affected by exclusionary practices of the government. After Mulroney, it was Chrétien, and he formed this policy of “no apology, no compensation.” For 10 years, the government refused to talk with us. Then you have [Paul] Martin, who carried on this policy of “no talk, no redress, no compensation.” It was only until Harper, who saw an advantage in redressing and apologizing for the Chinese Head Tax, that [an apology was made] in 2006. In the beginning, we were all naive. We thought that if we explained the case, they would do the right thing because it was such an obvious case of injustice and discrimination. But, of course, the government has no heart. You can’t appeal to a government’s emotions…So we started to organize a lot deeper in the community, organizing large meetings, demonstrations in Parliament and so on.

Q: You were at the redress ceremony, but you almost didn’t go. Is that right?

A: Yes, because the government never told us what they were going to do, other than saying that they would apologize. We were sending letters and submissions to the government to try and get a meeting to negotiate a settlement. So it wasn’t a redress settlement, it was a redress pronouncement on the part of the government. They controlled everything, so we had no input into what the redress should be. We didn’t want to encourage people to go because we were afraid that people would just go for photo op and give Harper all this credit for partial redress. [At the time] my mother had suffered from a stroke. So I discussed it with my siblings and we thought that we should go to represent our mother. My sister and myself, we went.

Q: I guess it was bittersweet, because there still hasn’t been any resolution for the descendants of head tax payers.

A: Yes, for instance, my sister—she was glad for redress for our mother, but her husband’s parents had passed away, so her husband’s family would get nothing. It was bittersweet in that sense.

Q: In your book you have a quote from [journalist] Ray Yao criticizing the descendants for campaigning for full redress from the perspective of less-privileged Chinese immigrants “working 10 hours a day in a noodle shop making minimum wage: you are a lawyer and driving a bloody SUV, and then you want your $20,000? You didn’t suffer, your grandparents suffered and you reap the benefit?” Do you think there’s some truth to that?

A: Many of the leadership in our movement were lawyers in Toronto. So he took a swipe at these people who were calling for full redress. Ray knows that not all descendants of head tax payers are lawyers; some still suffer the consequences of the head tax.

Q: There is this stereotype of Chinese-Canadians today being doctors, lawyers—an accomplished “model minority.” I wonder whether that makes it difficult to elicit the sympathy from non-Chinese Canadians for this past suffering.

A: Not all the immigrants who come here are part of the model minority. The model minority is a false concept that people like to paint—the stereotype of the Chinese being well-educated and being professionals. But like other members of Canadian society, in the Chinese community there’s a class structure. Not everybody attains that top echelon in society.