The fine art of heckling

Anyone can yell insults at the ballpark. Mastering the delicate art of heckling takes finesse. 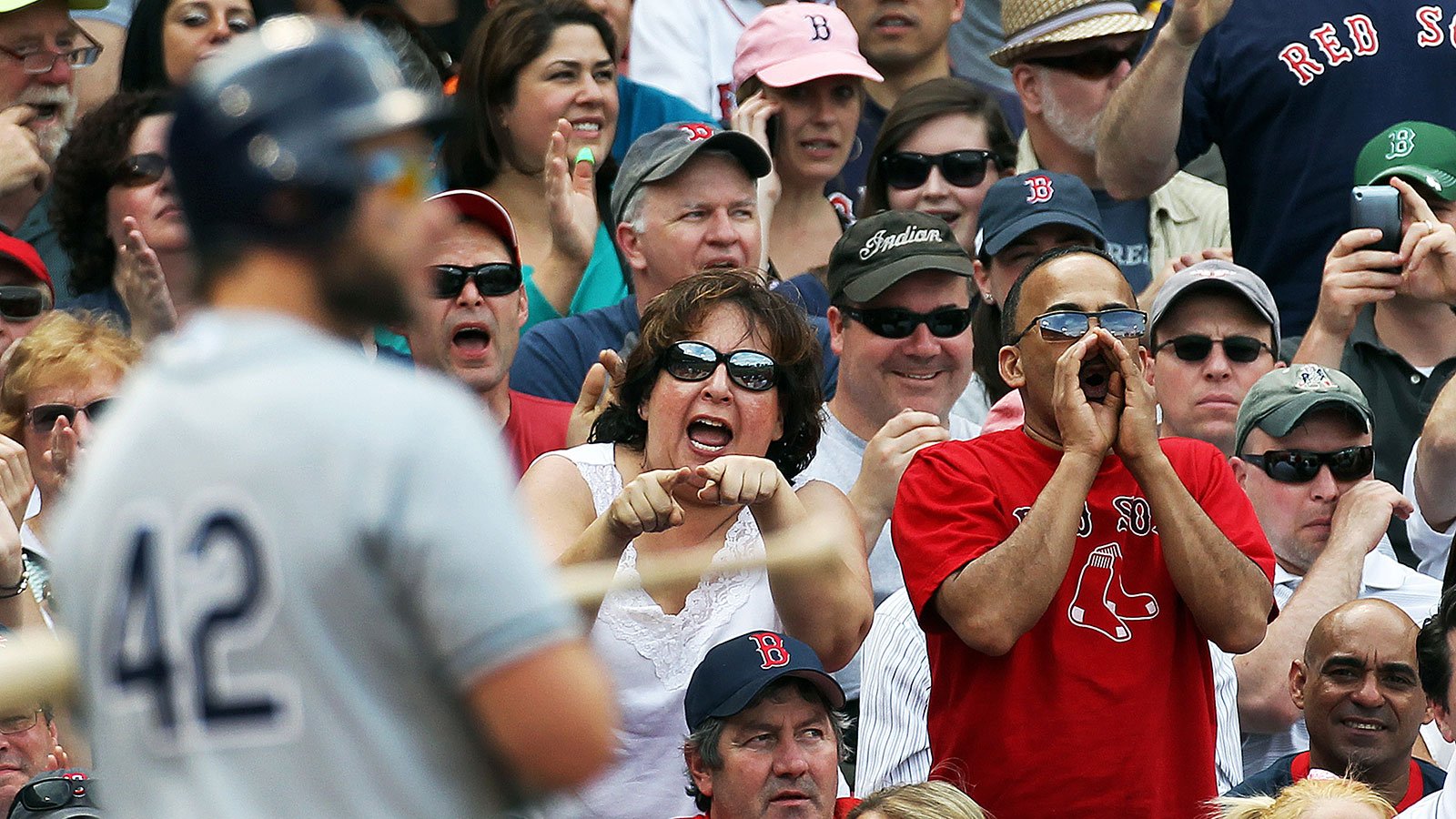 George Bernard Shaw, the famed Irish playwright, was not a fan of America’s national pastime. He marvelled at baseball’s “slowness and stupidity,” and wondered why anyone would ever sit through a second game after enduring a first. “A totally unanswerable question,” Shaw famously wrote in 1924, after attending an exhibition game in London between the New York Giants and the Chicago White Sox.

The only “delightful” part of his afternoon? That “spectators are allowed, and even expected, to join in the vocal part of the game”—namely, throwing the batter “off his stroke at the critical moment by neatly timed disparagements of his wife’s fidelity and his mother’s respectability.”

Nine decades later, little has changed. In baseball, three strikes is still an out. The Chicago Cubs are as cursed a bunch as ever. And legion of loudmouthed fans continue to believe that a sharp, biting heckle—executed just right, like a late-inning sacrifice bunt—has the power to alter a final score.

He heard me. I made him swing through that curveball.

More than any other venue, a ball yard is indeed a heckler’s paradise: a game of predictable, quiet lulls begging to be filled by a booming voice. The athletes caught in the crosshairs do so much more standing than actual moving—in the on-deck circle, in the bullpen, in their lonely patch of outfield—that the player-heckler dynamic is almost unfair. At least stand-up comedians, barked at nearly as much, have the ultimate equalizer: a microphone. Ballplayers have little choice but to stay put and pretend they’re deaf.

Like baseball itself, the art of the heckle has evolved (somewhat) since Shaw sat in those bleachers. Thankfully, the kind of vile, racist taunts that once greeted Jackie Robinson are no longer tolerated, and even the most woefully unoriginal hecklers—the “You suck!” bunch—rarely stoop to mocking wives and mothers anymore. And, in this modern age of smartphones and YouTube, mere razzing isn’t enough; insults need to be recorded, uploaded and shared with everyone who didn’t have a ticket. (One clearinghouse of clips, HeckleDepot.com, was created by a fan who was such a dreadful heckler that a player actually told him he was the worst he’d ever heard. His offensive jab? “Hey Hansell!” he yelled to Minnesota Twins pitcher Greg Hansell. “Where’s Gretel?”)

That guy is hardly alone in his awfulness, which is the one thing that hasn’t changed since Shaw’s nasty critique. The vast majority of hecklers, to borrow their term, suck at it. The truly gifted ones—those talented few who understand the rules, the etiquette and the point—are as rare as a .300 hitter and, for my money, just as enjoyable to watch.

There really is a set of rules, first published by  the Sporting News in 1948 and inspired by Philadelphia A’s superfan, Pete Adelis, the so-called “Iron Lung of Shibe Park.” A giant of a man with equally enormous vocal chords, Adelis (also known as “Leather Lungs” and “Foghorn”) was so good at aggravating enemy players that the New York Yankees offered him free tickets to their stadium so he could torment their opponents, too.

His “Rules of Scientific Heckling,” as the Sporting News described them, have not aged a bit. Know your players. Take it, as well as give it. Nothing purely personal. No profanity. (Translation: Screaming “F–k you!” to a batter, especially with young children sitting nearby, is not a brilliant heckle. High-fiving those kids immediately afterward doesn’t make it better.)

Robin Ficker, one of sport’s most legendary badgers, adhered to a similar mantra during basketball games: Do your research, consume no alcohol and never spew anything that can’t be printed in the next day’s newspaper. A Maryland lawyer and longtime Washington Bullets fan, Ficker had courtside season tickets directly behind the visiting team’s bench throughout the 1980s and ’90s. During one memorable game against the Chicago Bulls, then coached by Phil Jackson, Ficker screamed out excerpts from Jackson’s 1975 autobiography, Maverick, which included some unflattering details about his off-court life as an NBA player. “Phil was getting mad at me for reading what he wrote,” Ficker later told a reporter. “I told him if he was that mad about it, he shouldn’t have written it.”

Whatever the setting—athletics, politics, the local comedy club—the best hecklers are the ones who realize there’s a fine line between wit and idiocy. They remember that young ears might be listening. They know how to prepare for battle, e.g., sift through autobiographies. And they understand that at its core, heckling is not about being an inebriated, belligerent jerk. It’s about making everyone else in the section laugh, even if the target on the field pretends not to hear.

As, for instance, the two New York Mets fans who, 2015, showed up in Queens with a few black Sharpies and some neon bristol board. Without screaming a single word, they managed to raise baseball’s heckling canon to new heights.

In town were the San Francisco Giants, including their eccentric, dugout-dancing right fielder, Hunter Pence. An eight-year major-league veteran, Pence has weathered his share of taunts, mostly because his swing is so unorthodox, so violent, it’s baffling how he ever makes contact. (One writer described him as “the best worst baseball player of all-time.”) And if that’s not ammunition enough, his nickname is Captain Underpants—because apparently “Hunter Pence” sounds like “underpants,” if you say it fast enough.

But when the Captain took his position that August night, the men with the markers launched an attack that was even more unconventional than Pence’s batting stance. “HUNTER PENCE CAN’T  PARALLEL PARK,” one of their signs declared. “HUNTER PENCE EATS PIZZA WITH A FORK,” said another.

By the finale of the four-game series, the pair’s neon posters had gone viral. Fellow fans crafted their own copycat versions—“HUNTER PENCE PREFERS BATHS,” “HUNTER PENCE HATES BACON”—and the hashtag #HunterPenceSigns was born.

“HUNTER PENCE WHISPERS SORRY WHEN HE CATCHES A FLY BALL”

In the end, the novel signage didn’t much help the home side. The Giants took three of four games, and Pence, clearly unfazed, smacked two home runs and drove in seven. But how he performed, good or bad, was never the point. The men in the Mets shirts were focused solely on their own performance—and the pursuit of the perfect heckle: hilarious, catchy and clean enough to be repeated on this page.

By every standard, they smacked a heckling grand slam, so much so that even the brunt of their Sharpies felt compelled to join in the fun. “HUNTER PENCE RETURNS LIBRARY BOOKS BEFORE THEY’RE DUE SO OTHERS CAN ENJOY THEM AS WELL,” he tweeted. (“It’s like Hunter Pence isn’t me anymore,” Pence told a reporter the other day. “It’s like this other entity, and it’s an extremely interesting entity.”)

As an avid fan (and somewhat decent heckler; base coaches are my preferred target), I appreciate seeing a fellow agitator make headlines for all the right reasons, and not because a relief pitcher chucked a chair at him (Frank Francisco, Texas Rangers, 2004). It provides hope, however faint. Maybe, many years from now, those Hunter Pence signs will be remembered as the start of a heckling renaissance. Maybe the drunk and the slurring will finally clue in. Maybe that clown in the Jose Reyes jersey (Rogers Centre, Aug. 10, Section 127) will realize his three kids hear what he says.

Hey, if a Mets fan can learn to print, anything is possible.

Even other ballplayers—channelling the same creative juices as the sign guys—have raised the heckling bar this season. During a rain delay in Pittsburgh, Cincinnati Reds second baseman Brandon Phillips was so harangued by one particularly relentless fan that he tossed him a baseball. Instead of a signature, though, Phillips wrote a personal message: “Dear Drunk Guy, thank you 4 all the love & support!! Now take this ball and shut the phuck up!!” Phillips violated one of the golden rules (no profanity, even misspelled), but, a few weeks later, Houston Astros pitcher Dallas Keuchel nailed it. Heckled mercilessly by an Oakland Athletics fan, Keuchel threw him a ball that read: “Thanks for helping pay my salary for today.”

It was signed with a heart. Delightful, as George Bernard Shaw would have said.

FILED UNDER: baseball heckling The Vault