The Five Hole: Yakupov a league leader in one category 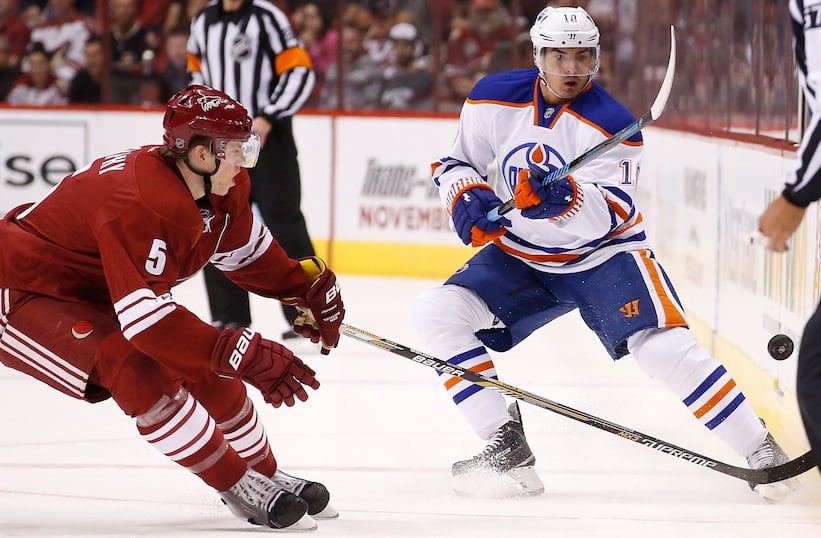 1a. Some say Nail Yakupov has yet to live up to his potential – but maybe we’re judging him by the wrong criteria. Take a look at the score sheet and, sure, he hasn’t yet proved worthy of his standing as a No. 1 overall draft pick. But lately the Oilers forward has been stepping up his game as an heir apparent to Alex Ovechkin in another important area: the production of inadvertently amusing quotes.

Yakupov’s latest shows his mouth to be in mid-season form: “Every day I am talking to media all about defence. I don’t want to talk about this. Sometimes, it pisses me off. Let’s talk about different things.”

And really, when you’re a minus-39 over your past 71 games, any other topic of conversation would be preferable. Politics. Religion. The sociological implications of mammalian birthing rituals. Hey, media, seen good movie lately? 22 JUMP STREET SO SO FUNNY WITH STRONG MAN AND FUNNY LITTLE FAT MAN!

1b. By the way, did you know that Yakupov still lives with this mother? How is this not a reality show or a sitcom opportunity for Yakov Smirnoff? In Soviet Russia, puck shoots you!

2. Speaking of the master, this exchange from Kristina Rutherford’s interview with the Washington captain may be the Oviest thing ever:

SN: Do you know anything about Corsi and other fancy stats?
Ovechkin: No.

SN: You do know about plus-minus.
Ovechkin: It’s great.

SN: You get a little bit ripped for your plus-minus, and you’ve said it doesn’t matter. So now you’re saying it matters?
Ovechkin: I’m confused right now.

Honestly, I’ve read that about 20 times and it just keeps getting better. If I could host a dinner party and invite any three people, dead or alive, I’d choose Alex Ovechkin from three different points in time and let them have a conversation with one another.

3. I’m liking this Tyler Toffoli kid from the Kings, and you know what that means – it means I’m 46 years old and therefore officially entitled to refer to anyone younger than me as “kid,” just like all the sportscasters do, even when the “kid” they’re describing is, like, 26 and the father of five.

4. At 0-6-2-2, Carolina is the league’s only winless club. Let’s take a look at some of the early signs the Hurricanes will not be making the NHL playoffs:

5. Dear Canadians who are not fans of the Toronto Maple Leafs: I hope you don’t mind if I speak for you, but I sense that we share a common bond.

On our collective behalf, I want to express my deep appreciation to the entire Leafs organization for, well, let’s start with the last three years. Thanks for that, you guys. You have given us so much happiness with your sadness.

And still you keep on giving! It’s not even November and already the fans at the Air Canada Centre have turned on the Leafs, hurling jerseys onto the ice and chanting, “Let’s go Raptors!” And now speculation is that coach Randy Carlyle may have narrowly saved his job thanks to Toronto’s Tuesday night win against the lowly Buffalo Sabres – a game that put the Leafs 11 per cent of the way through the season, and 173 days from the day that Carlyle signed a contract extension.

Toronto, this sustained level of futility and crisis almost makes up for you not electing Doug Ford. (Isn’t our entertainment worth more than your civic pride and global reputation?) I hope some of you are at least going to help Doug move Rob’s waterbed out of the mayor’s office. That thing is surprisingly heavy.