The Interview: An eminent Catholic scholar on a new kind of Pope

Historian Garry Wills on the openness of Pope Francis, his respect for the faith of the people—and why his bishops will fall into line 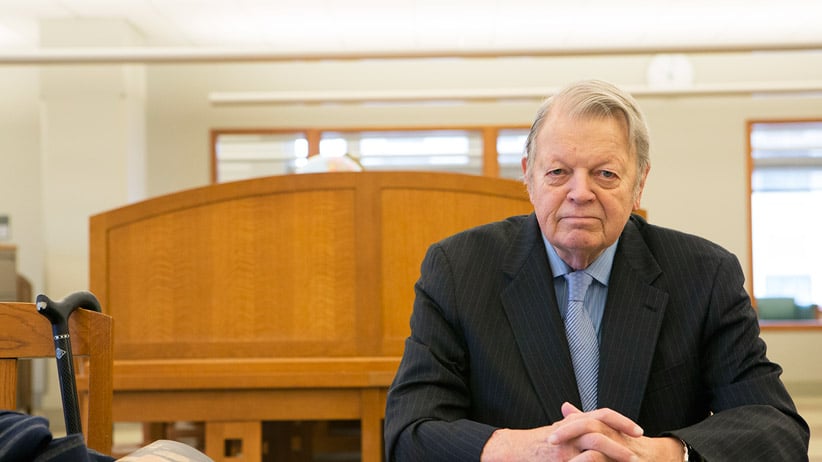 At 80, Garry Wills—Pulitzer prize-winning American historian and eminent, if dissident, Catholic—is as busy as ever. His new book, The Future of the Catholic Church with Pope Francis, is directed at those of his co-religionists who believe their Church is immutable: “It helps, in holding such a position,” Wills writes, “not to know much history.” He goes on to describe deep changes over time, including the rise and fall of papal monarchy, the assertion and non-use of papal infallibilty, and the slow disappearance of confession, as well as what he believes Pope Francis will achieve.

Q: You write that Francis “heartens” or “frightens” Catholics for the same reason: the prospect of change. You have hopes for him, after having none when Pope Benedict resigned. What’s changed?

A: I was not hoping for much from the top down. I thought change should come more from the bottom up, and what makes me so hopeful about Pope Francis is that he also thinks that. He’s not going to try to do it autocratically. He’s very similar to John XXIII, who called together the bishops at Vatican II, but issued no marching orders. He intervened only to prevent some bishops from being frozen out. When a majority of the bishops at the outset didn’t want to take up the whole Jewish question—did the Jews kill Jesus and all that kind of embarrassing stuff—John stuck with Cardinal Bea [the decisive voice in Nostra Aetate, the Vatican II document that repudiated Catholic anti-Semitism], and the others who said it was absolutely necessary to deal with this.

Q: It’s significant, too, for both popes, that change isn’t necessarily something personally welcomed.

A: They both have conservative tastes, in the sense that they both feel that if change is going to come from the bottom up, you have to respect the bottom—folk religion, for instance. They’re both great devotees of the Virgin Mary, knowing that the faith of the people is very deeply expressed in those liturgies and beliefs and feast days. They are conservative in that sense, and in their morality; and both of them know that you have to respect continuity, to some degree. They didn’t just try to clean out the Vatican, to be the Superman brushing everybody else aside. That’s extraordinarily uncharacteristic of the modern papacy, and has made me very hopeful. 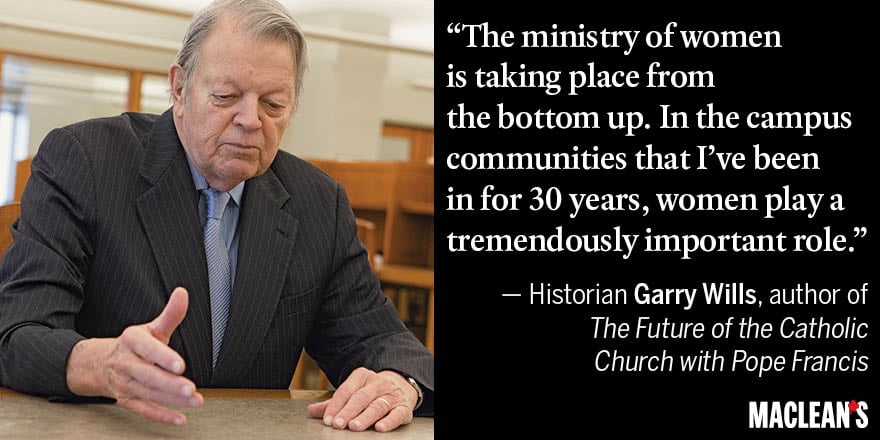 Q: You argue that, historically, popes are most overreaching in their claims when at their weakest—Pius IX, prisoner of the Vatican, proclaimed papal infallibility. Is Francis in a strong or a weak position?

A: His strength is that he doesn’t assert himself alone, the way Pius IX or other weak popes did, when they knew they were not getting their way; the dying lion thrusts his paw and wounds the Earth, as Shakespeare said. I think the assertion of power would be a weakening thing for Francis, and he hasn’t done so. Instead, he’s yielding power constantly. He’s trying to share power, which is really a way to keep it and a way to make change happen. The marriage and family synod last fall seemed like a setback to a lot of people, but I think he handled it very well. Other synods didn’t publish their results, their procedures or anything, and popes could just totally ignore what they said. Francis undercut the whole thing by saying, “Publish.” And I’m glad there was disagreement. That’s not letting the Curia play its game of secrecy and backhanded action. Secrecy was always a terrible aspect of the church. I think Francis handled the synod brilliantly. The openness is the reason for hope.

Q: Your new book is one long setting out of the fact that the Church not only does change, but has to have changed, or it wouldn’t have survived to be the oldest institution in Western civilization.

A: That’s right. It’s been knocked down so often, but it keeps getting up. It’s like Freddie in the horror movies. And that’s because it does change, even when its authorities do not explicitly renounce a former position. They just accept that the people of God have moved on. Things like the ban on usury [and] attacks on democracy were never formally renounced, just defied so often that popes stopped declaring them. Other things are going out now, like indulgences and confession. I think Francis gave a signal of that—of accepting that the people have moved on—during his press conference on the plane back from Manila in January. He called Paul VI “a prophet against spiritual colonialism,” and praised Humanae Vitae, [Paul’s encyclical against contraception], in those terms. Francis also said that we have to have responsible parenthood; people have to work things out with their confessor. That’s what’s happening. Catholics are practising contraception—80 or 90 per cent in the U.S.—and the priests don’t try to interfere, only the bishops. 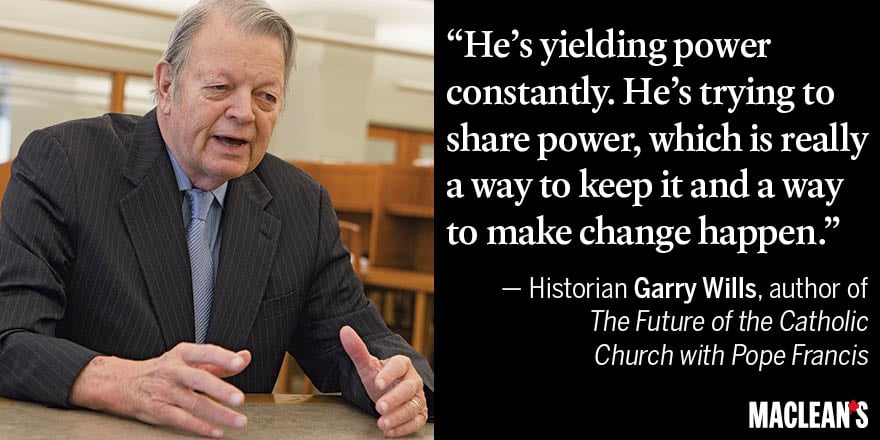 Q: If I understand you, you think that by the “colonial” remark, Francis meant, “When the demand for birth control expresses the desire of developing-world Catholics, as opposed to something imposed by the developed world, then fine.”

A: I think that was the underlying message. Francis, like all Third World people, is very much against colonialism and, in saying the ban on contraception was spiritual colonialism, he was saying that when it’s no longer looked at that way, as colonialism, then it won’t matter, then the teaching will be downplayed and ignored.

Q: Your opposition to much of what has marked the Church, both practices and trappings, is so adamant, you’re often accused of not being a Catholic at all.

A: One of the things I get, even from Stephen Colbert, is, “You’re as bad as a Protestant.” And I’m proud to be. When you say “trappings of the Church,” you’re saying what a lot of people say, that the Church is the hierarchy, or even just the papacy. It’s not. The Church is the people of God, and they have gone through all kinds of change at the top, which has been autocratic, anti-Semitic, misogynist, etc. The faith of the people has been a more constant test of the Gospel.

Q: You believe, then, that actual change is coming, because this Pope is open to what is really there already?

A: Among U.S. Catholics, for a long time, not only do they practise contraception, they practise abortion at about the same rate as Americans in general. They’re much more tolerant of gays than not only the hierarchy, but Protestants. The acceptance of gays among Catholics is irreversible. Catholics divorce and still go to communion; that’s another case where the hierarchy will have to admit that the Church has won, not they. The ministry of women is taking place from the bottom up. In the campus communities that I’ve been in for 30 years, women play a tremendously important role. We’ve had at our place in succession two women who did the preparation for baptizing, the preparation for marriage, the catechizing of the children. They even gave the homily, until the bishop stopped them.

The actual lived equality of women with men is really important and, when one of those two women resigned, students from all around America came back for the ceremony, saying goodbye to her, saying, “When I was having trouble getting through Northwestern [University], she was my real counsellor,” or “She saved my marriage.” People stood up at the mass—she didn’t know this was coming—and gave testimonies. We’d never done that for a priest, so, in fact, she was our spiritual leader. Now, we have a woman who’s just as good. Francis will take us forward, as John XXIII did, as far as we can push. 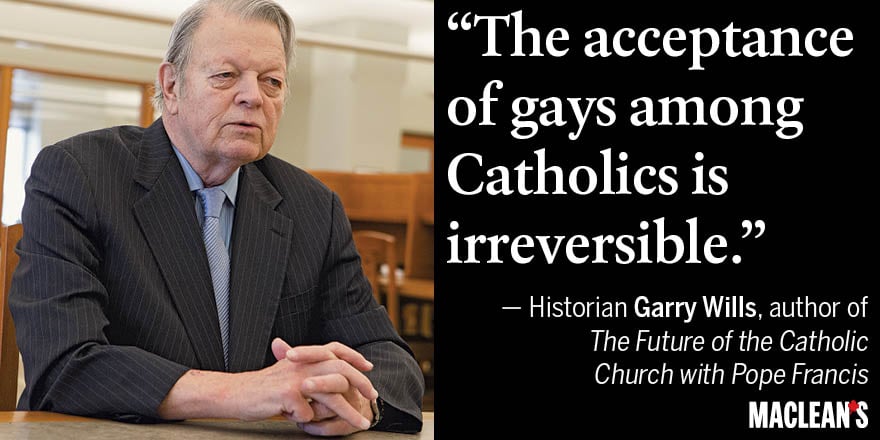 Q: Isn’t there a serious split between First and Third World Catholics on these issues, especially on homosexuality?

A: There’s some difficulty with the developing world. The right wing of the Church especially loves that they have lots of vocations there now, and lots of numbers—and that part of the Church does have the popular faith that both John XXIII and Francis like. But they have not had an Enlightenment yet. Homosexuality is an issue that will have to be worked out, but it will be.

Q: But Francis also has to work with his bishops, most of whom were appointed by his predecessors. You are no fan of your American bishops. Don’t you think Francis will have an issue with them?

A: No. There are holdouts, but already there’s tremendous change: Bishops are less flashy, the whole tone of preaching is much more pastoral or about the poor. Not just the tone—the whole culture has changed. Francis is so popular with the people that I think a lot of them are going to claim, “Oh, I was always for the things he is.” They’re pretty good at hypocrisy.

Q: So you don’t expect a showdown in Philadelphia this September at the World Meeting of Families event?

A: Oh no, the bishops are going to be so anxious to get in the picture with him.