The journey to honour Michelle Lang, a fallen Canadian reporter

There's a bay in remote Saskatchewan named after Michelle Lang, the only Canadian journalist killed in Afghanistan. This summer, a trio of her friends and family went to find it. 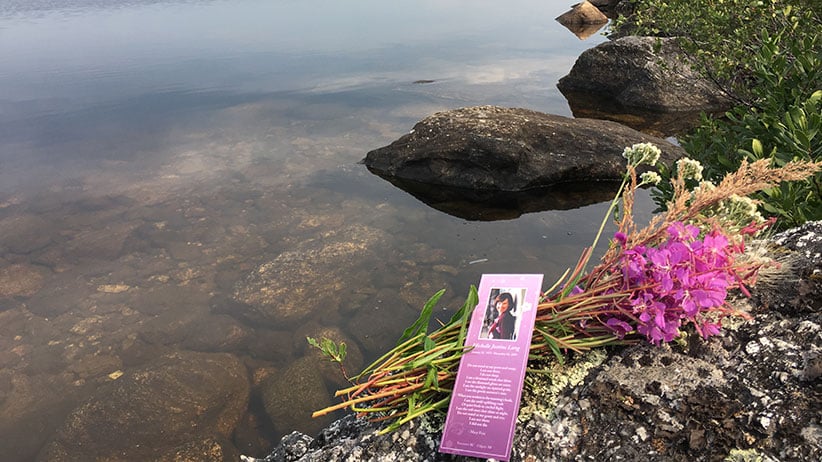 It started with the geographic coordinates on a map: 59 degrees 3 minutes 33 seconds north; 102 degrees 13 minutes 40 seconds west. The latitude and longitude mark Lang Bay, a spot in traditional Dene territory in northeastern Saskatchewan named for fallen journalist Michelle Lang. The 34-year-old, who was born in Vancouver, died alongside four Canadian soldiers in Afghanistan on Dec. 30, 2009, when the armoured vehicle she was riding in hit a roadside bomb. She was the first—and only—Canadian journalist to die in the war.

In February 2015, the Saskatchewan government recognized her sacrifice. The award-winning reporter at the Calgary Herald had previously worked at the Regina Leader-Post and Moose Jaw Times Herald. As a friend and colleague—one of many left aghast and heartbroken by her death—I knew I wanted to one day visit this distant place named in her honour.

Lang Bay is one of nearly 4,000 lakes, rivers, coulees and other geographic features in Saskatchewan named after soldiers, police officers, conservation officers and others such as Michelle who died in the line of duty. “It provides people with a place to commemorate someone,” explained Nathan Friesen, senior archaeologist with the heritage conservation branch of Saskatchewan’s Ministry of Parks, Culture and Sport. “It continues to be extremely meaningful to people—even if they never visit the place, because some of them are incredibly remote.”

Lang Bay is remote, but that didn’t deter her aunt, Catherine Lang, another friend Robin Summerfield and me from trying to find it. The trip took months of planning, and brought us together in Prince Albert, Sask., where my sister and her family live. Catherine travelled from Victoria and Robin from Winnipeg; I came from Canmore, Alta.

We rented a large SUV, driving nine hours—including 450 km on a narrow gravel road—each way to Points North, an air base normally used to fly workers into uranium mines in the area, or fishermen into remote northern lakes around the 58th parallel.

As we drove, we talked about Michelle and our decision to make this trek to a remote location to honour a friend and relative who made the ultimate sacrifice as a journalist. We felt like it’s another way to keep her memory alive. “She would probably be quite embarrassed by all of this attention,” said Catherine, wryly, “but she’s not here to bug us about it, so we can do whatever we want.”

Driving north, we left the boreal forest and crossed into the Canadian Shield, entering a rocky landscape interspersed with balsam poplar, white birch and jack pine. The lakes we passed bore names like Schwartz, Jamieson and Jay Smith, leading me wonder about the sacrifices of their namesakes. I’d later search them: Jay Smith, it turns out, was a soldier who died in the First World War.

On the morning of Aug. 10, we boarded a Turbo Otter floatplane to fly another 138 km northeast to Lang Bay, part of Burnett Lake. It wasn’t the first time our pilot, Dave Hanson, had taken passengers to one of the memorial locations.

The Saskatchewan Geographic Names Program is the continuation of a federal initiative started in 1947 to recognize Canadians killed in action during the Second World War. Thousands of casualties are recognized across the country. The program was transferred to the provinces in 1960, and was expanded in Saskatchewan to include casualties from the Merchant Navy and Korean War. It grew again in 2006 to include Armed Forces personnel, police officers and emergency responders, as well as people of prominence. 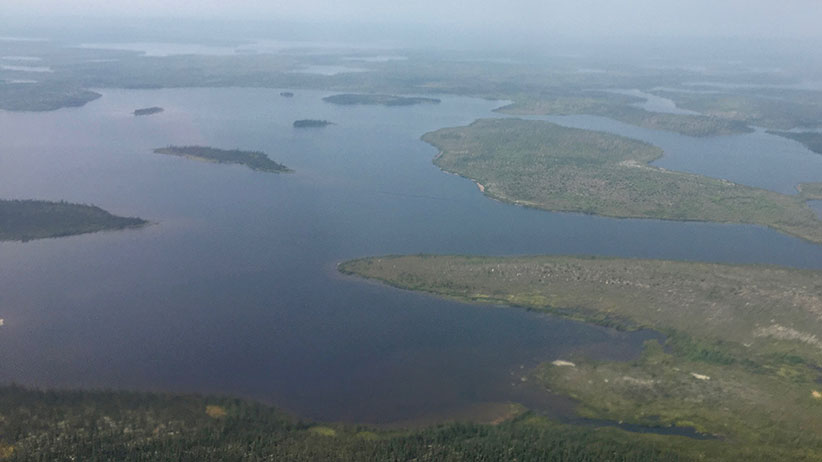 Lang Bay, from above (Colette Derworiz)

Lang Bay, located in an area honouring casualties from the war in Afghanistan with ties to Saskatchewan, is north of the 59th parallel—above Churchill, Man., or Fort McMurray, Alta. “It’s a really rocky area,” Hanson warned in our headsets as we took off. “It’s trees and water as far as you can see.”

There are hills up to 150 metres high in the area. Moose, bears, caribou and wolves forage there; birds and fish are plentiful—many of Hanson’s clients are fishermen looking for that big catch of lake trout, walleye or pike. “This year the water levels are really high,” he said, noting he’s not sure what we’ll find when he identifies our destination.

After 40 minutes of flying, the GPS showed Lang Bay lay over the nose of the plane. Hanson assured us he could land: “It’s just getting to shore—that’s the hard part.” After touching down, he cruised toward the trees and secured the plane in front of a large rock that, then and there, Robin named “Michelle’s Landing.” 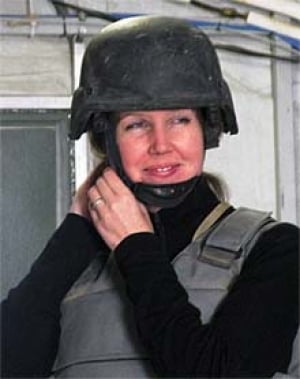 The area had been touched only by wildfire. Some trees are charred, but there was a lot of new growth. Robin marvelled at how wild and pristine it looked, while Catherine was at a near loss for words: “I didn’t know what to expect. It just feels significant, significant in an awesome way.”

Lang Bay is long and narrow, evoking for me Michelle’s tall, slender physique. She would have appreciated its ruggedness surrounded by a vibrant forest—a fitting reflection of her own determination and passion.

We walked through the short trees, sinking into the lush, spongy muskeg as we made our way to Michelle’s Landing, a large, lichen-covered rock.

There, we sat and reflected as Catherine read the poem “Remember” by Christina Rossetti, which Michelle’s mother had discovered in her belongings after she died. It had been handwritten by Michelle on a piece of white paper that Catherine brought along on our trip. The poem asks us to remember a speaker “gone far away into the silent land,” yet urges us not to grieve.

So, in that spirit, we each offered a personal tribute. “We love you Michelle and we miss you,” said Catherine, as we toasted Michelle’s love of life, her dedication to family and friends; her unstinting commitment to her stories, even in the face of resistance or danger. We laid flowers, a pinkish-purple fireweed—one of Michelle’s signature colours—as a loon called and fish jumped out of the water.

Catherine then plunged in for a swim, prompting a joke about “the first Lang in Lang Bay.” As we prepared to leave, we reflected on the journey, and the place. “It’s just very, very peaceful,” said Catherine. “We’re going to carry this with us.”